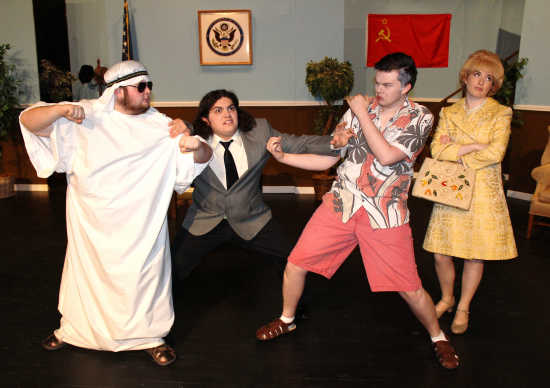 Don’t be fooled by the headline. The water at Greencastle High School is fine to drink, but GHS’s production of Woody Allen’s hilarious comedy titled “Don’t Drink the Water” (staged Friday and Saturday, March 17-18 at 7:30 p.m.) will leave you thirsty for more.

The action takes place in an unnamed European country behind the Iron Curtain. The American ambassador (played by GHS newcomer John Brook) must leave the Embassy for business in the United States, so he leaves his incompetent son Axel (played by Addison Hughes) in charge.

Almost immediately the Embassy finds itself in crisis mode as an American family comes rushing in with Krojack, the head of the Communist police (played by Bryce Whitney), in hot pursuit. Walter Hollander (played by David Maginity) unknowingly took pictures in a restricted area, so the police believe the family are spies.

Walter’s wife Marion (played by Michaela Semak) tries to explain that Walter “held the camera backward. He took pictures of his nose,” but Krojack has the Embassy surrounded. The Hollanders are trapped.

While they are guests at the Embassy, Walter manages to insult a high-class Sultan (played by Ethan Mooney), their adult daughter Susan (played by GHS newcomer Kayde Brook) and Axel fall in love, and the ambassador appoints his very capable assistant Mr. Kilroy (played by Noah Pettit) as temporarily in charge during his absence.

Kilroy immediately comes up with the idea of exchanging the Hollanders for a communist spy in jail in America. Unfortunately, the exchange is called off when the spy commits suicide. This allows Father Drobney (played by Tylan Jones) to assist Axel and Susan with a plan to escape.

Also appearing in the production are Donovan Asbell as Burns, another assistant in the embassy, and an eccentric chef played by Jacob Crawley.

The play is directed by GHS theater teacher Beth Bax. All seats are $6 and are available at the door.