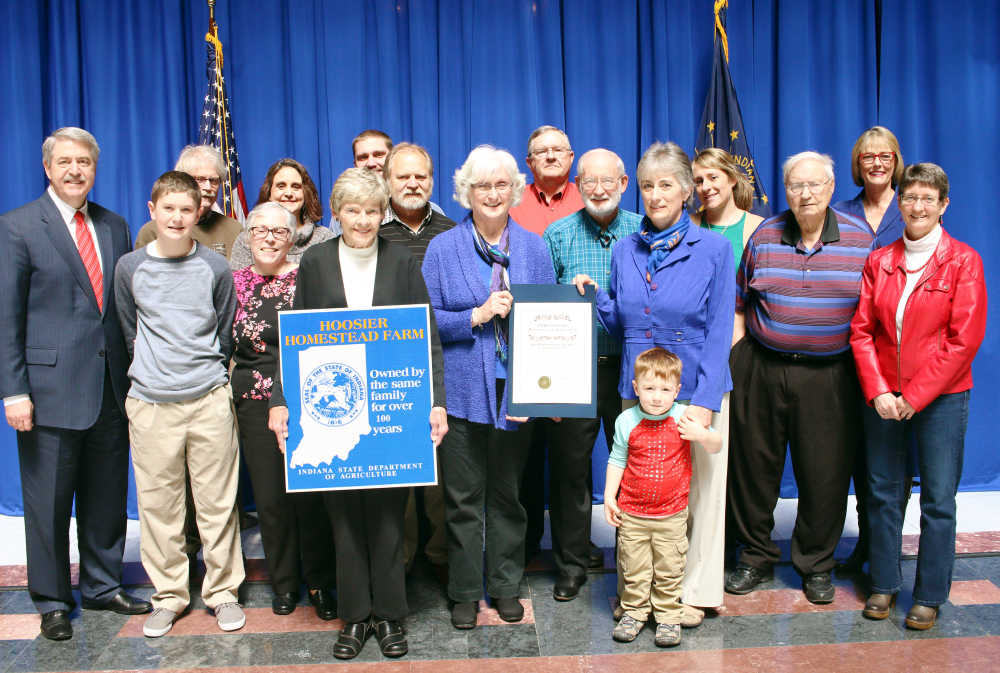 Statehouse photo Members of the Hurst family from Putnam County are joined by Ted McKinney (left), director of the Indiana State Department of Agriculture, Indiana Lt. Gov. Suzanne Crouch (back, right) and other dignitaries Friday in a ceremony recognizing the Hurst farm as a Hoosier Homestead Award winner for 2017.

The Hurst farm, located in Putnam County, was recognized at the Statehouse with a Hoosier Homestead award for 100 years of family farm ownership.

In operation since 1886, the Hurst farm received the centennial award.

“Indiana is home to nearly 57,500 farms, with 97 percent of those being family owned,” Rep. Baird said. “The Hurst farm represents the values of hard work and dedication in rural areas. These family owned farms contribute greatly to Indiana’s economy and deserve recognition.”

Sen. Bray was equally lavish in his praise.

“Farming is a key piece of our state’s economic foundation and our cultural history,” Bray said. “Indiana’s agricultural success can be attributed to hard-working and dedicated families like the Hurst family. I congratulate them and wish them continued success and a bright future.”

The Hoosier Homestead Award Program recognizes farms that have been owned and maintained by the same family for 100 years or more.

Two awards ceremonies are held each year, in spring and summer, to commemorate the achievements of farmers across the state. For more information on the Hoosier Homestead Award Program, visit www.in.gov/isda/2337.htm.