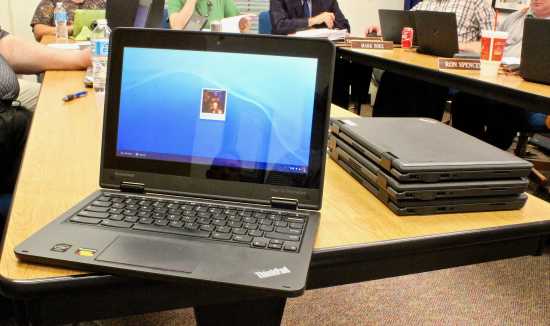 The Lenovo 11e, or “Thinkpad,” will be making its way into the hands of North Putnam students in 2018.
Banner Graphic/NICK WILSON

BAINBRIDGE — As a follow-up to their recent endeavors on the technology front at North Putnam Community Schools, each principal within the corporation gave a collective presentation to their school board Thursday during the April public session.

The end result of an effort known as the 1:1 Initiative, which has existed for some time but has now retaken the attention of the board members, will include hundreds of Lenovo 11e Thinkpads that will be acquired and implemented over a relatively short period of time.

North Putnam High School Principal Jason Chew, who has become a pseudo-spokeman for the group of school leaders, opened the presentation Thursday, explaining the group’s findings from a recent impact analysis that included visiting nearby school districts, consulting with technology experts, testing various devices and collaborating with the community.

“It’s important to remember that what we’re developing in a plain for learning at North Putnam,” Chew said. “Technology is a tool with which we will assist our students.

The impact analysis of which North Putnam Middle School Principal Scott Miller spoke at the corporation’s March meeting entered a new phase Thursday after having recently collected data from several areas of focus.

And at a meeting for the group last month, the principals began to see things a little more clearly.

“It gave us a really good baseline for where we are before we actually start to incorporate technology into the classroom,” Chew said, later noting that a general timeline of 18 months is anticipated. “What I think we heard clearly from teachers, administrators and students is — they’re ready (and) we need to start moving that way.

“‘They’re almost begging for it’ is the term I would use.”

Of the Thinkpads, Chew had nothing but praise.

“We’ve really fallen in love with the Thinkpads,” he said, “because it’s really durable and rugged — these are well-crafted devices to put into teenage-and-younger hands. It has a keypad and a touchscreen … and it’s mobile so those students who like tablets can use it like one. It almost becomes an iPad-type device at that point.”

Helping to introduce the Thinkpads, of which several were present Thursday for board members to examine, was Five-Star Technology Director Steve Ricketts.

Ricketts, who has advised the board in the past, highly recommended the device while providing the costs involved.

“E-Rate is a federally-funded program for schools and libraries to help them with their technology needs,” he said. “It has to do with the government’s push in order for schools to invest in wireless and technology inside their buildings to allow students to have more access to the internet.”

Previous administration hopes come in at 1,000 megabytes of bandwidth per 1,000 students. However, with around 1,500 students, North Putnam currently sits at 150 megabytes for the entire student body, which is hoped to be doubled by the time the Thinkpads are in use.

It is all part of the E-Rate process, Ricketts said.

“For North Putnam, we’re very fortunate that our discount level is at 70 percent,” he said, adding that the school can pay upfront for the devices and receive a 70-percent reimbursement.

And after reimbursement for Category 2 purchases made through the E-Rate system, North Putnam can expect to pay only $14,901.90 for the devices. Furthermore, 40 access points (the like of which Roachdale Elementary already employs) are part of the installation portion of the project, signifying significant savings for the corporation.

The board ultimately approved the purchase of the Lenovo 11e Thinkpads as part of its ongoing Wiring Project at the end of Thursday’s meeting.

More updates are expected to follow at the board’s next public session in May.