A new park bandshell design, featuring an open wood beam ceiling and Indiana limestone supports, has been selected for Robe-Ann Park, Greencastle Park Director Rod Weinschenk told the Park Board at its May meeting.

A Bandshell Committee -- formed under the Friends of the Park group -- has opted for the design of a bandshell like the one at Barrington, Ill., a Chicago suburb, he said. Civil Engineering Consultants of Greencastle will do the design work in a volunteer effort. 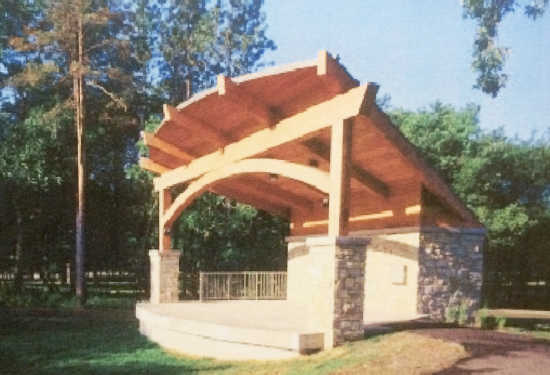 Plans call for the design of a new bandshell at Robe-Ann Park in Greencastle to emulate the one in the Chicago suburb of Barrington.

The new bandshell would replace the 40-year-old Bob Flanigan Bandshell that was demolished in February after it was discovered to be an unsafe and deteriorating structure.

Weinschenk said plans are for the new bandshell to be 40 feet across the front, tapering to 25 feet across the back with a depth of 18 to 20 feet for the performance area.

The limestone bandshell supports would emulate the structures supporting the gates at the Robe-Ann Park entrances, Weinschenk pointed out.

The park director said hopes are to keep the total project cost below $100,000. Donations and grants are expected to fund much of the work with the Celebrate 4 Committee and the Greencastle Civic League reportedly already working on aspects of that effort.

"I've been surprised at how many people have come forward and said they would like to help out," Weinschenk said at the board's April meeting.

No timetable for construction has been announced.

Site of the new structure will be to the northwest of the previous location where the audience was forced to stare into the setting sun during some programs.

The new design also will have an enclosed back to it, park director said to eliminate the chance that the headlights of every vehicle entering the park might shine right onto the stage and into the eyes of the audience.

It is also expected that the new bandshell will be raised up about four feet as well, keeping it out of the floodwaters that tends to pool in that low area of the park when it rains heavily. By raising the bandshell and thus necessitating steps to reach its stage, the area in front of the stage between wide sets of stairs could be used as a riser accommodating musical groups with several members, such as the Covered Bridge Harmony Chorus.

Meanwhile, by potentially including a room for storage behind the stage and a possible "green room" for performers waiting to go on, Weinschenk reasoned "maybe we can open ourselves up to having a play or two."

The new location is also expected to make the bandshell accessible via a driveway to make loading and unloading simpler and keep vehicles from using the grass to do so.

"So we're moving ahead," Weinschenk told the board.

The original bandshell was built in time for America's 1976 bicentennial celebration and was funded by a monetary gift from Chet Coan, the late longtime Greencastle pharmacist.

It was later named in honor of Greencastle native Bob Flanigan, one of the founding members of the legendary singing group The Four Freshmen. Flanigan died in 2011 at age 84.