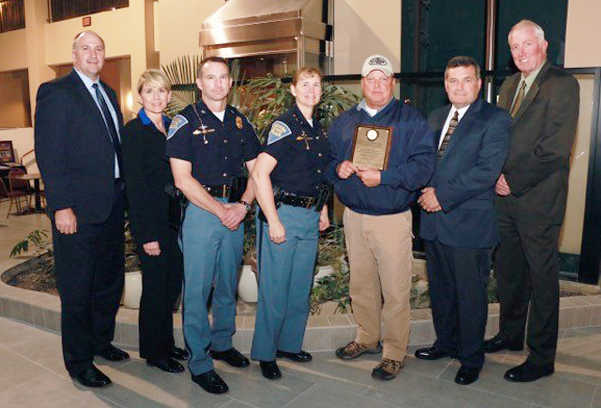 Three officers from the Indiana State Police -- including a Greencastle native -- and two Indianapolis Metropolitan Police Department officers were recognized recently for their primary roles in the development and operational success of the Regional Auto Theft Task Force.

Those recognized with the Bob Sattler Award at the ceremony were:

Each of the officers played key roles in the development and operational success of the ISP/IMPD Regional Auto Theft Task Force, which was established in 2015. Since its inception, these officers have implemented a successful four-pronged approach of Legislation, Education, Enforcement and Partnerships to effectively impact auto theft problems in the Central Indiana Region.

In 2015, Indiana State Police Lt. Elam recognized a variety of problems impacting auto theft investigations, including staffing concerns and increased cases of auto thefts in central Indiana. Also, she determined language in the Indiana criminal code needed to be addressed to effectively enforce some critical felony violations of the law.

Meanwhile, ISP Sgt. Ken Houck has been instrumental in leading and directly supervising Task Force field operations and investigations. Sgt. Houck and IMPD Det. Bryan Reed provided auto theft training at the ISP and IMPD Academy and to other law enforcement officers. They have served as liaisons to the Indiana Secretary of State’s office, the Marion County Prosecutor’s Office, and provided education to Indiana legislators as well as testifying in legislative committee meetings on proposed auto theft legislation.

These officers have created a model for other law enforcement agencies to follow, officials said, adding that their efforts have made a significant impact in communities effected by auto theft crimes in the central Indiana region.

The Bob Sattler Award may be presented to law enforcement, the insurance industry, the National Insurance Crime Bureau, vehicle manufactures or others who have performed an investigation in a superior manner and the results must have had a significant impact on auto theft or related crimes.

The award is named after Robert Sattler of the National Auto Theft Bureau, who in 1960 became the first primary instructor to the Illinois State Police Vehicle Identification Unit.