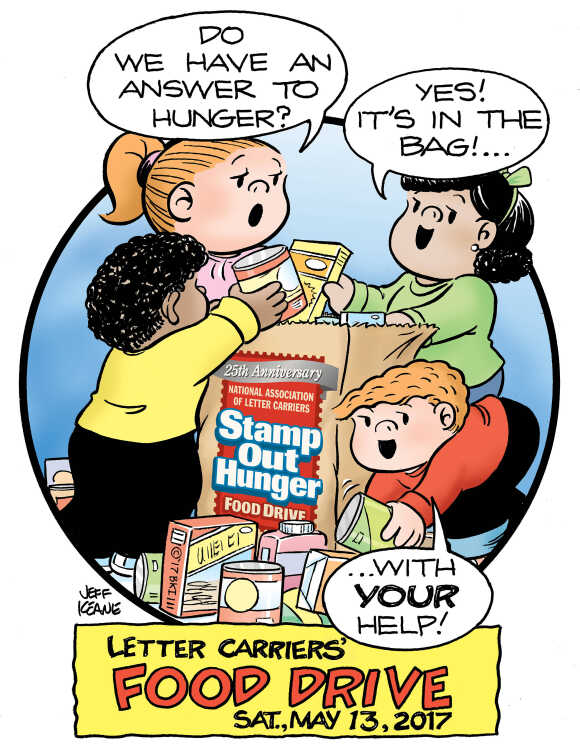 On Saturday, May 13, the National Association of Letter Carriers, the United States Postal Service and other partners are asking communities in Putnam County to take part in the 25th anniversary of one of America’s great days of giving — the Stamp Out Hunger Food Drive.

Postal employees in Bainbridge, Greencastle, Roachdale and Russellville will all take part in the event, which has grown into a national effort that provides assistance to the millions of Americans struggling to help put food on the table.

The Stamp Out Hunger food drive, held on the second Saturday in May, has become the nation’s largest single-day food drive.

Cat and dog food will also be accepted for the Humane Society of Putnam County.

“We’re proud to celebrate the 25th anniversary of the food drive,” Bainbride/Roachdale/Russellville Postmaster Brenda McKinney said. “We’re asking residents for their support to help make this another successful year. It’s easy to make a donation: Simply leave a bag of nonperishable food items by the mailbox to help your neighbors in need.”

The need for food assistance exists in every community in America. According to the U.S. Department of Agriculture, 50 million Americans are food insecure, meaning they live at risk of hunger.

Perhaps most alarming is the fact that nearly 16 million children in America are struggling with hunger.

To participate in the annual Stamp Out Hunger food drive residents are encouraged to leave a sturdy bag containing nonperishable food items such as canned soup, canned vegetables, peanut butter, pasta, rice or cereal next to their mailbox prior to the time of regular mail delivery on Saturday, May 13.

Letter carriers will collect these food donations as they deliver the mail and take them to local food banks.

For more information about the annual Stamp Out Hunger food drive, visit www.feedingamerica.org and www.nalc.org/community-service/food-drive.