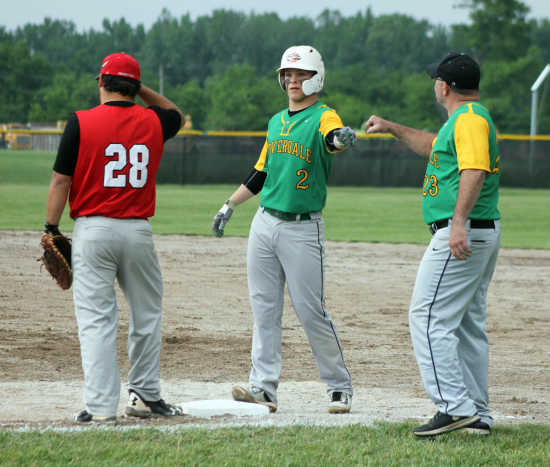 Cloverdale’s Parker Watts (2) gets congratulations from first-base coach Tom Winders after getting a hit on Wednesday.
Banner Graphic/JOEY BENNETT
Order this photo

CLINTON - Just a day after Southmont eliminated Cloverdale from the softball sectional tournament, the Mounties did the same to the Clovers in baseball with an 11-1 win on Wednesday in the opening game of the Class 2A South Vermillion sectional.

The Mounties scored two runs in the second on the first of eight Clover errors, and added three more in the third on a two-run single by Risty Bullerdick and an RBI single by Austin Manion.

Southmont pitcher Cole Wemer retired the first 11 Clover hitters in order before Parker Watts broke the string with a single in the fourth.

Joey Martin was then hit by a pitch, but Wemer ended the threat with a strikeout.

Southmont took advantage of four Clover errors in the fifth inning to add four more runs, before Cloverdale got its only run in the top of the seventh.

Tyce Jackson led off the rally being hit by a pitch, and Jarron Rossok followed with a walk. Watts moved up the runners with a sacrifice bunt, and Martin was hit by a pitch before Wemer was again able to get out of the jam.

The Mounties closed out the game with two more runs in the bottom of the sixth, all as a result of fielding or throwing errors.

Cloverdale managed three hits off Wemer, with the other two coming in the fifth as Noah Winings and Haiden Davis had back-to-back singles.

The sectional championship will be Monday night.

In other baseball action:

• Indian Creek 14, Greencastle 1 — The Braves picked up the victory in five innings.

Blaise Hasty added a 42, while Conner Taylor had a 45, Kyle Tesmer and Jaxon Parmley each shot a 46 and Brett Sosebee had a 51.

“The Cubs played the front nine at Geneva Hills for the very first time, and struggled in knowing where to hit drives and second shots,” Greencastle coach Steve Paquin said. “We are getting ready for sectional on June 2, and going on the road and playing an unfamiliar course is a good way to see where we need work.”

Paquin was able to identify several facets of the game in which his team needs to improve.

“Direction and where to approach the greens gave our players trouble,” he said. “Distance was also a problem on some holes.

“Overall this was a good tuneup against a sectional opponent,” Paquin added. “Practice over the next week will give us needed shots playing summer rules.”

Next match: The Tiger Cubs will play 18 holes Tuesday at Windy Hill against South Putnam at 1 p.m.

Zane Mason of NP scored two firsts, being the first Cougar player to break 50 in the season and also winning his first head-to-head match for the year.

The Cougars play their final team match of the year on Thursday when they host Fountain Central at Twin Bridges golf course.

One week later, the Cougars will participate in the IHSAA sectional at Harrison Hills golf club in Attica.

• Clay City 175, South Putnam 203 — South Putnam’s Tyler Hicks shot a 39 to tie Drew Steward of Clay City for medalist honors, but the Eels came out on top in the team totals.

Ryann Neumann added a 46 for the Eagles, while Jared Seidler added a 58, Levi Girton had a 60, Justin Pitts had a 69 and Thomas Fanning shot a 71.