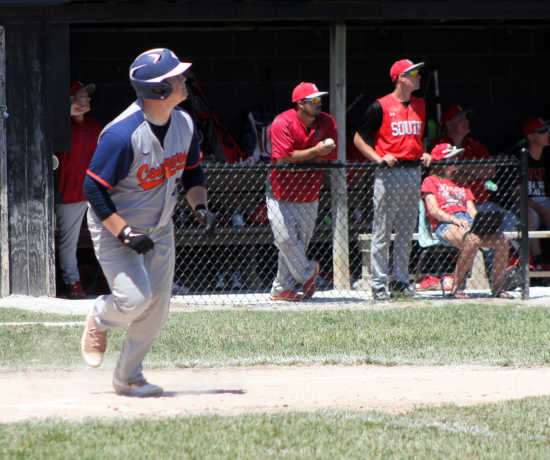 North Putnam’s Jackson Kendall, along with the Southmont bench, watches his long home run sail over the fence in the seventh inning on Monday.
Banner Graphic/JOEY BENNETT
Order this photo

CLINTON — North Putnam put forth a huge seventh-inning rally that fell one short in a 5-4 defeat to No. 13-ranked Southmont in the semifinals of the South Vermillion baseball sectional on Monday afternoon.

Max Haste started the rally with an infield single, and one out later Hayden Rudes followed with another single. Cleanup hitter Jackson Kendall then sent a Cam Chadd pitch far over the fence in left-center field to cut the gap to 5-3, but the Cougars were not done yet.

After making the second out of the inning, the Cougars got some additional life when Evan Davies reached on an error. Kolten Thorson then drew a walk to bring the lead run to the plate for Darrin Tennis.

Tennis hit a sharp grounder to second base that escaped the Mountie infielder and made it into the outfield, scoring Davies. Thorson was thrown out aggressively trying to advance to third on the play, however, to end the game.

Southmont got on the board first in the second inning as Risty Bullerdick was hit byh a pitch, went to second on a wild pitch, went to third on a Chadd single and scored on an error.

The Mounties added three runs in the second with only one hit. Bullerdick had an RBI single, one run scored on a wild pitch and another came home on a bases-loaded walk.

Haste had struck out five straight batters prior to the third-inning rally, and gave way to Kendall in the bottom of the third.

The Mounties got only one run the rest of the way, a single tally in the fifth as Cole Wemer singled, moved to second on an error and scored on another Bullerdick RBI single.

The Cougars can look back at this game as one with many missed opportunities, as they left nine runners on base in the first six innings — including leaving the bases loaded twice — six in scoring position.

Haste led off the game with a walk and was sacrificed to second by Duke Duff but could get no farther as he was retired at third on a fielder’s choice.

In the second inning, Jake Powell led off by being hit by a pitch but was rubbed out on a double play. Duff, Rudes and Kendall then drew consecutive walks before Wemer got tough and picked up a strikeout to end the threat.

In the fifth inning, Haste double with one out for North Putnam’s first hit.

Duff walked and Rudes singled, but Wemer was able to get the last two outs and again avoid damage.

Kaine Benge was robbed of a hit to end the inning, as his low line drive was caught by the Mountie centerfielder on one of the key plays of the game.

The Cougars had another threat in the sixth as Davies reached on an error, was sacrificed to second and went to third on a wild pitch but couldn’t make it the final 90 feet home.

North Putnam averted more danger in the fifth, as Benge snagged a line drive off the bat of Ryan Stanley and threw to Haste at third for a double play.

Rockville defeated Monrovia 16-3 in the second semifinal game on Monday afternoon, and played Southmont on Monday night for the title.

Information not previously available on sectional action from last week:

• Rockville 12, South Putnam 3 — Dylan Wood, Tanner Pistelli and Kyle Hall each had hits for the Eagles, while Wood scored two runs and Pistelli crossed the plate once.

Jackson Wood, Pistelli and Kody Britton each had an RBI.

• Greencastle 25, Indianapolis Washington 1 — The Tiger Cubs racked up nine runs in the first inning and 15 more in the second inning as they easily won their sectional opener.

• Danville 3, Greencastle 1 (eight innings) — Layna Robinson hit a solo homer for the only Tiger Cub run, while Julia Mundy added a double and a single, Mackenzie Woodall had a double and Grace Paul had a single.

Danville eventually won the sectional by defeating Beech Grove 6-0 in the final game.

“The Cougars had a good handle on the outright lead and win,” NP coach Earl Hall said. “Unfortunately, all four NP players struggled mightily on the ninth hole and what appeared to be a sure victory melted away with some missed shots and some missed putts.”

The Cougars now have a week off, and their next appearance on the course will come in the sectional at Harrison Hills in Attica on Friday.