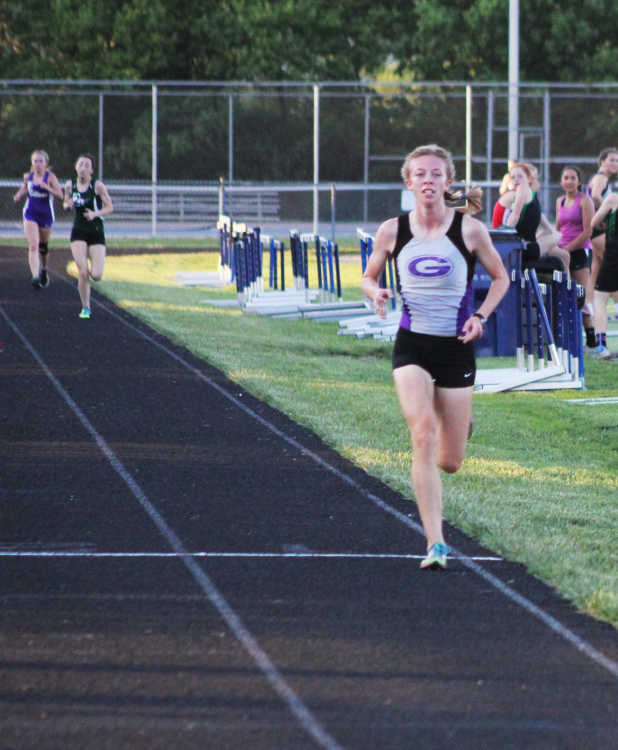 Greencastle’s Emma Wilson found herself in a familiar position in the Terre Haute North sectional, far ahead of the competition.
Banner Graphic/JOEY BENNETT
Order this photo

Hundreds of Indiana high school girls have completed the 1,600-meter run in track and field competition this spring.

Yet among the thousands of races run by those athletes, none of them has finished faster than Greencastle sophomore Emma Wilson.

After her regional record-setting performance at Bloomington North on Tuesday, Wilson is now the top-seeded 1,600 runner going into Saturday’s IHSAA state finals at Indiana University.

And had she run the 3,200 just .59 of a second faster last week, when she broke her own regional record, Wilson would also be the top seed in that event.

Greencastle coach Craig Jordan has used a strategy involving putting Wilson into some shorter races she would not normally run to help her continue to develop.

"Emma's performance at regionals was one we've been waiting for," Jordan said. "She's been training well all season but due to the weather of spring and trying to accomplish team goals, she has only had a few opportunities to run fast in her main events.

“Our approach to her season has been to get as fit as possible in preparation for state," he added. "Since she has competed at state every opportunity she's had, we felt that it would be short-sighted to focus on any particular meet before then. She's come to practice each day with a lot of positive energy."

Some of those names should sound familiar to followers of Wilson’s running exploits — as Schwartz won the state cross country meet last fall, while Geisler was fourth, Bates was sixth and Wilson placed eighth.

Of the five runners ahead of Wilson in the 1,600 last year, four of them graduated and the lone undergraduate did not qualify for the state finals this year. Korte was one spot behind Wilson last year, finishing seventh.

In the 3,200, the top three finishers from last year’s state finals graduated, Geisler placed fourth and another Carmel runner (Sarah Leinheiser) was fifth but did not make this year’s finals.

“I’m uncertain of her chances to win both races,” Jordan said, “but I strongly believe she will reach her goal of placing in the top three for both.”

Jordan noted that Wilson has been helped by running with and against male team members.

“It’s obvious Emma is above average when it comes to running talent,” he said. “Along with that, she is very coachable and has an older brother on the team [Clayton Wilson] that she loves to chase after, and a great training partner in Ben Gellman. It is fun to watch them run together, as they like to playfully tease one another in regard to who has the faster 1,600 or 3,200.”

“While she does not run as much as they do, that does not stop her from wanting to beat them,” Jordan said.

Emma by the numbers