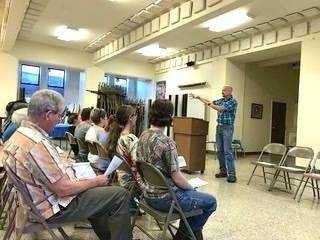 The $10,000 grant was awarded to a team made up of Transformers, Beyond Homeless, Delta Theta Tau and Shuee and Sons. Putnam County United Way gave these local entities the opportunity to collaborate in assisting under-resourced individuals and families as they “move ahead” toward a better future by thinking outside the box with a holistic approach to the housing crisis and underemployment of those in poverty.

This work began with the seventh “Getting Ahead in a Just Getting By World” group.

Nine people began the group on April 4, facilitated by Carl Singer with two former graduates as co-facilitators. Six graduated on May 30, when Doug Harms from DePauw University spoke for about 50 people along with four of the graduates themselves.

One graduate shared, “I have never really gone to school or been able to graduate from anything before and this is very exciting. I hope this is the first of many.”

She has a plan to complete her GED and then pursue a college degree.

Another said, “I had low expectations for myself when I started the group because I usually have a hard time following through with things. But I am proud that I didn’t miss any nights, I was on time and am now completing what I started.“

Another said, “My past has shaped who I am but I’m moving toward a new future, knowing now that I can achieve my dreams. My passion is to find ways to serve others.”

She was very grateful for the support and encouragement she has received from the 70-plus volunteers who make “Getting Ahead” a reality. Volunteers provide free meals and childcare and serve as allies to the graduates.

Because of the partnership with the grant, more follow-up was offered than has been offered before. Lyn Smith, of Beyond Homeless, came several nights to meet the participants and build relationships with them, explaining she was willing to meet with them one-on-one on a weekly or bi-weekly basis once the group was completed to help them work toward their future goals while offering incentives as vouchers for needed household items.

Ruth Myers, a member of Delta Theta Tau, was also able to rent her own storage unit with help from the grant and obtain a 501c3 status for benevolent work she has already been doing in the community. She works closely with Shuee and Sons to help those who need appliances for setting up a house.

“Getting Ahead in a Just Getting By World” work groups have been offered in Putnam County since 2013, resulting in 41 graduates who “feel more stable, have developed more social connections, and have improved their housing and/or job situation,” coordinator Lori Miller said. “This grant expanded services and brought more of the community together to help our neighbors.”

Relationships and resources are built that lead to a new plan for the future called a “future story.” Transformers offers other programs that also help our neighbors create a strong social network and connect to appropriate community resources including TALKS youth mentoring at Greencastle Middle and High Schools and Cloverdale High School. Transformers is also supported by the Putnam County Community Foundation.

The next Getting Ahead work group will be offered in Cloverdale this fall.

Anyone interested in participating or volunteering should contact Lori Miller at gctransformers@gmail.com or call Gobin Church at 653-6010.