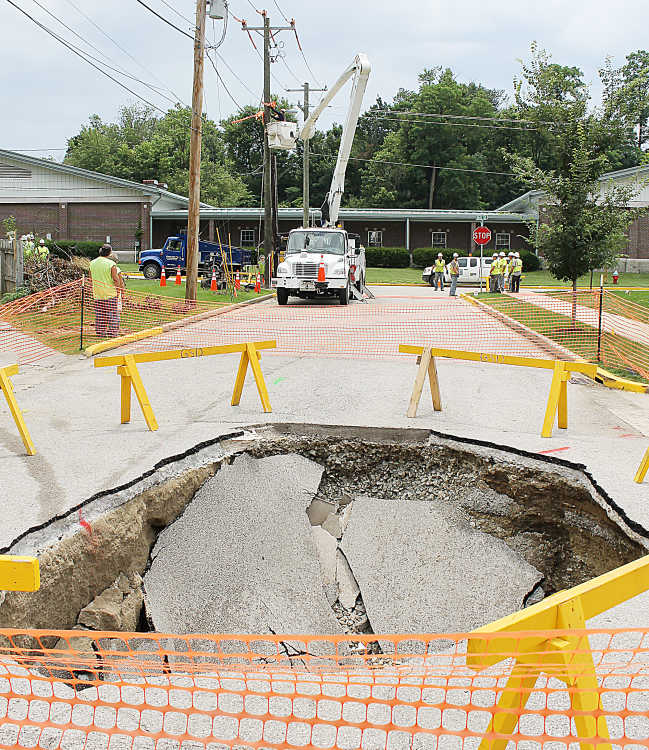 Duke Energy crews work in the area of South Market and West Hill streets in Greencastle Monday afternoon after a portion of Market Street collapsed over the weekend.
Banner Graphic/JARED JERNAGAN

The problem forced the closure of Market Street between Seminary and Hill streets.

The large sinkhole came to light Monday morning when a Republic Services driver could not get his garbage truck through the area around 5 a.m.

Phillips estimated that the hole is 18 feet wide by 22 or 23 feet long with an approximate depth of 14 feet.

“With all the hard rains, the stuff we’ve been getting, it’s a wonder we didn’t get more,” Phillips said.

On the other hand, Phillips said he did not expect anything this major.

Beyond closed the street, the city is delayed in its response to the problem while Duke Energy moves a buried cable. When the street collapsed, it broke the old line that carried power to several condominiums in the area.

Once the cable is relocated, the city will be able to begin work on excavating the area and fixing the collapsed pipe.

Two potential complicating factors include a gas line and a sanitary sewer in the area.

The closure of Market Street is for an indefinite period until the problem can be fully addressed.