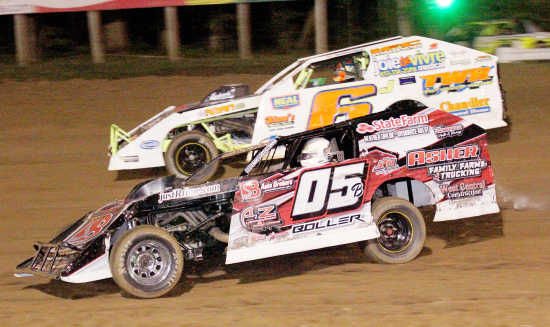 Josh Boller (No. 05B) and Jay Humphrey Jr. (No. 661) battle side-by-side during the opening lap of the UMP Modified A-main Saturday at Lincoln Park Speedway. Boller recorded his third feature win of the season at LPS.
Carey Fox photo

He certainly wasn’t the only one to have a smile on his face at the Putnamville oval.

Carmichael had a rocket ship for a race car this weekend and piloted the Jamie Adams-ownded No. 2A to victory lane to win the “Slick Griffin Memorial” race for UMP Super Stocks and the $1,000 winner’s share.

Wes McClara and Steve Peeden won the heat races to set up the 25-lap A-main special event this weekend. However, an early wreck would shape the remainder of the race.

McClara and Peeden made contact in turn two of the opening lap that started a melee up front. Peeden ended up axle deep into infield mud created from Friday’s heavy rains. McClara was forced to the pits with apparent radiator issues and Jonny Newgent endured a roll over that left him uninjured yet upside down on the back stretch.

Defending champion Ralph Groomer went to the work area to iron out some issues before the field could re-start.

Once the field went green, Carmichael wasted little time making his move. He split the cars of Chris Harcourt and Jack Campbell up front to snag the lead on the third circuit. From there, Carmichael set sail and started to build an early cushion while in fact running the cushion on the top of the track.

Peeden and Groomer, forced to re-start from the back of the 15-car field, began dispatching the competition and picking their way to the front. Carmichael lead Harcourt as Campbell and Doug McCullough briefly ran side-by-side before Campbell retired with mechanical problems on lap nine.

By the 10th lap, Groomer began to challenge Carmichael for the top spot, but Carmichael wasn’t going to let up on the throttle, mashing the gas and ripping the cushion on the point.

With five laps to go, Carmichael had build a several car length lead over Groomer as McCullough pulled off the track while running third. Peeden took over the spot and briefly challenged for second. However, at the checkered flag it was Carmichael taking home the victory ahead of Groomer, Peeden and Cullen Goodman, who started 16th. Harcourt wrapped up the top-five.

Twenty-eight UMP Modifieds rolled into the pits last weekend at LPS and it was a very happy Josh Boller contingent as the Greencastle hot shoe claimed his third feature win of the season.

Sterrett looked like he would challenge for a repeat victory during the early stages of the 20-lap feature as he led Boller, Walters and Randy Shuman. However, Sterrett’s No. 9H began to smoke heavily by lap seven as Boller flew past for the lead on the back stretch. Sterrett would soon pull into the pits as Boller built a solid lead over the second half of the feature.

Boller would survive a restart with several laps remaining to pick up the victory ahead of Shuman. Carmichael Jr. came from 16th to place third ahead of Walters and Kenny Carmichael Sr.

In the final feature of the evening, Cody Wright started on the pole and made it stick as he took the checkered flag in the bomber A-main.

Wright and Josh Litton were door-to-door early on before Wright gained some separation. The two pulled out to a sizable gap as Josh Foxworthy, Megan Cavaness and Gary Hayden gave chase. A three-wide battle developed for sixth position as Tom Cox, David Wallen and Jordan Almanza fought for the spot.

A final re-start with three laps to go set up a dash for the win and Wright hit all his marks to perfection to take the victory. Litton placed second ahead of Foxworthy, Cavaness and Hayden.