'The Foreigner' comedy up next on Putnam Playhouse stage

Show dates are July 13-15 and 19-22. Performances begin at 8 p.m. at the Hazel Day Longden Theatre off Round Barn Road in Greencastle. 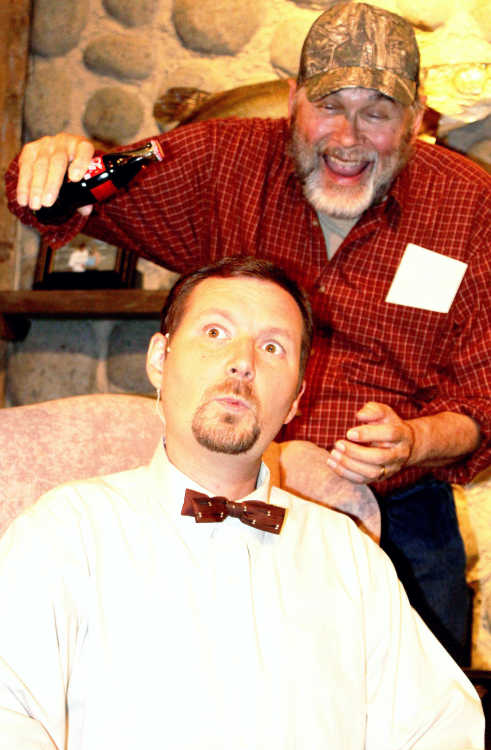 With a maniacal laugh, local thug Owen Musser (portrayed rather uncharacteristically by Bill Wieland) harasses the visiting Charlie (TJ Tincher), threatening to pour a bottle of pop over his head in a scene from the Putnam County Playhouse production of "The Foreigner." The comedy opens Thursday, July 13 and continues its 8 p.m. performances Friday and Saturday this week and again July 19-22 at the Hazel Day Longden Theater off Round Barn Road in Greencastle. Banner Graphic/ERIC BERNSEE

Tickets for all three remaining shows of the 2017 season are available at the box office during each production from 5-7 p.m. or persons may call 653-5880.

"The Foreigner" is a comedy set in the early 1980s in Tilghman County, Ga., at a rural fishing lodge.

The lodge is often visited by Froggy LeSeuer, a British demolition expert who occasionally runs training sessions at a nearby army base. This time Froggy has brought along a friend, a pathologically shy young man named Charlie who is overcome with fear at the thought of making conversation with strangers. So Froggy, before departing, tells all assembled that Charlie is from an exotic foreign country and speaks no English. Once alone the fun really begins, as Charlie overhears more than he should.

Alisa Issacs-Bailey plays Froggy LeSeuer, who along with TJ Tincher as Charlie Baker, set the events in place for hilarity as she initiates the farce that Charlie is a foreigner and does not speak or understand English.

Fishing lodge owner, Betty Meeks, is played by Kathy Arnold. Froggy's friend Betty is infatuated with her new found foreigner and begins to believe she can communicate and understand Charlie.

Lodge resident Catherine Simms, a former Georgia debutant, is played Samantha Flannelly. Samantha and her brother Ellard, played by Cameron Wunderlick, who is believed to be somewhat of a slow learner, are heirs to the family's fortune.

Rev. David Marshall Lee, played by Cameron Callahan, and is Catherine Simms fiancé and minister to the fine folks of Tilghman County, Ga.

Owen Musser, played by Bill Wieland, is the local county thug and has plans to disrupt the tranquility of Meek's fishing lodge.

"The Foreigner" is directed by Jim Green with Tim and Caroline Good as assistant directors.

Set design and construction is by Linda Gjesvold with technical direction by Dustin Bond and Tim Good.

"The Foreigner" is sponsored by Rossok & Co. Insurance and Goodville Mutual.

Meanwhile, the Children's Workshop will be in production July 24-28 at the Playhouse. Additional information can be found at www.putnamcountyplayhouse.com.

Auditions for the Putnam County Playhouse final production of "Laughing Stock" will be Sunday, July 23 at 3 p.m. and Monday, July 24 at 7 p.m. Additional information can be found on at www.putnamcountyplayhouse.com.