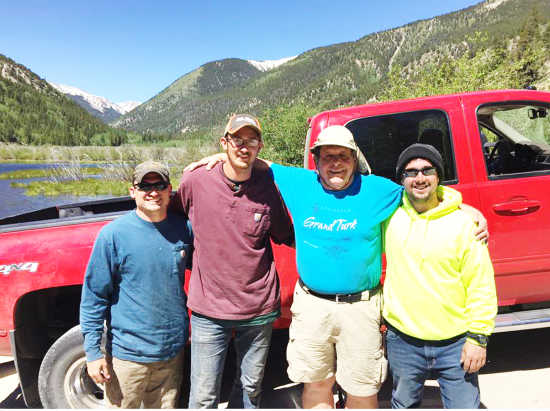 Safely off the waters of a Colorado mountain lake, a 68-year-old Florida man, Don Gudzune (second from right), meets his Bainbridge rescuers who bailed him out of an icy predicament last month, Devon Thrasher (left), Ben Huber and Jonathan Houser. The photo was taken by Bruce Thrasher.
Courtesy photo

And because of that mystical convergence of events that brought Ben Huber, Jonathan Houser, Devon Thrasher and Bruce Thrasher into his life last month, Don Gudzune lives to tell about it -- and perhaps more importantly -- walk his daughter down the aisle at her wedding Friday in Baltimore, Md.

“Heroes walk among you in Bainbridge, Indiana,” Gudzune told the Banner Graphic this week, naming Huber, Houser and the two Thrashers as his saviors.

Gudzune explained that he summers in Colorado to escape the oppressive heat and humidity of the season in Florida and generally stays in the Buena Vista area to engage in his favorite summer sport of fly fishing in the high mountain lakes.

Cottonwood Lake, at 10,000 feet above sea level, was where Gudzune was fishing June 13, while the Bainbridge men had come there for an atypical bachelor party, shunning the traditional lure of bars and strip clubs to enjoy the outdoors in Colorado.

“It’s by pure serendipity for me,” Gudzune said, “that their choice was a healthier option for a bachelor party of sorts.”

The Florida man was out in his one-man pontoon boat, which he described as “basically a belly boat but with plastic pontoons instead of an inflated tube.”

“As one’s feet dangle in the icy-cold, snowmelt-fed lake in this boat, I was wearing chest waders,” he noted, adding that he had fished the lake “many, many times in the past, without incident.”

Gudzune was out in the very center of the lake -- an estimated 50-75 yards from shore -- when he suddenly found himself in the water.

“To this day I have no clue how I slipped off my little boat,” he said.

Compounding the problem, when he entered the lake, his waders immediately filled with icy water. That, he said, made him “weigh about 500 pounds,” so he was not strong enough to lift himself back into his boat.

A friend with whom he was fishing came from the shore in his little boat, but was unable to make any headway against the wind and strong current, so Gudzune was going nowhere fast.

It was then he spied a kayaker -- Ben Huber -- off in the distance and yelled for help.

Huber came over and quickly assessed the situation, the Florida man said. He then called for another kayaking friend, Jonathan Houser, to head over.

“I held onto Ben’s boat with one hand and Jonathan’s with the other as they paddled furiously toward the shore,” Gudzune recalled.

He was still in the water up to his neck between the kayaks as Huber and Houser pulled him and his boat -- he was still inside the tubular frame of it -- and the boat’s dropped anchor toward shore.

“It was a Herculean effort,” he praised. “Ben and Jon were struggling mightily to move all this weight against the wind and strong current.”

By then the man had been in the frigid water more than 30 minutes and “was unbelievably cold.”

That’s where the water rescue nearly turned into a recovery mission.

About 15 yards from shore Gudzune said he suddenly stopped being cold and was “overcome by a feeling of total peace, comfort and extreme fatigue.”

“I told my rescuers I needed to now go to sleep, but ’thanks for the great effort,’” he recalled.

In other words, Gudzune was all but deciding to give up and let go, thinking it was the end for him.

However, Huber and Houser weren’t buying it.

“Ben yelled at me to ‘stay awake and stay focused,’” Gudzune said, adding that Huber kept asking questions to keep him from slipping away.

The two kayakers kept paddling against all odds and got Gudzune close enough to shore where the Thrashers jumped in the water and lifted the man, water-filled waders and all, to the shore.

“They ripped off all my fishing garb,” he said, “began rubbing my extremities to generate warmth, and put me in a truck that had the heater blasting away.”

Gudzune never went to the hospital, even though others recommended he head to the emergency room.

“My daughter’s a physician,” he said, noting that he’s learned the key is “to get warmed up,” so he wrapped himself in warm clothes and blankets and took refuge in his RV, safe and sound thanks to his new friends from Putnam County.

“Had we not been there that day, this man would not have made it,” Huber said in a brief Facebook post about the incident (efforts to reach him via phone or otherwise make contact with the local men were not successful). “I am beyond grateful. God put us in the right place and made everyone realize just how fragile life is.”

“My eternal thanks to these outstanding men for literally saving my life,” he said. “These young people are salt-of-the-earth types. It warms my heart to have met them.

“I hope we can all stay friends for life.”

They already have a good start on that. Gudzune was even invited to Devon Thrasher’s upcoming wedding, although he says he can’t go.

There is, however, another wedding on his mind this week, one he is fortunate to be attending after last month’s events.

After all, he has a date to walk his daughter down the aisle Friday.

“If not for the selfless, heroic acts of these men -- total strangers to me -- my daughter’s big day would have been permanently marred by my absence,” he assured.