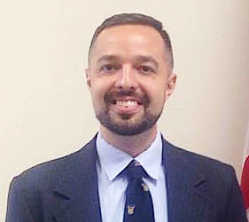 CLOVERDALE -- During a recent special meeting, the Cloverdale Town Council hired Daniel Hofmann as town attorney at a base fee of $20,000 per year.

Hofmann succeeds Allan Yackey, whose retirement was announced during the council’s regular meeting two weeks ago.

In a letter to the council, Hofmann said that he grew up in and is a current resident of Cloverdale. He studied political science and labor studies at IUPUI and later attended law school at the Michigan State University College of Law.

“I am looking forward to working alongside each of you to move this town forward in a positive direction,” Hofmann said in a letter to the council. “I believe that, together, we can make a tremendous impact on this town and its future ... I look forward to teaming with you to help this town and its citizens.”

According to the town’s written agreement with Hofmann Legal, Hofmann will receive $200 per regular meeting and an hourly rate of $110 per hour for all other meetings and litigation. However, if total billings should reach $40,000, the hourly rate will drop to $95.

According to Clerk-Treasurer Cheryl Galloway, former Town Attorney Yackey received about $36,000 per year.

Hofmann stated his position as compliance officer and associate trust officer for First National Bank as a potential conflict of interest.