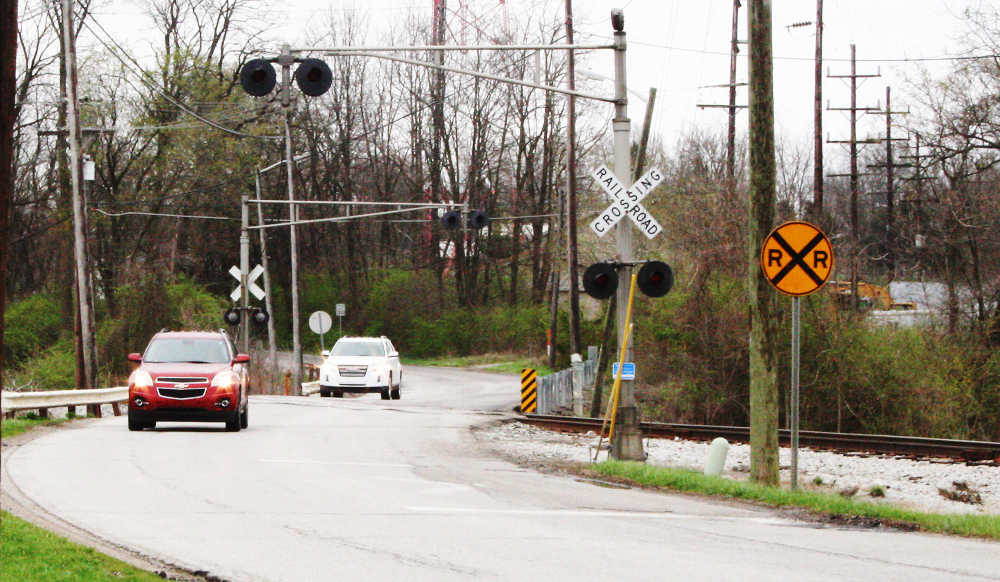 Southbound cars negotiate the CSX railroad crossing on South Jackson Street (Manhattan Road) on Greencastle’s southwest side. The rail crossing is due for major repairs and widening in a $755,966 project running from the western terminus of Veterans Highway on the north to the southern end of the Phoenix Closures property on the south.
Banner Graphic/ERIC BERNSEE

By the time the snow flies, it should be easy sledding for local traffic as major improvements should be in place for the South Jackson Street/Manhattan Road entrance to Greencastle.

A $755,966 bid on that project from J.S. McCullough Excavating, Bainbridge, was approved by the Greencastle Board of Works and Safety during a special meeting Wednesday evening. The project will tackle both sides of the CSX Railroad crossing but not the rail crossing itself.

Mayor Bill Dory called it a “big project” when he addressed the South Jackson Street/Manhattan Road work following approval of the McCullough contract.

“This is a major entrance to our community,” the mayor added before asking the public’s patience during work that could take “five weeks, give or take a week,” he told the Greencastle Redevelopment Commission later the same evening.

The project will run from the western terminus of Veterans Highway at the bowling alley south to the city limits, or roughly the south entrance to the Phoenix Closures property.

The work will widen the roadway “a little bit,” Mayor Dory said, along with upgrading drainage and adding curb and gutter.

Perhaps most significantly, it will also address drop-offs along the east side of the rail crossing, especially were it “sloughs off into a ravine a little north of the tracks,” the mayor noted.

That has been a dangerous spot for years with Greencastle Public Works Superintendent Brad Phillips having to replace the guardrail there several times after cars or trucks hit it because of the narrow S-curve configuration of the crossing.

“It’s a bad crossing,” Mayor Dory said in previous discussions, noting that it was probably put in 150 years ago when the railroad first went through.

“It will still be an S-curve,” the mayor said of the planned repairs. “They can’t take that out, but it will be widened.”

The bid by McCullough -- a local firm which gained notoriety with the city by completing the Edgewood Lake Road project under budget and ahead of schedule a couple of years ago -- was less than the engineering estimates on the project.

Work is expected to begin either late summer or early fall, Dory said, noting that city officials need to confer with the contractor on options for closing the road or managing traffic on site.

It would be cheaper and faster to close the road to traffic, but with the road being a highly traveled route in and out of Greencastle, a temporary traffic signal or use of flaggers to keep the road open are also options to be considered.

“It’s our call, not INDOT’s,” the mayor stressed, adding that permission has already been received to detour over state-managed federal highways U.S. 231 and U.S. 40. Diverting traffic from the work zone is seen as a safety factor.

“We want to sit down with the contractor,” the mayor added, “and consider, ‘Will it be shorter (time period)’ if it’s closed? It might be more pain but less time involved.”

Funding for the project will include $360,000 in Community Crossings dollars through the state, while the city will be responsible for the remainder through EDIT funds, Motor Vehicle Highway and the LOIT distribution.

The work does not include the railroad part of the project, which is estimated at $250,000-$300,000 and would not be covered by Community Crossings funds. The city hopes to get a proposal back from the railroad shortly on its participation in the project.