BENNETT'S MINUTES: Sports site a labor of love for Harrell 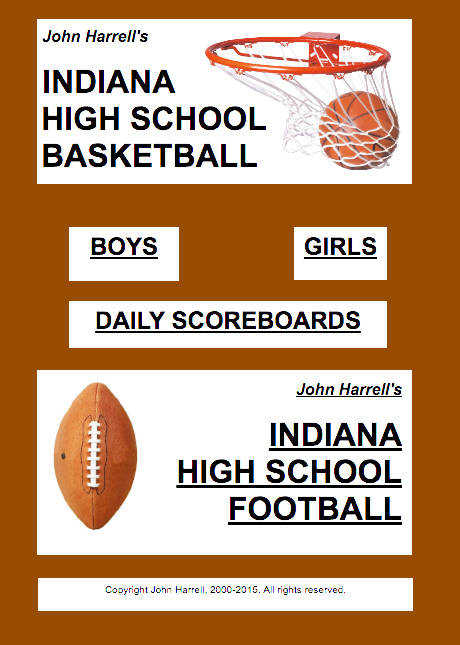 One of the sports department office tasks working for the Terre Haute Tribune-Star in the late 1970s was to constantly update a set of index cards during football and basketball season.

Each team had a card, with its schedule listed, and the sports staff collectively wrote the scores of each game onto each team’s card while also updating its current record. Not every game was called in, however, so there were gaps that needed to be filled. This was the pre-internet days, so we spent a lot of time on the phone calling coaches and/or newspapers trying to get the missing information. (It was amazing how often a team had lost when they “forgot” to call in their results.)

There were cancellations and rescheduled dates, so those would have to be added to the card – often by drawing arrows showing where a game would be inserted later into the season schedule.

Like it sounds, this process was laborious and generally not fun. The information was important, though, so we grudgingly did it as required.

Fortunately, today’s media members, coaches and fans don’t have to rely on such outdated methods for gathering such information – and we have John Harrell to thank for that.

Harrell, a retired sports writer still living in Bloomington, has maintained an amazingly in-depth and accurate website (www.johnharrell.net) for Indiana high school football and basketball (both boys and girls) since the 2000-2001 athletic year that chronicles all scores and schedules for every team. From every game.

Click on a team’s schedule, and you see a list of its games with all scores of past games and an updated record. Want to see a team’s info from there? Just click on the name of the team, and a link takes you to that team’s schedule.

Don’t remember which sectional or conference a team plays in? There are also links to take you to separate pages for those groupings, complete with current records (of course). Want to trace a team’s recent history? Click on the “past seasons” link, and game-by-game and year-by-year information can be found going back as far as 1993. 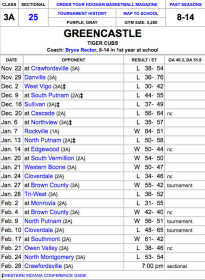 Greencastle boys’ basketball coach Bryce Rector is a big fan of the site, and visits it “multiple times” every day.

“It is without a doubt my most visited website on my computer,” Rector said. “The website is fantastic for coaches in helping us look at our opponents’ schedules and previous game results, which makes scouting easy.

“I create a scouting schedule for our entire coaching staff, which consists of six people going to 15 or more games apiece throughout the year,” he added. “Without John Harrell, creating this schedule and organizing it would frankly take me 10 times longer.”

“The John Harrell site is something I use very often,” he said. “It’s a great resource to find scores and schedules. It makes it easy to locate coaches who might have game films of upcoming opponents. I also find the WIC Conference tab helpful, where you can see how you rank offensively and defensively with other teams in your conference.”

For media members, it’s also extremely valuable in terms of getting information on all of the aforementioned information.

How did this site start?

Harrell was working for the Bloomington Herald-Times and basically saw a need for this information to be compiled in one centralized location. He had been keeping the information on his computer to use in his reporting, and the advent of the Internet made sharing this information with others much easier.

Harrell also wanted to provide information to Jeff Sagarin, who does statistical high school basketball and football predictions and power rankings that take strength of schedule and numerous other factors into consideration.

“I kept all the information throughout the years on my computer, and I thought it was a natural progression to put it online,” he said.

Harrell gets 7,500 “unique” hits per day on the site, obviously slower in the summer months when the teams are idle. The total number of page hits is about 200,000 per day, meaning that the average user may click on 26 different pages during a visit to the site.

“It deadens up the summer,” he said, “but it picks up a lot in mid-December during basketball season.”

Harrell admits that the project started as a “hobby,” but thanks to some Google ads on the site that pay him for each hit on the site there is now some revenue.

“It has turned into a little bit of a business,” he said. “I’m retired, and every little bit helps. It certainly pays for itself, and that’s all it needs. Google sends you a check each month, and that’s nice.”

Harrell relies on a large base of appreciative users to send him team schedules and information on game results. He will make a request on Twitter for missing scores each night, and eventually runs down all the information needed.

“Twitter helps, but I did it before Twitter,” he said. “A lot of the scores came from the Associated Press in the beginning. A lot of missing scores I would get from my message board, where people would leave missing information. I get most of them from Twitter now – Twitter has made everything so much easier.”

The 2016-17 season was the first year that Harrell didn’t have access to AP content, but social media has made that news service unnecessary for his purposes.

Harrell admits to not possessing extensive HTML coding knowledge, but he has done all the legwork for the site using a common, everyday program that millions of people use every day.

“I coded all of the links in an Excel database, and wrote macros on it,” he said. “I need to change it, and when I do I’ll need to go to another web host because they can’t handle a database-driven site.

“One of my goals is to get involved with box scores someday,” he said. “That would be such a help, especially to newspapers. Before this, it was difficult to keep standings for a conference because you had no idea what the other teams were doing.”

Some people have suggested that Harrell create a mobile app for the site, but he doesn’t think that change is necessary.

“You can just go to the site and save it to your phone,” he said. “I have it on m iPad, and it works well there.”

Harrell’s love for newspapers and sports is the inspiration for investing so much in this site. A great deal of time is spent in the spring and summer months inputting each team’s schedule, and football games are almost exclusively on Fridays so the number of nights he’s on the prowl for scores is much lower.

Winter is another story.

“It’s pretty much every night during basketball season,” he said. “It’s not bad on Mondays and Wednesdays, but the rest of the days are pretty busy. On Friday’s, it’s pretty solid from 7:15 to about 11. On Saturday it’s all day.”

Harrell also has a separate list of all the scores from each day.

Another popular feature on the site is a “preview” of each game, in which he lists the available statistical numbers, coaches’ names, results of the most recent contest between the schools and a prediction on the outcome of the game. He utilizes a formula involving the mid-point of team’s offensive and defensive averages to try to determine the winner.

That last feature is one that seems primed for negative reaction from teams who are picked to lose, but Harrell said that hasn’t been a big problem.

“It’s amazing how relatively close it comes to the actual outcome,” he said. “An official told me that he looks at a game on my site to see if it’s going to be a blowout or not. He hates having blowouts. I picked one game last year to be 54-44, and the actual score was 55-45. One of the coaches e-mailed me to point out how close I came.” 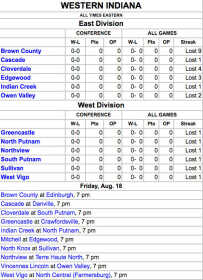 Besides coaches, fans and media members, several players also follow the site to not only try to learn things about the opponent but to see who is predicted to win the game. I was at a game last winter, and a team which had been picked by Harrell to lose came through and won the game. There was predictably negative commentary overheard in the hallway outside the locker room, but it was all in fun.

“I really don’t get any negative criticism on the predictions,” he said. “Coaches would hate to be picked to win, and some of them don’t like when I pick the percentage of a chance to win the sectional. It just adds a little interest to it.”

Cascade would have to fall into that latter category, having been picked to win both the boys’ and girls’ sectional involving several Putnam County teams and winning neither of them.

Harrell worked part-time at the Herald-Press for five years during high school and college, then went to the Fort Wayne News-Sentinel for two years. Harrell’s brother had worked with Herald-Times sports editor Bob Hammel, and that association led him to Bloomington.

“When that gets in your blood, you’ll keep doing it,” he said of his sports writing career. “You don’t get paid a lot, but it’s fun.”

There will obviously be an eventual point when Harrell will no longer have the ability to maintain the site. Users shouldn’t worry about its future existence, though.

“I’ll keep going until I drop, I imagine,” he said. “I think my son would probably take over. He has a little interest in this. He hasn’t written for a newspaper, but he has a lot of interest in the game.”

Harrell thinks the site is important in order to keep a dwindling fan base alive.

“There aren’t as many young people caught up in following high school sports as there used to be,” he said. “It’s all about college basketball for a lot of people. High school basketball has tailed off in terms of attendance and fan interest.”

Harrell does not get to a lot of games these days, but makes an occasional appearance.

“I think the players are much more talented now,” he said. “To see kids who are 5-8 to go on a breakaway and dunk….. that never happened in my day. I don’t know if the team play is there as well as it was.”

One recent appearance was at Huntington North High School, which wanted to honor him for his contributions to high school sports. The game was on a Friday night, however, and he had some trepidations about going.

“I said I didn’t think I could do that,” he said, noting he didn’t think he could be away from home and neglect the web site. “They hooked up my laptop so I could get the Internet, and by the fourth quarter I was starting to put scores on my site.

“I stayed an hour after the game working from the gym, and they were still cleaning up when I left.”

As if more evidence is needed for Harrell’s endless dedication to the site, he also related a story from Thanksgiving weekend last year.

“I was in Canada, because we have a daughter who lives up there,” he said. “The boys’ season was starting, so I was updating the site from up there. It’s slower on my laptop, though, and the Internet connection wasn’t as good.

“It was good to get back home.” 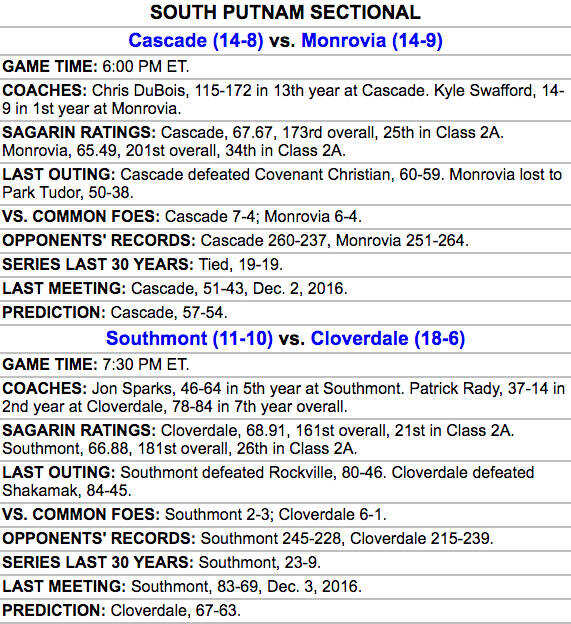 Links
Respond to this story