BAINBRIDGE -- A 12-week Putnam County Sheriff's Department investigation came to a head Tuesday evening when the service of a search warrant led to the arrests of two northern Putnam County men.

While serving a warrant at 221 W. Depot St. in Bainbridge, a group of PCSD deputies located approximately 1.5 ounces of methamphetamine, a pair of firearms and a motorcycle reported stolen out of Clay County. The VIN number on the bike had reportedly been altered. 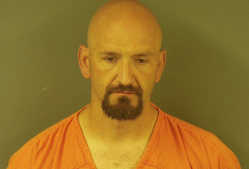 Finding nine people at the residence, the deputies called for backup, getting it in the form of other deputies as well as Bainbridge Town Marshal Rodney Fenwick.

Of the people in the home, only two were arrested -- 42-year-old Shayne C. Frost of Bainbridge and 41-year-old Jerry A. Williams of Russellville.

Williams was arrested for Level 6 felony possession of methamphetamine and booked in the jail at 12:15 a.m.

With hundreds of hours in the investigation so far, both Sheriff Scott Stockton and Lt. Doug Nally were happy with Tuesday's outcome.

"This person (Frost) has just been a problem to the community for a long time," Stockton said. "If you want attention as a drug dealer in Putnam County, you're going to get it."

"The main interest was the dealing in methamphetamine but he's also involved in the moving, stealing and selling of equipment," Nally said.

Stockton and Nally estimated that at least 80 percent of the charges that land inmates in Putnam County Jail, even property crimes, are drug-related in some way.

With the accusations of both dealing methamphetamine and receiving stolen property, Stockton hopes the community is a bit safer.

"He is destroying our community. He is a cancer," Stockton said of Frost. "I'm very, very proud of the deputies on this. There are others on our radar and they're going to be getting our attention as well."

Nally echoed these sentiments, pointing out that these issues aren't limited to Putnam County.

"He's been a menace, not just to our county, but a lot of surrounding counties as well," Nally said.

Frost's criminal history bears this out. Just last week, he entered guilty pleas to a pair of charges in Clay County -- Level 6 felony possession of methamphetamine and Level 6 felony maintaining a common nuisance.

In exchange for his guilty plea, charges of Level 5 felony carrying a handgun without a license and Class C misdemeanor possession of methamphetamine were dropped.

Frost was set to begin a commitment to Clay County Community Corrections that he has now likely violated.

Frost has been charged with numerous felonies in Putnam, Clay and Hendricks counties dating back to 1997. The majority of the charges have been related to possesion of drugs, guns or stolen property.

He served just over a year with the Indiana Department of Correction on 2013 convictions for Class C felony possession of a controlled substance, Class C felony carrying a handgun without a license and Class D felony resisting law enforcement.

Formal charges by the Putnam County Prosecutor's Office had not been filed against either man as of late Wednesday morning.

Nally said that deputies will continue investigating their findings from Tuesday.