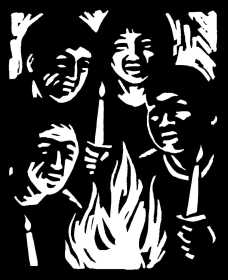 St. Paul the Apostle Catholic Church parishioners are reaching out of their comfort zone in Greencastle to bring the Word of Christ through weekly visits to those at the Putnamville Correctional Facility, formerly known as the “State Farm.”

Catholic services at Putnamville have a long history. For the last 20 years the Catholic prison ministry has been largely under the direction of Teresa Batto. Under her, programs have expanded to include weekly Liturgy of the Word and Communion service, Bible study both in English and in Spanish, Centering Prayer and videos about Bible figures.

Father John Hallowell, pastor at St. Paul Church and Annunciation Church in Brazil, offers mass and the sacrament of reconciliation at the prison once a month.

In addition, Catholic information and the Rite of Christian Initiation sessions are offered in both English and Spanish each year. The programs in Spanish are provided with the help of three Spanish-speaking volunteers: Lorena Gonzalez Martinez, Consuelo Murcia Gurdian and Wilson Martinez.

In the past few years prisoners have looked forward to participating in a Christmas play directed by Batto.

All chapel programs are voluntary and require advance sign-up for prisoners to attend.

“Looking back over my 20 years of volunteering at the Putnamville Correctional Facility, I consider myself blessed because of the many ways that this ministry has enriched my life,” Batto said. “Because volunteer work in a prison comes with some frustration, one learns to be flexible and patient. Despite the frustrations, however, it is a privilege to work with men who are struggling to change their lives for the better.

“It is inspiring to see prisoners who are truly trying to reform their lives.”

For more than 25 years Batto has been volunteering in prisons, starting first as a visitor with Prison Visitation and Support (PVS), a national non-denominational organization that visits federal prisoners. She is now the local coordinator for the 13 PVS visitors in the Federal Correctional Complex at Terre Haute.

One of these visitors is Greencastle resident Charles Miles, who has visited in the PVS program for almost 30 years. After having heard so much about the need, Teresa’s husband Dr. Bernard Batto, professor emeritus of religion studies at DePauw University, became involved with PVS 10 years ago and soon thereafter joined his wife in ministry at the Putnamville Correctional Facility.

Through their ministry at Putnamville, the Battos felt a need for a comprehensive prison ministry program in the Archdiocese of Indianapolis. A couple of years ago they approached Archbishop Joseph Tobin, the former Archbishop of Indianapolis, with their concerns. He responded by appointing a task force to address Catholic needs in all prisons and jails within the archdiocese. These include prisoners’ needs following release.

Since the task force was formed, Archbishop Tobin has been appointed Cardinal Archbishop of the Archdiocese of Newark, N.J., but the local mission continues with the support of recently appointed Archbishop Charles Thompson.

As of July 1, 2017, an Archdiocese Office of Prison Ministry has been established with a part-time director to coordinate work both in men’s and women’s prisons and in local parishes.

From St. Paul the Apostle Catholic Church, the Battos and other volunteers spend 14-18 hours a week with Catholic programs at Putnamville that bring the love of Christ to the incarcerated.

“I walk with them as they struggle to make changes in their lives,” Teresa said. “With God’s help change is possible — as I have witnessed many times, even among those considered the most despicable. Indeed this is what keeps me going back into the prison year after year.”