Eagles miss out on chances, fall 21-0 to Edgewood 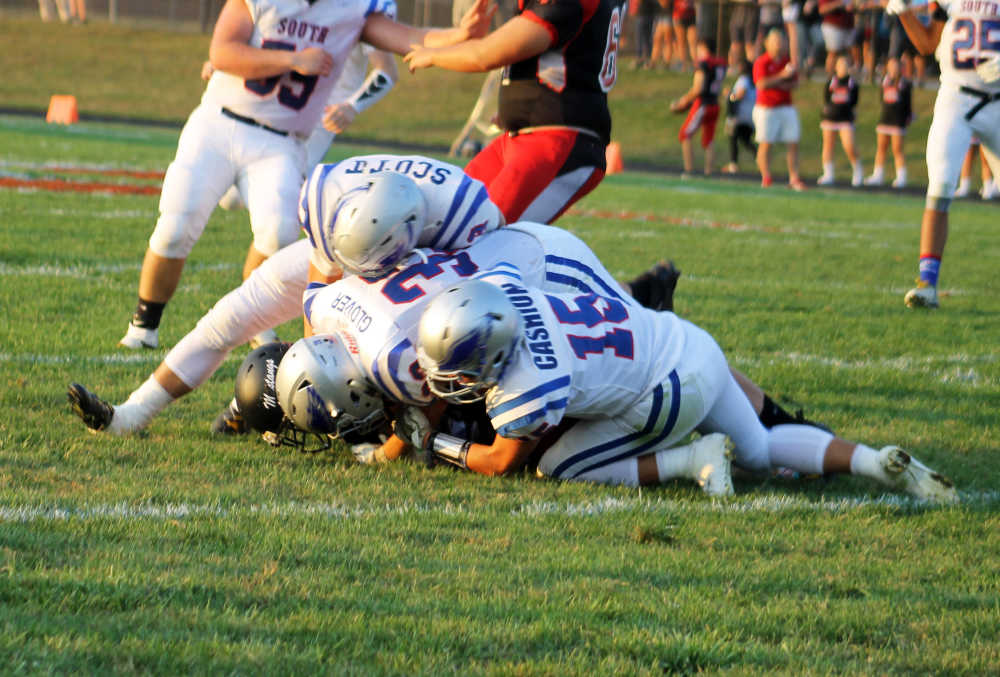 ELLETTSVILLE — With its offense struggling all night to get out of first gear, the South Putnam football team couldn’t overcome a pair of first-quarter touchdowns by previously winless Edgewood Friday night.

Missed opportunities were the story of the night for the Eagles (1-4, 0-2 WIC).

The struggling offense could not follow up on big plays on defense and special teams that included three recovered fumbles, a blocked punt and a 58-yard kickoff return by Kain Gregory.

“We’ve been trying to make the most of the chances we’re given and we keep striking out,” Aker said.

After the Eagle defense surrendered a five-play, 53-yard drive to open the game, topped off by a 22-yard touchdown run by Edgewood quarterback Schuyler Curtis, Gregory’s dazzling kickoff return put the Eagle offense in business.

The sophomore took the kick from his own five-yard line all the way to the Edgewood 37.

South Putnam gained one first down on the ensuing drive, a Christian Zeffel nine-yard completion to Danton Glover, but the drive soon stalled out.

The rest of the first was much of the same, with the Mustangs finding big gaps in the Eagle defense and the Eagles gaining little traction.

A Curtis fumble kept the Mustangs from adding a touchdown on their second drive, but when they got the ball back for their third possession, it took just one play for John McGlothlin to go 47 yards and give Edgewood a 14-0 lead with 1:44 remaining in the quarter.

After that, the Eagle defense seemed to find its footing for most of the rest of the game, which Aker credited to the return of junior linebacker Dalton Scott.

Only a fourth-quarter Edgewood scoring drive marred the remainder of the game for the defense.

But even as the Eagles collected more big plays on defense and special teams, they couldn’t find the end zone.

One thing preventing such momentum was penalties, as the Eagles committed 12 for 95 yards. The coach said this comes down to executing the basics.

“Right now, we’re hammering the basics (in practice),” Aker said. “We’re not doing a good job of coaching it and we’re not applying it on the field. We can’t move on until we figure that out.”

Moving on may prove challenging for the Eagles, who find West Vigo, Sullivan and Northview on the schedule the next three weeks.

Still, after watching Edgewood celebrate its first win of the season Friday, Aker has his mind on a similar situation.

“If we can put something together, we can have a party on the field like they did tonight,” Aker said, “only ours will be in November in the Class 1A tournament.”