Hopkins honored for going above and beyond duty 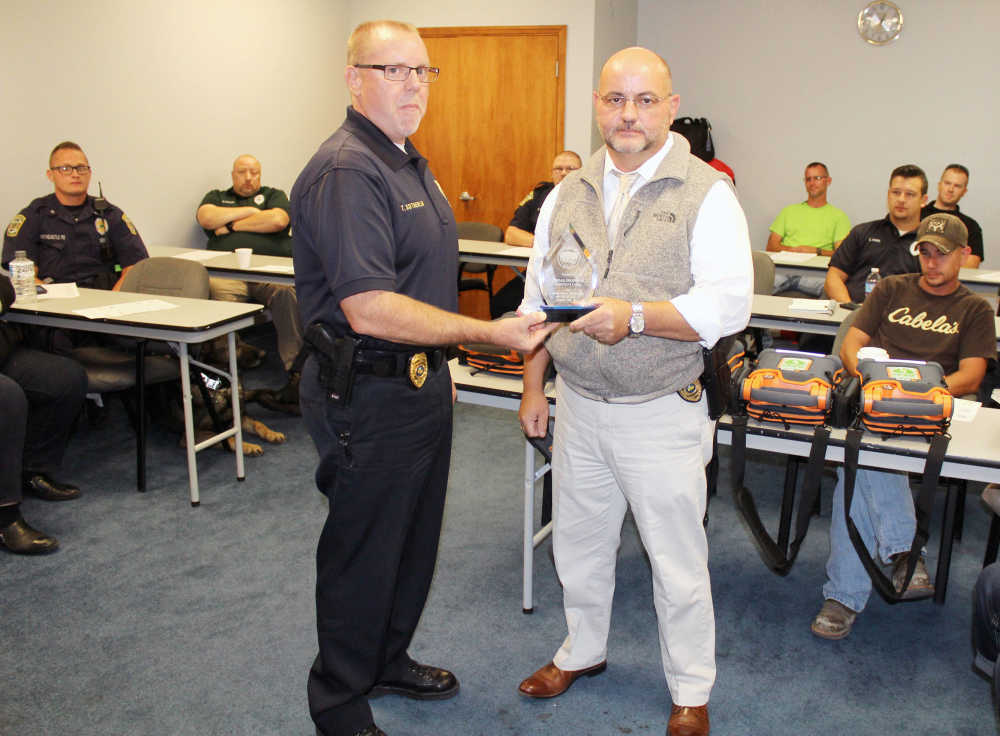 Banner Graphic/ERIC BERNSEE With the rest of the Greencastle Police Department assembled behind him, Police Chief Tom Sutherlin (left) presents an award for actions above and beyond the call of duty to Assistant Chief Brian Hopkins for his actions during a crisis situation on Aug. 17.

With Greencastle City Police officers dutifully assembled Thursday afternoon for training on the new lifesaving equipment, they took time to honor a lifesaver of their own.

Assistant Chief Brian Hopkins was surprised with an award for going above and beyond the call of duty on Aug. 17, 2017.

Before settling into training on the new AED (automated external defibrillator), a portable electronic device that diagnoses and can correct arrhythmia of the heart, Chief Tom Sutherlin read a citation about Hopkins prepared by Capt. Charles Inman.

“I was surprised,” Hopkins said after the squad meeting was over.

He recalled how he had already gone to bed the night of Aug. 17 when the call came in concerning a possibly suicidal person, a medically retired Marine Corps veteran in full dress uniform.

The man’s fiancée told police the 36-year-old was suffering from severe PTSD (post traumatic stress disorder) and seemed intent upon taking his own life through “suicide by cop.”

While responding to the scene, Capt. Inman reported, “I contacted Assistant Chief Hopkins to advise him of the situation. Recognizing the seriousness of the call, Hopkins advised he would be en route from his residence to assist in the investigation.”

In fact, Hopkins was up and out in no time.

“I’m one of those people,” he said, “who prepares everything,” laying out his clothes and all the night before.

Meanwhile, the ex-Marine had gotten into his car and fled his residence near the Armory, heading toward Deer Meadow School in a white Dodge Charger. The troubled soldier was soon located on school grounds, parked in his still-running car as his fiancée stood outside her own vehicle “attempting to talk him down,” Inman noted.

Apparently it was the anniversary of a day on which something very bad happened to the Marine and his unit in Iraq, Hopkins said.

As officers prepared to make contact with him he placed his military dress cap back on his head, put the car in gear and started driving toward the west exit of the parking lot.

”If he had just pushed the gas, it probably would have been over,” Hopkins said, noting that a vehicle is considered a deadly weapon in such a scenario and thus could have been justification for deadly force.

However, Hopkins and Officer Elsiana Crosby had positioned their cars in such a way as to prohibit the reportedly suicidal subject from leaving.

Hopkins then exited his patrol car, and without hesitation approached the Charger. A veteran of Iraq himself, Hopkins identified himself to the soldier as prior military, and immediately worked to establish rapport with him, Inman reported.

“He was in uniform, which is not a good sign,” Hopkins said. “I’m a veteran myself, having served in Iraq, so we had something in common.”

Hopkins also serves on the advisory board of the VA Patient Centered Care and Relationship Based Care, so he was able to address the situation calmly and appropriately. It still took 40 minutes to talk the man out of his car.

“To say the atmosphere surrounding the incident was tense would be a gross understatement,” Inman said, adding that Hopkins explained to the man that it was obvious he needed professional help.

Hopkins promised he would not leave the ex-Marine’s side until he received that needed care. And that meant more than an hour and 10 minutes in the Deer Meadow parking lot and another eight hours at the hospital -- all without getting any of that sleep he had settled in for hours before.

The man was then transported to a Marion Veterans Hospital for evaluation and care, but not without getting Hopkins’ cell phone number.

The two have established a rapport, Hopkins said.

“He seems to be doing better now. I talked to him this morning,” the assistant chief said.

“Soldiers like him that served our country and gave it all is the reason I will stand for the flag,” Hopkins stressed. “I’m 100 percent about helping those that have given it all for our freedom. I was able to gain his trust being I also served in combat and have seen a lot of the same horrifying situation that a person will never forget.”

Hopkins said he stood unarmed before the troubled Marine for more than an hour as several of his police brethren provided back-up in what was “a little stressful for a while to say the least.”

“I cannot stress enough to you how great it feels when you know that I had some of the best men and women in law enforcement standing behind me in a situation that could have been a lot worse,” the 19-year GPD veteran said. “I cannot imagine going on a call like that without them having my six (his back). “

“He maintained courageous calm and displayed true compassion for a fellow soldier during time of crisis. Assistant Chief Hopkins’ dedication, professionalism and humanitarianism reflects well upon the men and women of the police department. His actions on the evening of Aug. 17, 2017 serve as an example for each of us.”