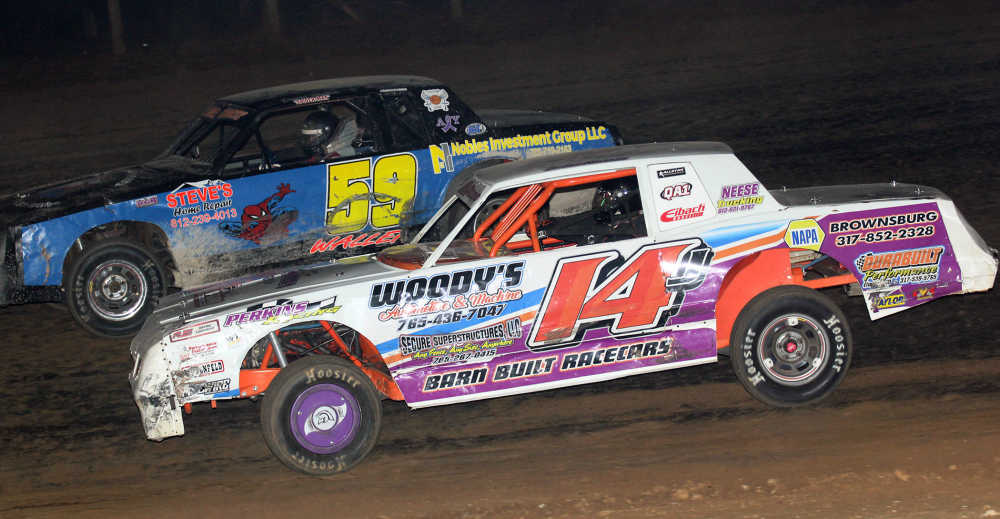 PUTNAMVILLE — Saturday was Champions Night at Lincoln Park Speedway as Brent Beauchamp was crowned as the sprint car points champion for the second time and also claimed the A-main feature win over Jeff Bland Jr.

Kenny Carmichael Jr. edged out his father by 27 points to win his first UMP Modified title at Lincoln Park Speedway. Jordan Almanza was able to hold off a late season charge by Josh Litton to repeat as the bomber points champion by a mere 31 points. Wes McClara narrowly edged out Jonny Newgent for the UMP Super Stock title by 25 points.

The sprint car feature came down to the final two laps at the Putnamville oval. For Beauchamp it proved to be the perfect way to end a season after he had previously clinched the title over Oklahoma’s Koby Barksdale.

Bland took over the lead from pole sitter Tony DiMattia and powered away to a sizable lead by the 10th lap of the 25-lap main event. Bland was setting a blistering pace, ripping along the cushion as Beauchamp gave chase before a red flag for a flip by Collin Parker halted the field. The Martinsville, Ind. driver was uninjured in the crash.

Bland would resume his chase for the win as the green flag flew and the leaders reached lapped traffic with 10 laps to go. Another red flag came out as Josh Cunningham got upside down in turn one and emerged unscathed.

Once the race resumed, Beauchamp was on Bland’s tail tank heading into the final five laps. Bland remained on the top line and appeared to have Beauchamp covered. However, with two laps left, Bland skipped over the turn four cushion and Beauchamp pounced to take over the top spot. The Avon, Ind. driver would stay out front over the last two circuits to pick up his fourth win of the season at LPS. Bland held off Shane Cockrum for the runner-up spot ahead of Barksdale and Jimmy Light.

Heltonville’s Tim Prince recorded the UMP Modified feature win after starting outside the front row and battling past Derek Groomer for the victory.

Prince and Groomer duked it out for the bulk of the 20-lap feature as Rob Brickert and RJ Pruitt were side-by-side for third-place after five laps.

The field began to string out a bit by the halfway mark as Prince settled into the lead and began to stretch out his margin. Groomer tailed by a handful of car lengths as laps ticked off with Pruitt and Jeff Deckard in tow followed by Richie Lex and Kenny Carmichael Sr.

By lap 15, Prince and secured his first LPS win of the season as Groomer, Pruitt, Deckard and Lex rounded out the top-five spots at the checkered flag.

Brazil’s David Wallen saved his best for last on Saturday as he rocketed through the final five laps of the bomber feature to score his first victory of the season on the final points night. Wallen wrapped up the seventh spot in the season points after he bolted past Litton over the final two laps to take the checkered flag.

Almanza had designs on win number five of the year as he lead through the first 10 laps of the 15-lap A-main. However, Wallen, who started 12th, had moved into a battle for second with Tom Cox. The field was bunched tightly behind Almanza with cars shuffling in all directions as Litton running a close fourth followed by Cody Wright and Kevin Kemp.

Wallen made a big charge around Almanza on lap 11 and make the pass stick as Almanza slipped behind Litton over the final two laps. Wright was able to edge into the third spot as Wallen claimed the victory. Almanza finished fourth ahead of Cox.

Steve Peeden had secured the UMP National Championship prior to Saturday, but continued to add feature wins as he got past Newgent with six laps to go in the UMP Super Stock feature.

Peeden and Newgent were door-to-door for four tightly contested laps midway through the feature before Peeden made the pass on the high side.

Peeden would go on to record his 12th feature win at the Putnamville oval. Newgent picked up his 20th top-five spot ahead of McClara, who secured the points title. Bryce Shidler ran fourth ahead of David Wallen.

Saturday will feature the final race of the season with sprints, modifieds, super stocks and bombers as well as the mechanic and powder puff race.