Norton, who returned to DePauw four years ago after a previous stint, has served the university a total of eight years.

DePauw is launching a search for an interim vice president.

“Melanie loves DePauw and has impacted this college greatly,” DePauw President D. Mark McCoy said. “She oversaw the ongoing Campaign for DePauw, which has raised $320 million – eclipsing the $300 goal announced when the campaign was formally launched in October 2014 almost two years earlier than planned. Melanie leaves her division with a talented team and energy that will propel future successes. 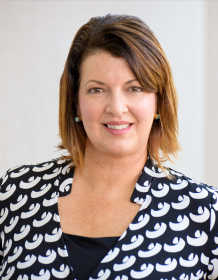 “We thank her for all she has done to make DePauw a stronger and evermore vibrant place,” McCoy added.

Norton has an M.B.A. from Indiana University’s Kelley School of Business in addition to her B.A. from Franklin College and also holds her Certified Fund Raising Executive (CFRE) designation from CFRE International.

Before assuming the vice presidency, she was a consultant in the firm of Johnson Grossnickle and Associates and previously served DePauw for four years as the director of gift planning and major gift officer. She is the immediate past chairman of the board for the National Association of Charitable Gift Planners and led the organization through a hallmark rebranding and name change during the year of her chairmanship.

“I love DePauw and am incredibly grateful for the opportunity I have had to serve this amazing institution,” Norton said. “I start my new adventure knowing that the next vice president arrives at DePauw with a wonderful team, remarkable campaign progress, a beautiful new building and a host of exciting new funding opportunities under Dr. McCoy’s leadership. I am proud of our accomplishments over the past four years and believe the foundation is set for great success.”

“DePauw is a strong institution in large part because of the loyalty alumni show,” Marshall W. Reavis IV, chairman of DePauw’s Board of Trustees and founder and chief executive officer of SVM LP, said. “Melanie has done a terrific job of engaging alumni on every level, making our university an even better place. We wish her well in her new venture and thank her for all that she’s done for DePauw.”

“I know of no other institution with a more impressive board and alumni base than DePauw,” Norton said. “The opportunities here are boundless. I look forward to watching DePauw’s next great chapter with heartfelt gratitude for the opportunity I’ve had to serve.”