PUTNAMVILLE -- A 29-year-old Indianapolis woman had plans to visit a Putnamville Correctional Facility (PCF) offender Sunday morning but ended up behind bars herself. 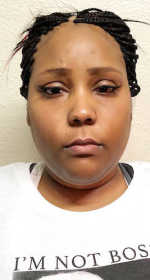 Tonisha Glover was waiting to visit offender Leo Deberry, 37, when she was intercepted by PCF investigators and escorted to the Office of Investigation and Intelligence for questioning by Investigators Angela Taylor and Robert Evans. Upon arriving there, she was read her Miranda rights by Investigator Dave Wire.

During the subsequent interview Glover surrendered 3.1 grams of heroin and 36 strips of Suboxone that she was allegedly attempting to bring into the Putnamville facility.

Glover was placed under arrest without incident and transported to the Putnam County Jail.

DeBerry is currently serving multiple consecutive sentences out of Marion County, including possession and dealing narcotics as well as burglary, theft and escape.

DeBerry, who is being investigated in the trafficking matter and being held in the facility's restricted housing unit, currently has an earliest possible release date of July 16, 2018.