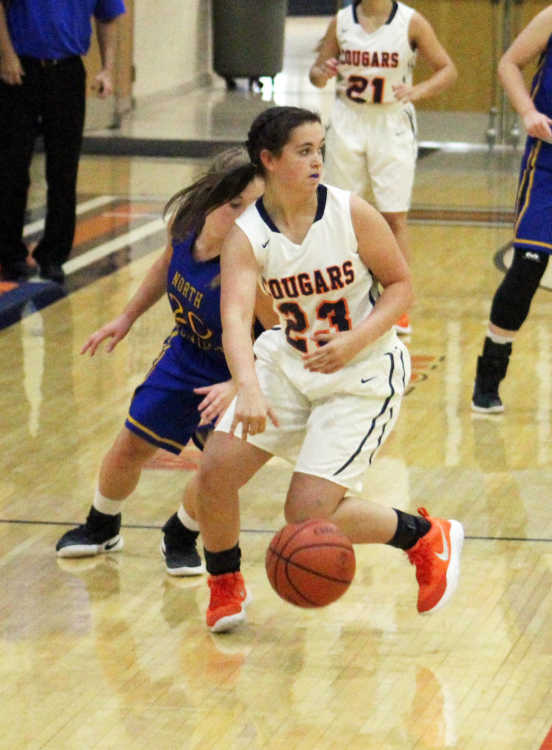 The sophomore point guard picked a pretty good time to get them, though, nailing a pair of free throws with 6.7 seconds left to pace the Cougars to a 28-26 season-opening win over the Falcons.

Sims had missed three free throws earlier in the quarter, but calmly stepped to the line after being fouled and hit both shots.

North Putnam coach Jarrod Duff was pleased for his team, which won just three games on the court last season, to pick up a victory in its opener.

“I’m so happy for them and proud of them,” Duff said. “One of the things we did to win the game we did this summer in the weight room. I give a lot of credit to our girls for that.”

Duff liked his team’s toughness in the victory.

“Our motto this year is that ‘it’s tough to be tough’,” Duff said. “You might have a bad shooting night every now and then, but you can always rebound and always play defense. We won this game because of our toughness and the way we flat-out got after it on defense.”

The Cougars got key steals from Sims and Mia Runnells in the final minute of the game that helped set the stage for the finale.

“We had some kids step up and make big plays,” Duff said. “They aren’t things I can sit there and tell them to do, but they just stepped up and made the plays. This game could have easily gone the other way.”

The Cougars bounced back in the second period with 14 points, taking a 17-16 lead at the half. Kinzey Young had back-to-back baskets to start a 6-0 run midway through the period, and Clarissa Gibson added a pair of baskets after that.

North Putnam turned up its defensive pressure in the third period, allowing just three points and leading 23-19 at the final stop. Dana Tennis hit a 3-pointer to start a 6-0 Cougar run.

In the final period, the Cougars led 25-21 on a Jaden Day basket with 3:12 left, which was their first scoring since 1:31 left in the third period.

North Vermillion scored five straight points to take a 26-25 lead with 1:13 left, and Runnells hit a free throw to tie the game with 1:11 left.

Sims stole the ball with about nine seconds left and was fouled.

Despite the win, Duff saw some areas for improvement.

“We have to be much better offensively than we were [Saturday],” Duff said. “We were so inefficient. We wanted everything to happen off of one pass, and we had no patience. We had some silly, unforced turnovers.

“But if we make our layups, we’re not sweating it at the end,” he added.

Duff pointed to Young, a 5-11 junior who also had five rebounds, as one of many Cougars who showed improvement.

“She’s definitely worked hard, and it shows,” Duff said. “I thought we were a little bit lethargic at the beginning of the game as a team, but Kinzey wasn’t. Skill-wise, she’s a lot better, but most of it is the fact that she has confidence this year.”

Duff has several players he considers to have equal abilities at the same positions, and utilized a scripted platoon system in the first three quarters of the game.

“I’ve never been able to play 10 or 11 people,” he said. “We’re trying to sell them on playing hard when they get their shot, and then whoever played the best would play in the fourth quarter. They made it tough on me.”

The Cougars will play Crawfordsville at home tonight and then travel to Monrovia on Thursday.