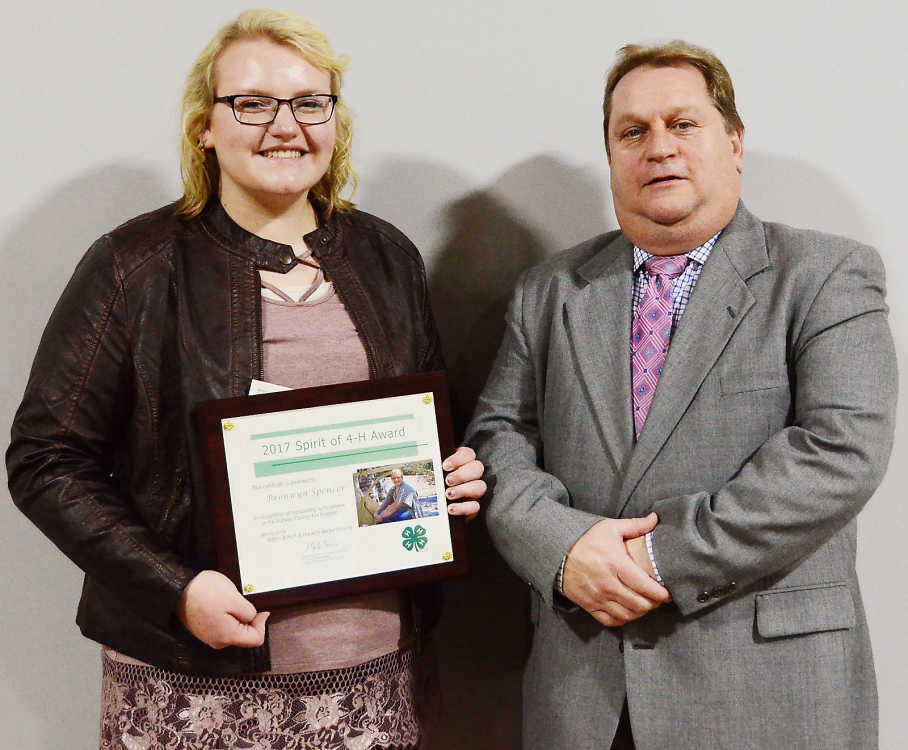 Putnam County 4-H families joined together Sunday afternoon to recognize volunteers and acknowledge the achievement and accomplishments of 4-H members. The highest honor in the local 4-H program is the Spirit of 4-H Award, which is sponsored annually by Bittles and Hurt and Hopkins-Rector funeral homes.

The 2017 winner is Bronwyn Spencer who was presented with a framed certificate and a cash award by Jay Prewitt representing the sponsors.

“We are proud to annually sponsor this top 4-H award honoring an outstanding Putnam 4-H career,” Prewitt said. “The Spirit of 4-H Award has been awarded since 1991.”

Typically there is one winner for the prestigious award. However, twice in the history of the honor, no award was given and there have been two occurrences of awarding two awards in the same year.

Spencer, the daughter of Ronnie and Duston Spencer, is a 2017 North Putnam High School graduate. She is currently a freshman at Purdue University studying elementary education.

Asked what had the most significant influence on her accomplishments, Spencer didn’t have to look far.

“The greatest influence in my 4-H career and biggest motivator has been my dad who always has cheered me on along with my mom who also served as my club leader many years,” she said.

In terms of her experience with the overall 4-H program, Spencer said her “greatest positive moment was being a club officer for many years and serving on the queen court.”

“I especially liked working with the younger Exploring 4-H’ers through the Junior Leader program,” she noted.

Being active in the beef project, Spencer wanted to pay tribute to four 4-H volunteers who really inspired her. Those four individuals are Rick and Rhonda Woodall along with Keith and Mona Smith.

“I have so much respect for them in their commitment to 4-H’ers,” Spencer said.

“Bronwyn will certainly be missed,” Evans said, ”as she helped significantly with 4-H Junior Leaders and engaged with mentoring younger 4-H’ers on many occasions.”

Other awards presented during the afternoon program included recognizing the 2017 First Year 4-H award winners who were Bailey Haddon completing 16 projects while Allison Skirvin and Molly Trammell were second in most completed projects with 11. The top first-year Junior Leader was Jacob Beadles while the top overall Junior Leader was Philisha Sanders.

The awards are based annually on the “My Record of Achievement” forms submitted by the 4-H’ers. Extension staff and 4-H Council members review the forms to determine the award winners.