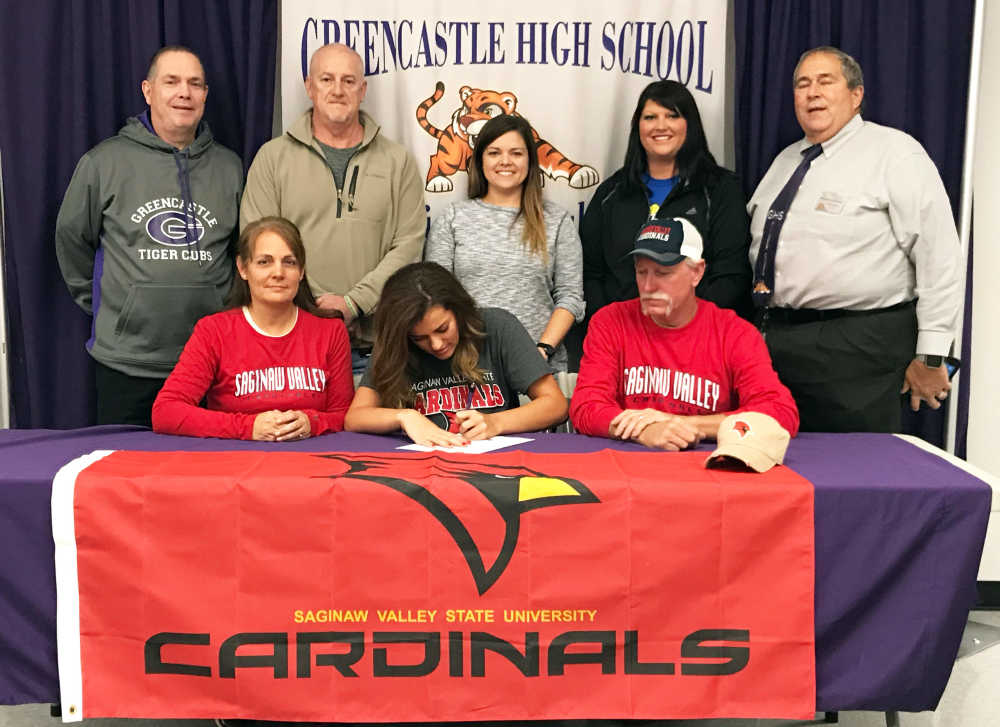 From there, a relationship was built — and on Wednesday the Greencastle senior standout signed the official paperwork to join the Division II Cardinals of the Great Lakes Intercollegiate Athletic Conference.

“I’m so excited,” Mundy said, “to pick a school that I’m truly going to love. It’s going to be a great experience.

“I already know who my roommate is going to be,” she added. “She’s from Indiana, also, and we’re both excited to be going there.”

Mundy is a left-handed pitcher who also swings a strong bat.

On the mound, struck out 47 batters in 68.1 innings of work and allowed 99 runs — about half of which were unearned.

Tiger Cub coach Tabatha Briones is excited for Mundy, and sees success for her both this spring and beyond.

“I am really excited for Julia,” Briones said. “She is a phenomenal athlete, and she has excellent softball skills. She is just an all-around good player and teammate.”

Briones sees Mundy both pitching and playing in the field collegiately. 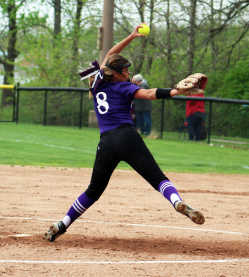 “Her other fielding skills are also very good,” Briones added. “Even though she’s a lefty, I ended up playing her at shortstop a lot last year. Anywhere I put her, she always gives 100 percent — in practice, or off-season conditioning.”

Mundy has played the past two summers for the Indiana Gators travel program, and Briones realizes how valuable that experience has been for her.

“Sometimes it’s difficult for players in small communities like ours to develop in sports like softball, without indoor facilities to use during the winter,” she said. “My players who have played travel ball are the ones who get the most exposure. It’s great for someone like her to get noticed by such a strong program.”

Mundy is appreciative of what she has gained from both the Tiger Cub and Gators programs.

“In the summer, we played a lot of big showcases all over Indiana, Ohio and Kentucky against a lot of great competition,” she said. “I’m busy every weekend, and if my friends want to hang out with me they know the few times that I am free. For the next year, I’m just going to be working out every night to get better.”

Saginaw Valley State was ranked No. 22 nationally last year in Division II, winning the GLIAC conference title and finishing its season 37-16. The Cardinals were eliminated from the NCAA tourney at the Midwest Super Regionals.

“When she gets into their program, which is more rigorous than what we have here, that will help her to improve even more,” she said.

Mundy likes both the successful background of the softball and the SVSU campus.

“I have compared every other college I’ve been to Saginaw, and none of them was close in my mind,” she said. “It’s everything I have looked for in a college. The buildings are so nice and modern.

“Each sport has its own facility to work out in. It’s really nice, and I can’t wait to get there.”

The GLIAC has seven schools which compete in softball, mostly in Michigan with a couple of schools in Ohio.

Some people may consider Michigan’s early-spring weather as a negative factor, but Mundy doesn’t mind it.

“I hate the hot summers,” she said. “I really don’t mind the cold. I will be able to bundle up, and I’ll be fine.”

Mundy will be one of 13 freshmen brought in by coach Todd Buckingham for 2019.

“He said I might get time in the outfield, so I’ll probably play out there first,” she said. “I’m just going to go up there and work my butt off and do whatever I can to help the team.”

Buckingham has led the Cardinals to a 144-85 record in five seasons at SVSU, including three straight 30-win seasons.

Mundy will major in some aspect of business, with plans to go into marketing and sales.

The Tiger Cubs finished 4-14 last year, but ended their season strongly with a 3-1 tournament loss in eight innings to eventual sectional champion Danville.

“Last year when I needed her to play somewhere else I had to pull her from pitching,” Briones said. “This year, our team is going to be filled up enough with better defenders that she’s just going to need to pitch, and she’s going to dominate.”

Mundy was also excited about how last season ended and is looking forward to next spring.

“Last year was rough during the regular season,” she admitted. “Coming into the sectional, everyone worked really hard and did everything they needed to do. We wanted to win so bad..