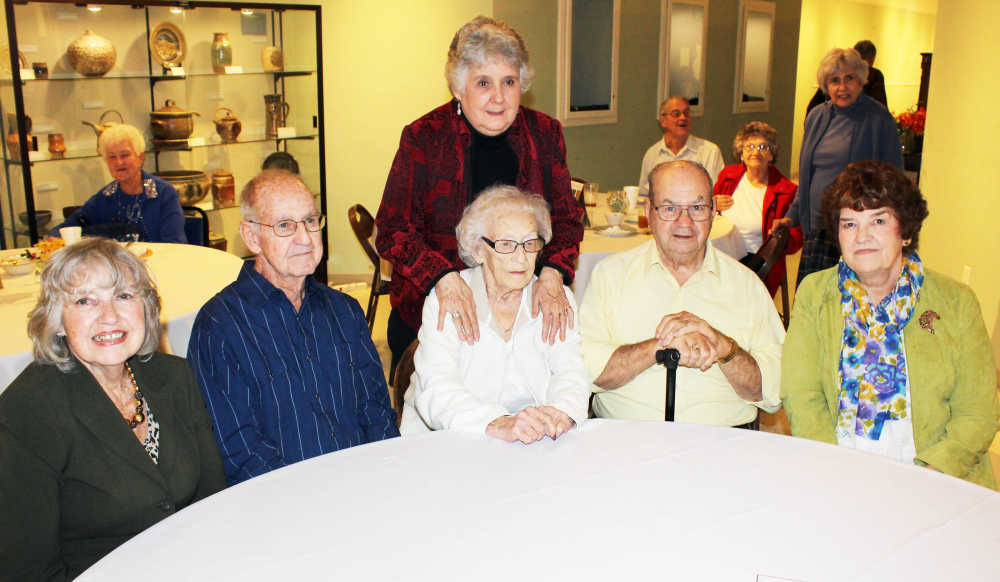 The aromas were certainly familiar. The tastes were mindful of yummy meals past. And many of the faces, they looked quite familiar too.

It was almost too much of a nostalgia and sensory overload for Susan Wilson Ross as a sold-out Sunday dinner at the Putnam County Museum celebrating the menu of the Old Trail Inn brought her back to her childhood days.

Ross is the only child of the late Marion and Virginia Wilson, who owned and operated the famed family-style restaurant at Putnamville from 1947-65.

“I can’t believe this all happened,” Ross said. “I’m so grateful. Because of this I got to see my family.”

That included cousins from Oregon, Chicago, Indianapolis and Auburn, who joined Putnam County fans of the restaurant for dinner and a chance to share stories about the food, the people and the place itself.

“The Old Trail Inn was my childhood,” Ross said, embarking on a story about the doughballs Louise Weist would sneak to her to enjoy as the cook made pies or her famous cinnamon or yeast rolls.

“We would throw them up (in the air) and try to catch them,” Ross began, “but one time I threw mine too hard and it stuck to the ceiling.

“And we forever had that little circle up there where it hit the ceiling.”

She knew she was in trouble.

That drew laughs from fellow diners as “I’ll be damned” was apparently a noted Marion Wilson catch phrase employed anytime anything went wrong or anything out of the ordinary materialized.

At that point, Putnam County Museum Executive Director Lisa Mock jumped into the conversation, telling Ross and her family that when the idea of having a Old Trail Inn Sunday dinner was initially put to her board, she was told, “You’ll be lucky to get 15 people.”

Now, after four sold-out dinners and more to come, including a Jan. 28 date for which reservations will soon be taken, Mock could only respond appropriately to the situation.

Johnny Wilson, a cousin of Ross visiting from Auburn, remembered how he would stay overnight at the inn with his dad (Marion Wilson’s brother) and that had its own rewards.

“When we stayed out there, he (Marion) would ask if we wanted a bedtime snack,” Wilson said.

“Well, as a bedtime snack, Uncle Marion would pull out a tray of sweet rolls and warm them up, and I’ll tell you, it’s a great way to go to bed.”

Back in its heyday, the Old Trail Inn often served 300 guests on a Sunday with after-church and evening seatings in a dining room seated 100 with an additional 25 or more spots available out on the porch when the weather cooperated.

On one Sunday, Marion Wilson claimed to have served 981 meals at the Putnamville hotspot.

After all, the Old Trail Inn had earned the Duncan Hines’ seal of approval back in 1950. It was featured in the Duncan Hines Guide as one of the top 100 places in the country to eat with its legendary fried chicken, swiss steak, mashed potatoes, sweet rolls and other goodies served family style.

The folks at Myers’ Market have been making the food for the museum dinners by replicating those storied recipes, but one old standby has been missing.

“If I don’t get a lemon pie recipe, I think Malcolm (Romine) is going to be very, very unhappy,” museum director Mock said of the dessert favorite.

Romine and the museum are hoping to put together a book on the Old Trail Inn, complete with the classic recipes, Mock explained.

It was Romine whose suggestion for a museum display on the Old Trail Inn grew into the successful dinners when Maxine Williams waltzed in with a batch of recipes she’d held onto all these years.

“People came by with wonderful memories,” Mock said, “but artifacts were few and far between.”

The Old Trail Inn building along old U.S. 40 (just off present-day U.S. 40) was reportedly built in 1831 as a stagecoach stop with four rooms. Over the years came multiple additions, and after 1920 it morphed into the Grant Hotel, which later picked up a bad reputation for alleged gambling activities.

After the Grant was raided and closed, Wilson purchased the abandoned site in 1947 and a Putnam County legend was born.

The Old Trail Inn was closed by the Wilsons in December 1965 and the building was destroyed by a 1973 fire.

But even that can’t diminish the memories for many folks, especially Ross.

“Those were fun times,” she said, regaling the diners with one last story.

“I remember we had a double wedding there,” she said, “and the poor minister got so confused. Daddy said when it was over, ‘I thought he was going to marry me to one of them.’”