Amid increased activity, it’s not too late to get a flu shot 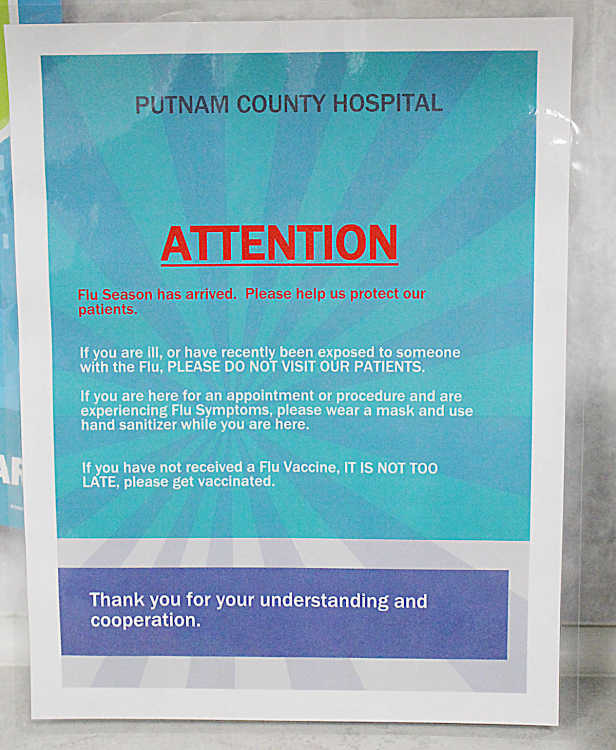 The Putnam County Health Department, along with the Indiana State Department of Health, is urging residents to take precautions against influenza amid recent increases in flu-like illnesses and deaths.

Locally, the Putnam County Health Department wants to let the public know that it is not too late to receive a flu vaccine.

“We have plenty of flu shots if anyone wants to be vaccinated,” public health nurse Sara Burnett said.

Burnett added that the strain of flu this year is hard on all segments of the population.

“Flu this year is indiscriminate,” nurse Burnett reported “It is hard on all ages, but especially children, the older population and those who are immunocompromised or have comorbidities.”

It is apparently a statewide trend.

“Unfortunately, as in years past, we are seeing increasing flu activity and the heartbreaking consequences it can have,” Indiana State Health Commissioner Dr. Kris Box said. “I urge Hoosiers who haven’t received a flu shot yet to do so. It’s the best way to prevent this serious illness or decrease its severity.”

Increased flu activity has been reported across the state, including at several long-term care facilities. Elderly residents, especially those with other health conditions, can be especially vulnerable during flu season, as can pregnant women, young children, people with chronic illnesses and individuals whose immune systems are compromised.

While no extreme action has been taken, Putnam County Hospital has taken the step of posting warnings at each of its entrances asking that those who are ill or have recently been exposed to someone with the flu not visit patients.

Anyone with flu symptoms visiting the hospital is

asked to wear a mask and use hand sanitizer.

Influenza is a viral infection of the respiratory tract and is spread by droplets released when infected people cough or sneeze nearby or when people touch surfaces or objects contaminated with those infectious respiratory droplets. People can also become infected by touching surfaces or objects contaminated with influenza viruses and then touching their eyes, mouth or nose. Common symptoms include a fever of 100 degrees Fahrenheit, headache, fatigue, cough, muscle aches, sore throat and runny or stuffy nose.

Individuals who are experiencing flu-like symptoms are urged to contact their physician or visit an urgent care facility to keep emergency rooms available for people who are critically ill. Patients whose symptoms began within 48 hours are encouraged to ask their provider whether Tamiflu, an antiviral medication, is appropriate.

The Centers for Disease Control and Prevention (CDC) recommends that everyone age 6 months and older get a flu vaccine each year. Hoosiers can help prevent the spread of flu by practicing the “Three Cs” of infection prevention:

Cover: Cover your cough and sneeze into your arm or a disposable tissue.

Contain: Stay home when you are sick to keep your germs from spreading.