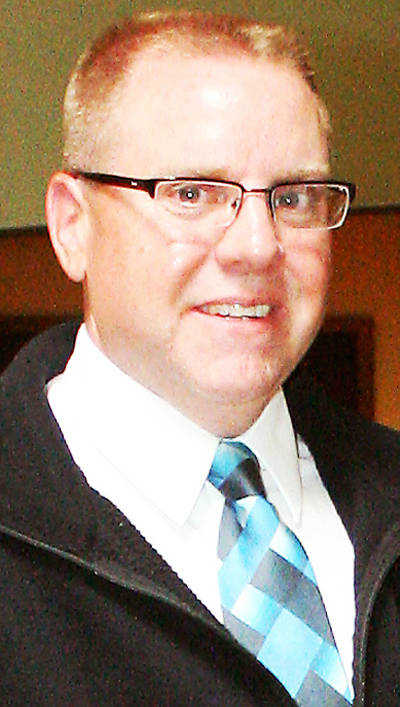 Greencastle’s police and fire chiefs were all about saving lives Tuesday as they met the public for the fourth edition of the Community Conversation series sponsored by the Greencastle League of Women Voters.

Both men were immersed in it Tuesday.

Police Chief Tom Sutherlin addressed a Main Street Greencastle gathering earlier in the day, talking about the most recent active shooter occurrence in Florida and its impact on this and other communities. And Fire Chief John Burgess was about 30 minutes late to the evening program because Greencastle firefighters responded to a house fire in which the homeowner had to be rescued after going back inside the burning residence in an effort to retrieve her dogs. 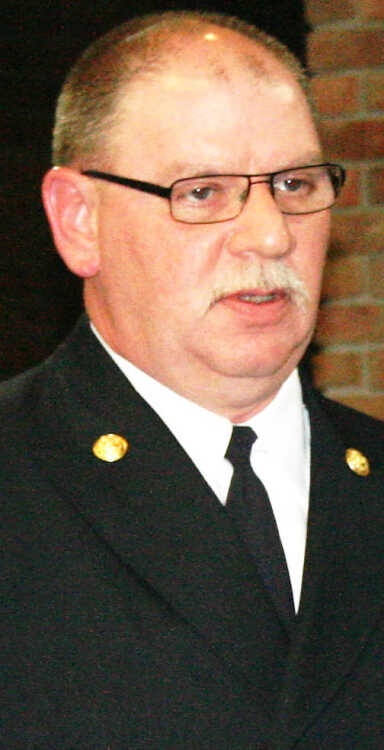 Tuesday night, Chief Sutherlin’s focus was on where the community drug scene stands, while Chief Burgess expounded on equipment and training needs to help keep the community safe.

Drugs were the common thread among many of Sutherlin’s remarks and the questions asked of the veteran of nearly 28 years on the city police force.

“We all know we have a drug problem in our community,” he began. “Everybody’s shaking their head ‘yes.’

“They were arresting people for drugs before I started,” Sutherlin said, “and they’ll be arresting them when I’m gone.”

Methamphetamine and marijuana remain the most prevalent drug choices locally, he said.

“To this date we still have not made our first heroin arrest,” he told the group of approximately 30 on hand at City Hall.

Prescription drug misuse is on the rise, Sutherlin said, but still is not as frequent as marijuana or methamphetamine use.

And to help quell that misuse, Greencastle City Police twice a year participate in Drug Take-Back Day, collecting nearly 4,000 pounds of medications in seven years, the chief reported. Another 1,000 pounds has been collected via the CVS drop-off box at the City Police station on North Jackson Street.

Asked about the biggest dangers in the community, Sutherlin suggested the prevalence of petty theft from cars, homes and even shoplifting, a lot of which, he said, can be related to drug issues.

“People are stealing, our local druggies (committing) petty theft, finding cash and things they can steal and turn into cash,” he said, indicating that cash is most often then used to buy drugs.

Chief Sutherlin, who has served with three mayors (Nancy Michael, Sue Murray and Bill Dory) over more than 14 years since being elevated to the role by Mayor Michael in 2004, said the department continues to work with Greencastle Schools when necessary. He noted that GHS Principal Russ Hesler will let him know when there is a need for the drug dog to make its presence known in the halls or the parking lot, and GPD will comply.

What we do know is that the Greencastle Fire Department provides fire safety to the DePauw campus as well as the community.

Chief Burgess was asked by DePauw student Jack Blanchard about malicious false alarms, recalling that when he lived in the freshman dorm students “thought it was funny” to pull the alarm.

That had indeed been a problem, Chief Burgess said, but this summer the university installed cameras to monitor such foolishness and the result has been only one pulled alarm so far this school year.

However, other false alarms still persist, and those may occur, Burgess said, because of old detectors, dirty units, smoke pulled in from the outside, cooking, hairspray and more. And many of those do occur on campus.

Of the 1,096 total runs by the Greencastle Fire Department during 2017, there were 352 false alarms.

Burgess, however, said he considers that a relatively small number and said he would “sooner have the system working and find nothing.”

Training is invaluable, the fire chief said, relating that GFD practices “all the time getting into our gear and out the door within two minutes.”

Burgess, who has been chief since 2016 with the retirement of Bill Newgent, told the audience the fire department is nearing the end of service on two of its vehicles -- the 1986 aerial ladder truck purchased through a major community effort following the tragic Opera House fire on the west side of the courthouse square and a 1996 Pierce pumper truck.

“We ran her quite a bit over the years and ran her hard and she needs to be replaced,” Burgess said of the pumper truck, which he said would likely take more than $550,000 to replace.

The aerial truck, which was such a vital tool in battling the April 2002 Rector Hall fire on DePauw’s campus, is more than 30 years old, Burgess noted, and “typically new a bare-bones model would cost a million and a half.”

Replacement of both trucks has been in the city’s long-range planning consideration.

Police Chief Sutherlin closed the evening’s community conversation by noting he knew active shooter discussion “would be a hot topic ... and it should be.” (His Main Street Greencastle discussion of the active shooter issue earlier in the day was carried in Wednesday’s Banner Graphic and is posted online at bannergraphic.com).

Sutherlin said a tabletop exercise was conducted last year at Greencastle Middle School and a full-scale active shooter exercise is being planned for 2019 involving the countywide team.

The next scheduled Community Conversation is scheduled for Tuesday, March 13 at 6:30 p.m. at City Hall and will feature Mayor Bill Dory responding to the public.