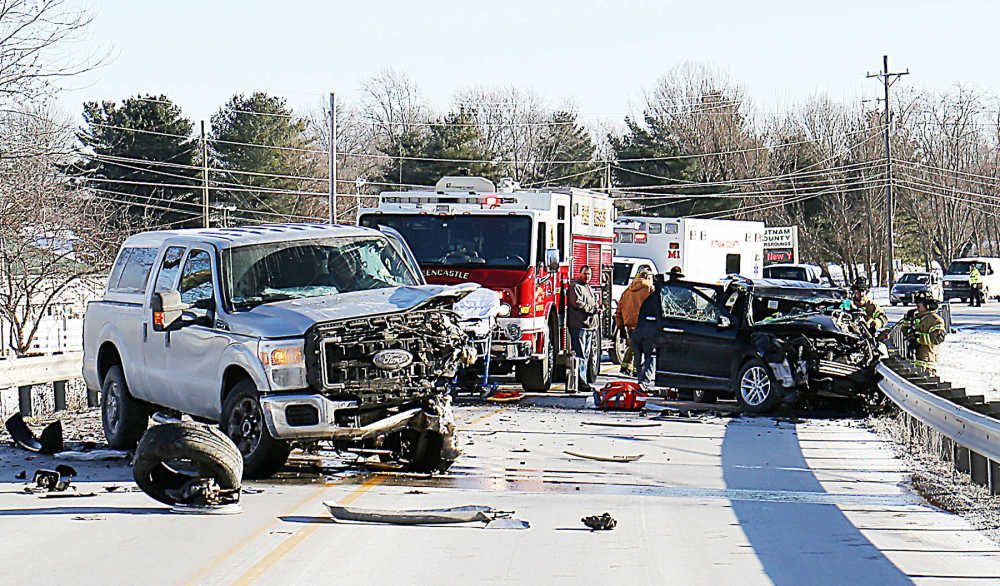 Scene of the Dec. 27 accident near the entrance to the Putnam County Fairgrounds on U.S. 231 north of Greencastle that sent three people to the hospital and led to four criminal charges being filed this week against the driver of the Ford Explorer (at right) Brandy Lynn Birge, 34, Greencastle.
File photo

A 34-year-old Greencastle woman whose vehicle crossed the center line near the base of Water Works Hill on U.S. 231 north of Greencastle, resulting in a Dec. 27 accident that sent all three persons involved to the hospital, is facing four charges as a result of the collision.

Brandy Lynn Birge was arrested on a warrant Friday and was released from the Putnam County Jail on $2,500 bond in the Putnam Circuit Court case in which she has been charged with:

-- Causing serious bodily injury when operating a vehicle with a Schedule I or II substance in the body, a Level 6 felony (punishable by 6-30 months incarceration).

-- Causing serious bodily injury when operating a motor vehicle with an alcohol concentration equivalent (ACE) of .08 percent or more, a Level 6 felony.

-- Operating a motor vehicle with an ACE of .15 percent or more, a Class A misdemeanor (punishable by up to a year in jail).

-- Operating a vehicle while intoxicated endangering a person, a Class A misdemeanor.

According to the probable cause affidavit, toxicology results from St. Vincent Hospital, Indianapolis, indicated that Birge had cannabinoids and a high level of alcohol in her body at the time of the 3:13 p.m. accident near the entrance to the Putnam County Fairgrounds.

“Mrs. Birge, as a result of her high level of intoxication, was unable to maintain her vehicle in the correct lane,” Deputy Scott Ducker of the Putnam County Sheriff’s Department noted in his supplemental Feb. 18 report. “Witnesses observed Mrs. Birge cross the center line on multiple occasions. Mrs. Birge eventually crossed the center line, striking another vehicle head-on. The crash resulted in serious bodily injury to all persons involved.”

When her Ford Explorer driven southbound drifted into the northbound lane, it crossed into the path of a Ford F-series Super Duty driven northbound by Dennis Nemeth of Rockville.

Heavy impact to the left front of Nemeth’s truck, spun Birge’s SUV back into the southbound lane, where it came to rest against the guardrail.

Investigation at the scene produced an empty bottle of Fireball brand alcohol with the cap on in the front passenger floorboard of the Birge vehicle.

Birge, who was unconscious, was not successfully extricated until nearly an hour after the accident. She was flown to St. Vincent Hospital, Indianapolis, by Stat Flight helicopter.

The Nemeths both suffered broken ribs, while she sustained broken vertebrae.

In January, Ducker visited the Nemeths at their Parke County residence and checked on how they had been doing since the accident.

“Mr. Nemeth appeared to be able to walk around fine,” the deputy added, “however, he stated that his wife was in a brace and was having much more difficulty moving around.”

Birge’s case will go before Putnam Circuit Court Judge Matthew Headley. No court date had been set in the matter as of Friday.