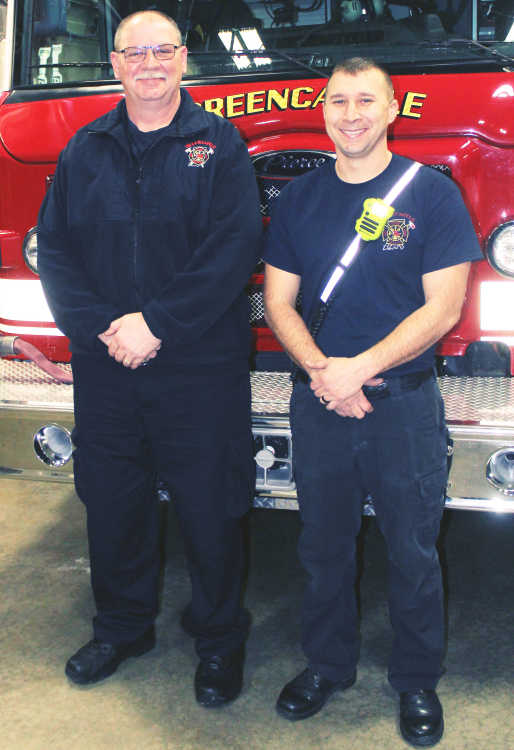 For the first time in more than two years, the City of Greencastle has an assistant fire chief on board.

Rob Frank was elevated to the role from the captain’s ranks when the Board of Works and Safety made it official earlier this week.

Frank becomes the Greencastle Fire Department’s first No. 2 man since Burgess was made chief by Mayor Dory upon the retirement of Bill Newgent on Jan. 12, 2016. Burgess had been assistant chief under Newgent since March of 2014 when he succeeded the retiring Jeff Mace.

Frank knows those are big shoes to fill but said he enjoys the leadership role that his previous positions as lieutenant and captain have already afforded him over his six years as a firefighter with the department. Before signing on fulltime in 2012, he had served as a reserve firefighter since 2008.

“It’s something I enjoy doing,” Frank said of the leadership role, suggesting assistant chief is the logical “next role for me.”

“I’m excited,” Chief Burgess said of the selection of Frank. “We’ve had a few talks already. I’m ready to put him to work.”

Ditto for Frank, who lives in Greencastle with wife Dessa (the Tzouanakis School art instructor) and their two children.

“I look forward to the challenge of the new position,” he said. “I feel pretty confident in my leadership abilities. I look forward to helping move the Greencastle Fire Department forward into the future.”

Chief Burgess had used nearly those exact words in expressing what Frank would bring to department leadership.

“I think Rob will be a good help to me in this department,” Burgess said, “and help us move forward into the future.”

Told that was what Frank had said, Burgess laughed.