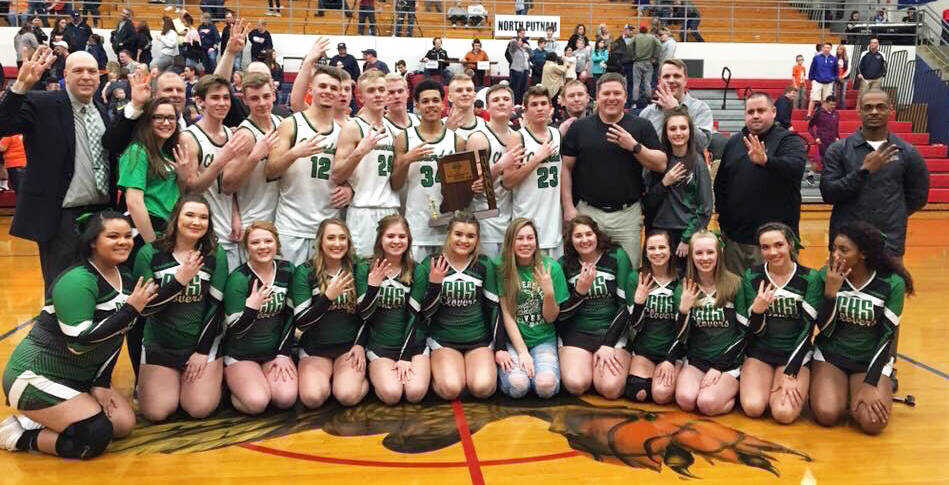 The Cloverdale Clovers added to their legacy by winning their fourth straight Class 2A Sectional 44 title on Saturday night.

The Clovers used an explosive 33-point second quarter to cruise to a 63-38 victory over the North Putnam Cougars, earning them a trip to Greenfield Central next Saturday in the regional.

Cloverdale hit 12-of-27 from behind the arc and pressured the Cougars all over the court to improve to 20-6 on the season North finished its season at 10-16.

North was the aggressor to open the game. James Duncan led off the game with a trey and Treyton Smith added a layup to take a 5-0 lead. Jake Wilkes hit a three to get the Clovers on the board, but North went on a 10-4 run highlighted by a Caleb Duncan three and led 15-7 with 2:44 left in the first quarter. Cloverdale was able to close within two at 17-15 at the end of the quarter. North shot 7-of-9 from the field and held the Clovers to 5-of-19 shooting.

“We came out strong and it was nice to get going like that, but they hit a couple of shots to get back into it,” North Putnam head coach Collin McCartt said.

Cloverdale opened the second quarter with a 14-2 run. Freshman Nolan Kelley hit three from deep and Wilkes added one from long range during the run. Cloverdale overall hit eight three-pointers in the period as Moore had 16 of his game-high 33 during the offensive onslaught. Cloverdale outscored the Cougars 33-8 in the quarter and led 48-25 at the intermission.

“We kind of panicked a little bit. We had some turnovers and they got rolling,” McCartt said.

Kelley had 12 first half points on 4-of-5 from three-point range to spark the Clovers.

“Nolan had a really good game. He is a great shooter and he works so hard. He is constantly working on his game. He is what Indiana basketball is all about,” Rady said.

The Clover defense was almost as impressive as its offense, forcing North into seven turnovers in the period and 14 in the first half.

“It all starts on the defensive end. We really wanted to pressure the ball. The Smith kid drives the ball so well, we went under screens and wanted him to shoot [jump shots], while we wanted to pressure everywhere else,” Rady said.

Cloverdale would need that defense in the third quarter. The Clovers cooled off early in the second half. They wouldn’t score until Wilkes hit a trey with 2:24 left in the third quarter. North had cut into the lead by scoring the first eight points of the period and trailed 48-33, but the Clover defense clamped down and held them scoreless over the last 3:41 over the period. Cloverdale then scored the last 10 points of the quarter with Moore scoring seven of them.

“They made a little run at us in the second half, but we kept our defensive intensity. North has come back from big deficits before. We kept telling the kids that and it worried us,” Rady said.

The Clovers led 58-33 heading into the final stanza, and a lot of that had to do with the Clovers being prepared for what North would try and do.

“We have some great assistants here. Coach Chrisman had the scouting against Monrovia, Coach Varnes had it against South Putnam. Coach Turk had it tonight, Coach Gerard would have had it if it was Covenant Christian. Then coach Thomas works with our conditioning and gets the kids ready. We have had some former players, Michael Osborne and Jason Wilson, who have been able to help us out,” Rady said.

Cloverdale was content to run out the clock in the final period. The Cougars were able to cut into the lead as they won the fourth period, 15-5, but it was too little, too late as the Clovers finished the game out by running the clock out as both squads emptied their bench.

Cloverdale’s Moore led all scorers with 33 points and moved up to 13th in the state’s career scoring list and is just 17 points shy of taking over 12th.

“Jalen is really making great reads. It has been phenomenal to watch his growth over the last four years. Jalen leads by example. He has played big for us,” Rady said.

Jake Wilkes had 18 points and a game-high 14 rebounds.

Elliot Gross led the way for North with 14 points, while Andrew Pickel had 12.

“I am really proud of the way our kids overcame adversity all year. We had a lot of injuries and kids really stepped up and took on different roles,” McCartt said.

The Clovers will play Shenandoah next Saturday at Greenfield-Central.

“Sectionals are hard to win. We have gotten four in a row, but this is hard to do and this team has had a bulls-eye on its back,” Rady said.