A 71-year-old Greencastle woman owes her life to the quick actions of two local emergency responders, and Thursday night, the City of Greencastle honored the men for their heroism.

Greencastle Fire Department Lt. Brock Beebe and Greencastle Police Officer Kyle Lee were honored during a ceremony at the outset of the March City Council session at City Hall. It was the quick actions and bravery of Beebe and Lee that rescued homeowner Marie Tippin, who had gone back into her burning residence at 20 Frazier St. to try and save her animals. 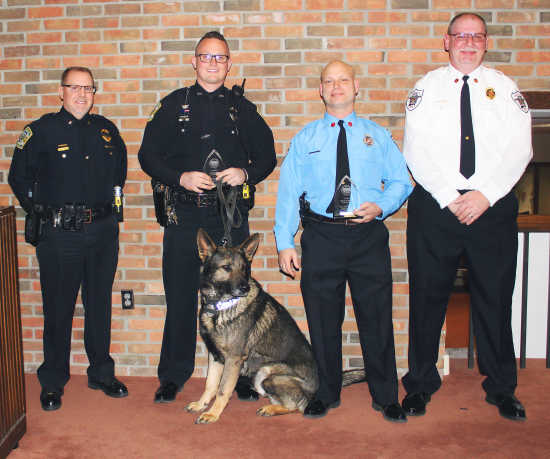 "Marie Tippin re-entered her burning home in an attempt to save her three dogs that had not gotten out with her and her family," Fire Chief John Burgess told the Council in recounting the incident.

"Seconds after entering her burning home, Mrs. Tippin was overcome with smoke. She was able to make it to a window, and that is when the quick response of (Beebe and Lee) saved her life."

The two emergency responders spotted the woman in distress at the window and worked quickly, grabbing her through the window and pulling Tippin to safety.

She later told reporters, one of them "grabbed me with one arm and pulled me forward to grab the other arm." When she was pulled through the window, Tippin was admonished with, "You can't, you can't go back in."

GFD Fire Inspector Kenny Shepherd has said the house fire "was believed to be caused by a power strip into that had been plugged into a freezer. It was the only thing right there where the fire started that could have done it."

Saying she was lucky to be alive after the incident, a grateful Tippin noted that her home "can be replaced, but my animals couldn't."

Greencastle firefighters were able to find and rescue the woman's dogs, including a pitbull that one fire official said "wasn't very happy" about their presence.

Thursday night the attention turned to Lt. Beebe and Officer Lee, neither of whom made any comment during the ceremony.

"Today we are here to recognize both Lt. Brock Beebe and K9 Officer Kyle Lee for going above and beyond the call of duty," Fire Chief Burgess said, "working quickly and together to make sure Marie Tippin was pulled to safety. Without their quick response, Mrs. Tippin could have been seriously hurt or even fatally injured in this fire," Burgess concluded.

"It was a great relief on the evening of Feb. 20, 2018 that all emergency services personnel got to go home," he said, "and they were able to save Mrs. Tippin and all her family got out that night."

That is not always the case when it comes to being a police officer, Sutherlin suggested.

"However, it saddens me to says that our 'Family of Blue' in the Boone County Sheriff's Department is making preparations to lay to rest one of their own," he continued, asking for a moment of silence in honor of Boone County Deputy Jacob Pickett, who was fatally wounded in a March 2 police pursuit of a suspect.

"If you've seen any of the news lately, the gentleman -- and I hesitate to call him a gentleman -- but the person who took the life of Deputy Pickett told the news cameras he has no remorse for what he did," Sutherlin said.

Following the moment of silence, Chief Sutherlin brought the subject back to the two local responders.

Moments later it was back to reality for city emergency services personnel as central dispatch toned out the fire department on a run and the numerous firefighters and police officers who had come to City Hall to witness the ceremony scattered to respond in a swirl of sirens to what was later determined as multiple medical runs.