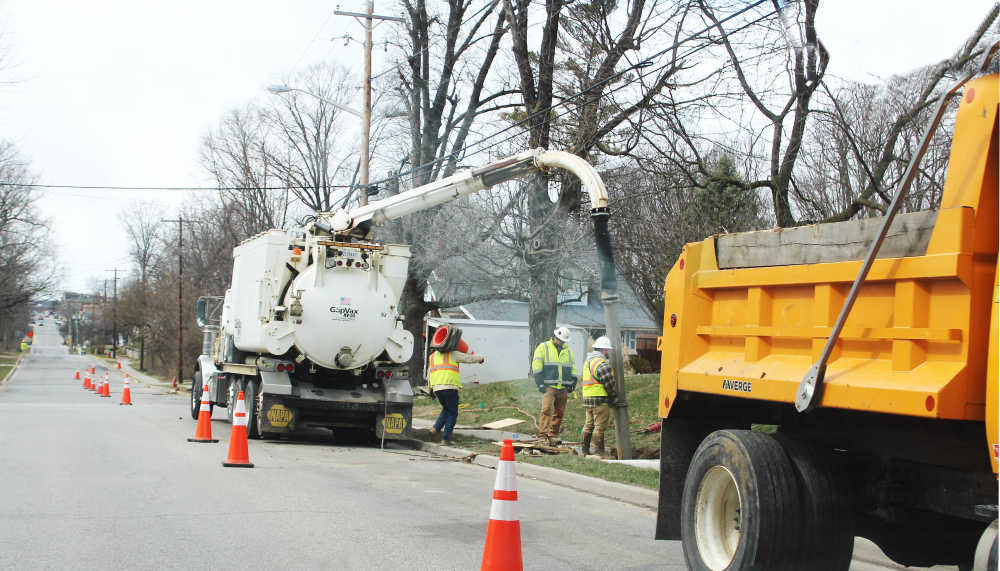 Workers from Miller Pipeline, a subsidiary of Vectren, work along the north side of Franklin Street between Northwood Boulevard and Arlington Street Tuesday afternoon, replacing a gas main as part of a project that will involve 1.28 miles of pipeline being retired and 34 services replaced locally.
Banner Graphic/Eric Bernsee
Order this photo

It may be a little too early for asphalt work and road resurfacing in Indiana, but that hasn’t kept Vectren Energy from getting a headstart on pipeline projects along city streets.

Contract crews working for Vectren are replacing gas mains and service lines in Greencastle as part of the company’s pipeline replacement program, which is a multi-year effort to replace steel and cast-iron pipeline infrastructure throughout Indiana.

In chilly temperatures and blustery winds Tuesday, crews were working along Franklin Street, replacing a gas main between Arlington Street and Northwood Boulevard. It is one of four areas of the city that are part of the gasline replacement project, Mayor Bill Dory told the Banner Graphic.

According to Vectren’s website, 1.28 miles of pipeline will be retired and 34 services replaced in Greencastle.

The Greencastle work began last week at Robe-Ann Park where the directional boring followed the route of the gasline from near the DAR cabin at the Bloomington Street entrance, along the interior roadway, over toward the Emerald Palace and out to Anderson Street.

While the park project alone was expected to take a couple of weeks, it appears most of the work there is done, thanks in part to there being no traffic to contend with at that location.

Meanwhile, work along Franklin Street has required flagmen at both ends of the work zone with traffic restricted to one lane and intersections at both Arlington Street and Northwood Boulevard being closed at times.

The mayor said Vectren has not provided a timetable on the project, nor has it shared information on which location will be next after the Franklin Street work is complete.

Vectren is in the middle of a seven-year plan to replace nearly 2,000 miles of old pipeline with modern plastic pipeline across its Indiana and Ohio service territory.

In most cases, a polyethylene (plastic) system is being installed to replace the current bare steel and cast-iron gas pipeline system. First, the gas main is replaced within the right-of-way, and then the service lines running directly to homes and businesses are replaced. Upon completion of the project, affected yards, sidewalks and streets will be restored.

“To ensure the continued reliability of our natural gas pipeline systems and service, our program to replace essentially all of our bare steel and cast-iron pipeline infrastructure carries on,” a gas company spokesman said. “As we continue to modernize our pipeline infrastructure, we remain focused on strengthening our system to not only meet federal requirements, but ensure the safe delivery of natural gas service to our customers for decades to come.”

Vectren said the pipeline projects may take several weeks to complete, and times may vary based on the size of the project, weather, ground surface/soil and other situations that may arise.