District 4 congressional candidate Jim Baird (R-Greencastle) Friday condemned a disrespectful attack on his campaign for the U.S. Congress mailing by an out-of-state Super PAC. And he wasn't alone.

The Super PAC mailer, which carries a disclaimer that it was paid for by a group known as Citizens for a Strong America, shows a gas station sign with the words suggesting gasoline costs an "ARM" and "LEG." 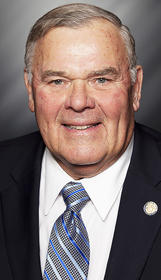 "This kind of negativism is a prime example of why good people do not run for political office," Baird said in a prepared statement released to the Banner Graphic. "Unfortunately, our country and our children suffer the consequences of not having the expertise of talented citizens.

"Disrespecting our wounded combat veterans crosses a line that Hoosiers will not tolerate," added Baird, a U.S. Army veteran of Vietnam. "My fellow veterans put it all on the line to preserve and defend our way of life and their sacrifice should not be used as political fodder. 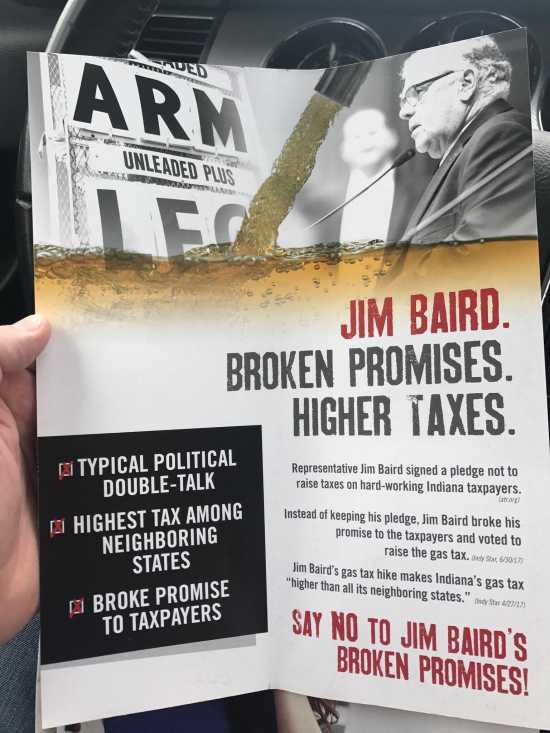 Mailer at center of controversy.

Baird, who lost his left arm in combat while serving our country in the Vietnam War, was awarded a Bronze Star with V device and a Purple Heart with an Oak Leaf Cluster.

"The people in the 4th District have had enough of this secret out-of-state money attacking our values, our veterans and trying to elect candidates like Steve Braun and Diego Morales, who do not even live in the district," he said. "We need a congressman who lives here and will listen to Hoosiers while in Washington, not secret out-of-state mega donors."

Morales' campaign, however, wants to set that straight. He does live in the district, residing in Plainfield, it was noted in response to Baird's statement.

Baird wasn't the only person condemning the ad Friday. Political commentator Abdul-Hakim Shabazz of Indianapolis posted the mailer and his response to it on Twitter.

"I understand negative mailers," said Shabazz, who locals might recall as the 2017 Putnam County Lincoln Day Dinner speaker, "but sending out one saying the gas tax will costs Hoosiers an arm and a leg against a lawmaker who lost his arm in Vietnam might not be one of the brightest political moves."

District 4 opponent Steve Braun was quick to denounce the political mailer as well.

"I strongly condemn the mailing and I'm frankly disgusted by it," Braun said in a statement provided to the Banner Graphic. "These Super PACs have no respect for any of us running. I have been targeted by one called With Honor Fund and they've spent $365,000 personally attacking me, the highest amount against any candidate in this race.

"The system is so broken that I found out the same direct mail company they were using against me had been working for my campaign," Braun added. "This is the latest and most blatant example of how these Super PACs come out of nowhere and throw mud."

"It is disgusting and morally reprehensible that these vicious predators would attack an honorable man who selflessly served his country with valor," Morales said. "To mock a man's wartime disability in order to try to win an election is shameless and, as a fellow veteran, beyond my comprehension."

After eight years, Baird chose not to seek re-election to the District 44 Indiana House seat, which represents all of Putnam County and parts of Clay, Parke, Morgan and Owen counties.