OK, so maybe the commencement advice wasn’t age-old as much as it was octogenarian-oriented Sunday at DePauw University.

Not only did the Class of 2018 and its friends and family hear from featured speaker Vernon E. Jordan Jr., the 82-year-old civil rights activist and presidential confidant, but also received some ageless wisdom from a trio of octogentarians awarded honorary degrees during the ceremony. 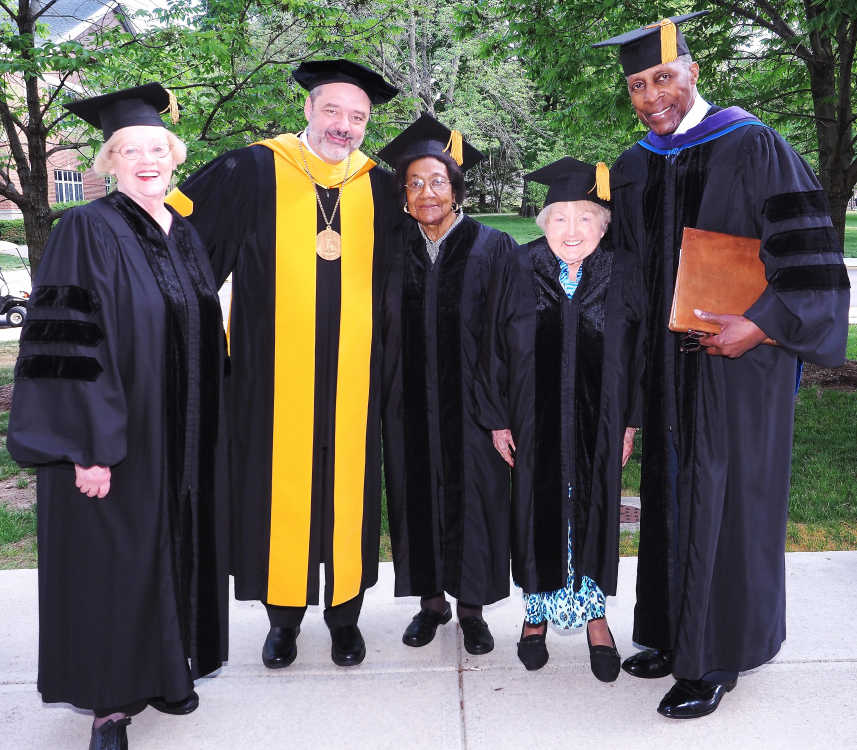 Being honored for her “abiding sense of history” among other succcesses in radio and business, Bingham advised, “This is not the DePauw I attended back in the last millennium; it is greatly improved, as is the community of Greencastle,” alluding to changes in both the university and her hometown.

She offered a bit of a history lesson for DePauw students who were not yet born when Greencastle reached a croossroads in 1986 with the announcement IBM Corp. was leaving the city. Bingham related the community effort that followed and how it resulted in Grencastle becoming an All-America City in 1991.

“We did it,” she suggested, choking up a bit at the thought. “And we’re still doing it.”

Bingham, a member of DePauw’s Class of 1956, advised the latest graduates, “I hope you have an opportunity to have a civic success ... This is your world, this is your day, this is your time to go and do. Remember this, it’s okay, it’s all right to get stardust on your new suit. Go do.”

Meanwhile, Brown who now serves as house director for Phi Kappa Psi fraternity -- which had 21 members in the graduating class of 473 on Sunday -- looked back on what her exemplary educational career has meant.

Brown has served DePauw for more than 30 years, coming to the university as an instructor of education in 1986 after serving as a principal in Warren Township Schools in Indianapolis and, before that, at Ridpath School. She holds the distinction of being the first African American to teach in Greencastle schools.

“I am grateful that my career provided a platform, thus opportunities to help others, especially the young people of Greencastle and students at DePauw,” Brown told the commencement crowd, adding that, “DePauw is a great place to live, work and learn.”

Brown then encouraged the Class of 2018 “to not let your learning end today, but let it be a stepping stone to being a lifelong learner.”

“I accept this degree with much pride and humility,” Brown added, “and I will allow it to serve as a testament to the value of serving one’s community and serving in a profession with commitment and compassion.”

Meanwhile, Holocaust survivor and forgivenes advocate Eva Kor told the class, “Forgiveness is an act of self healing, self liberation and self empowerment.”

One of the few surviving twins still sharing her personal account of medical experiments supervised by infamous Nazi doctor Josef Mengele at Auschwitz, Kor provided a touch of humor and irony.

She recalled nearly dying after one injection, hearing Dr. Mengele say it was “too bad” but she had only two weeks to live.

“My only memory of those two weeks,” Kor said, “was crawling on the bare floor (to reach water) and fading in and out of consciousness.”

In 1995 Kor chose to forgive the Nazis and opened CANDLES Holocaust Museum and Education Center in Terre Haute, with a mission to illuminate the world with hope, healing, respect and responsibility through education about the Holocaust.

Forgiving others is free, she told the graduates. “So, any of you graduates, if you ever get very angry with somebody, please try forgiveness.”

Looking back on her experience at the DePauw commencement, Kor later joked on social media, “It was 100 degrees. Now I can say that I survived Auschwitz and I survived the commencement exercises at DePauw University.”