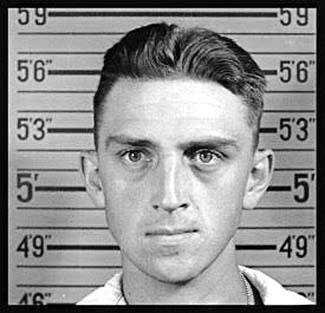 A 75-year mystery of World War II will be laid to rest this holiday weekend along with a Greencastle native killed in action almost two years before the Japanese surrender ended the war.

It's a mystery that even the surviving family of Thomas Jesse "Tommy" Murphy didn't know was a mystery until his remains turned up on a distant island when a homeowner was attempting to dig footers for a carport and dug up rusty dogtags of another American serviceman.

Fortunately he stopped the work and called authorities or this mystery wouldn't even be a mystery.

Turns out a parking lot had been laid atop an impromptu mass grave dug by battle-weary Marines in the hours after the bloody battle at Tarawa in November 1943.

Discovery of the dogtags of PFC Donald R. Tilson led to the unearthing of a previously unrecorded and unknown burial trench with at least 24 sets of remains, including those of Murphy, whose identity was confirmed through dental records and skeletal remains. To date, he is one of eight men whose remains have been positively identified.

"OK, we never spoke of Tommy because his death was so painful, I was told," Chantel Oliver shared with the Banner Graphic this week as she awaited Murphy's remains to be flown into the Cincinnati Airport Friday in advance of a Memorial Day Monday burial in Ohio. "So by the time I was born in 1956, his name came up maybe two or three times by our mother just in passing."

Chantel and her sister had always assumed their uncle was buried somewhere in Greencastle, not forgotten in a "lost cemetery" in the Pacific.

"So imagine my surprise, when going through my mother's things after her death in 2011, I see a tattered box with no lid in a dresser drawer," she said. "Inside was this precious Purple Heart (presented to Murphy's mother in September 1944) and ancient news clippings from 1940s. 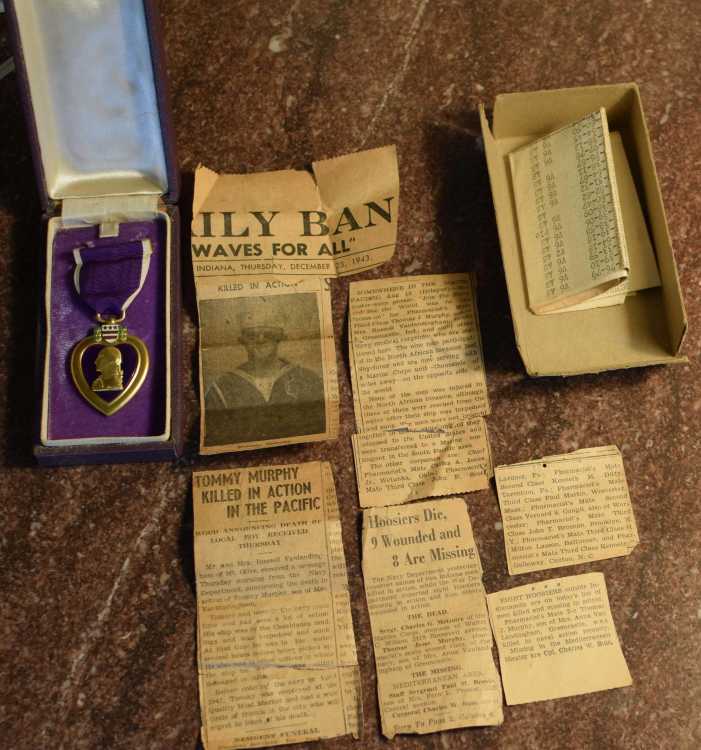 "None of us had a clue about this," she reiterated. "We had no idea, and no relatives to ask for details."

In one of the photos discovered in the dresser drawer, you can even see it says the location is "Somewhere in the South Pacific." It also mentions the invasion near Africa and Casablanca in which Murphy took part.

"My uncle was on a ship that was torpedoed and was in the water several hours before being rescued," Chantel Oliver continued. "He then was shipped to the Tarawa region where he died on Nov 20, 1943 on the first day of the invasion."

His niece admits all she knows about Tommy is very little, especially considering his death occurred 75 years ago.

By all accounts, Thomas Jesse "Tommy" Murphy was a typical young man, growing up in Greencastle in the 1930s and '40s.

His senior spotlight in the 1940 Greencastle High School Minaret yearbook said his nickname was "Irish Luck." He was listed as a member of the Ag Club, Conservation Club and the Bachelor Club.

He was the son of Jesse L. Murphy and Anna Oliver Murphy of Greencastle, but by then his mother had been remarried to a man named Russell Vanlandingham and Thomas was living with them in Greencastle when, records show, Murphy enlisted in the U.S. Navy Reserves in Indianapolis for four years on April 16, 1942 and was assigned the rank of apprentice seaman.

Murphy was called into active service on June 19, 1942 for six weeks basic training at Great Lakes (Ill.) Naval Station. By April 1943 he had been shipped out to American Samoa as a hospital apprentice first class before being transferred to Marine Replacement Battalion on July 14, 1943 and then on to New Zealand that August.

By October 1943 he was promoted to pharmacist mate third class (PhM3c) and assigned as a medical corpsman with the Marines and promoted to second class.

Less than six weeks later, PhM2c Murphy was dead, a casualty of fierce fighting during an ill-fated landing at Tarawa, an island in the Pacific and site of what was considered the bloodiest battle of the Pacific Theater.

Murphy went into the island invasion aboard the USS Monrovia. Unfortunately the invasion was taking place at high tide and the invaders were unaware of coral reefs below the waterline and the transport ships hung up on the reefs, unable to go forward, unable to back up.

"They were sitting ducks," his niece noted.

Japanese machine guns and mortars mowed down the Americans stuck in the landing transports, while others, carrying packs laden with heavy gear, jumped into water they thought they could wade through to shore and found themselves struggling in 10-15 feet of water that few survived.

The casualties were buried in mass graves but over time and the chaos of war, the exact spot was lost to history as island vegetation grew up quickly and many members of the burial detail were lost in battle themselves in other conflicts.

Murphy's nieces provided the Navy photo of him standing in front of the height chart, looking all "serious and full of purpose," it was noted.

"But the world still gets to finally see his young, handsome face," Chantel Oliver reasoned.

Thomas Jesse Murphy's​ remains will be flown into the Cincinnati airport at noon Friday and accompanied by the Patriot Guard to Hamilton, Ohio, in time for visitation that will be from 2-4 p.m. Sunday, May 27 at Zettler Funeral Home.

He will be buried on Memorial Day at 11 a.m., his remains interred next to his brother, Lester Oliver, formerly of Greencastle, along with his sister-in-law, Juanita (Ison) Oliver, also from Greencastle.

"It's just crazy emotional and wistful to have this now," Chantel Oliver said. "I wish my father was here to see this funeral."