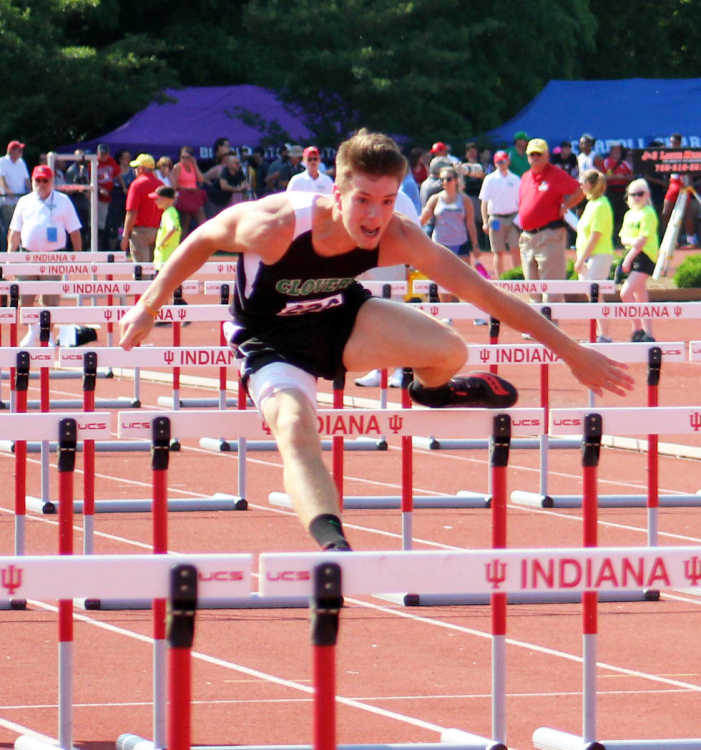 Cloverdale's Tyler Kaeff goes over a hurdle at the state finals on Saturday.
Banner Graphic/JOEY BENNETT

BLOOMINGTON — Cloverdale’s Tyler Kaeff ran up against a tough and fast field on Saturday in the 110-meter high hurdles at the IHSAA state finals.

Kaeff finished the preliminary heats with a time of 14.87, missing a spot in the finals by nine places and just .37 of a second.

“We are extremely proud of Tyler,” Cloverdale coach Andy Tyler said. “He worked hard and continued to improve all year. Even with his injury at the sectional, he never made any excuses. He would show up, we would wrap him up and we would get to work.”

Tyler noted that Kaeff’s attitude was one of many outstanding qualities he has.

“Tyler had a positive attitude every step of the way,” coach Tyler said. “He is the kind of kid you want representing your program.”

Recent Cloverdale graduate Jalen Moore made his college choice official on Saturday, and will play basketball at Olney Central College in Illinois.

Moore was the second-leading scorer in the state as a junior and led the state in scoring this year, as he finished 11th on the Indiana boys’ basketball career scoring list.

The Knights averaged 87.8 points per game and lose three guards from this year’s team.

Greencastle’s No. 1 doubles team of Nicole Newgent and Molly Ramey competed in the IHSAA individual doubles tourney at Kokomo on Saturday.

The LCC team went on to defeat a team from Fort Wayne South 6-0, 6-0 to advance to the state finals.

Greencastle coach Annette Munoz was very impressed with the drive and focus of Newgent and Ramey as athletes, and with their overall improvement throughout their season.

“Nicole Newgent was a great leader for the doubles team,” Munoz said. “Molly Ramey worked hard to develop her skills and was willing to take guidance from Nicole.

“I believe this was a key component for their success as a doubles team,” she added. “It was hard to see it end, but I am so proud of the season they had.”

Newgent and Ramey finished the season 16-5, with Newgent winning an individual doubles sectional title for the second straight year.

“Thank you to the graduating seniors [Nicole Newgent, Corinne Buchanan and Hannah Miller] for their commitment to the team,” Munoz said. “You will all be missed. I feel blessed to be able to coach at Greencastle and I look forward to seeing what the team can accomplish in future years.

At the Foxcliff Golf Course near Martinsville, Cloverdale competed in the Martinsville boys’ golf sectional on Monday and finished 10th.

Drew Boyette led the Clovers with an 89, while Wyatt Helterbrand and Michael Holsapple each shot a 107, Jason Miller had a 114 and Cody Morris added a 124.

“The high scores are a good indication of the difficulty of the course,” Clover coach Doug Wokoun said. “There were a number of talented young men in our sectional, but the course got the better of many of them. I don’t recall over the last 15 years seeing scores like we had this year. The weather and conditions were perfect, but the level of competition seemed to be a strong influence on all the players in a negative way.”

Wokoun thought Boyette had one bad hole on the first nine, and had some scoring opportunities get away from him.

“He battled on the second nine, but he was trying to make some things happen, and it worked against him,” Wokoun said. “He has been a very good player for us, and I hated to see him finish this way. To his credit, he fought as best he could, and represented us very well.

“Wyatt and Michael had rounds that were much like the rest of their seasons,” Wokoun added. “Both did some very good things, but also had some issues with misfired shots and hazard areas on the course. They are competitors and gave us all they had. They both have positives to build on for next season, but their offseason work will determine how far they progress.”

Miller and Morris both had their struggles on Monday, Wokoun said.

“Jason had one of those days when nothing seems to work,” Wokoun said. “He didn’t get a good start, although he had a couple of decent holes on his first nine. His second nine started well, but he ran into some issues that he just couldn’t overcome. I wish his last round as a high school player could have been different, but golf can be a very difficult endeavor, and it got the best of him in this round.

“Cody was getting his first tournament experience, and had some moments that were promising,” Wokoun added. “He has battled consistency all spring, and it continues to be his biggest obstacle to success. He has some very good potential, and his offseason will also be key to his next season.”

The Clovers finished the season at 10-10.

“While we have completed our season, we are still hopeful that the Tiger Cubs and Tyler Hicks will represent Putnam County golf well this week in the regional at County Oaks,” Wokoun said.