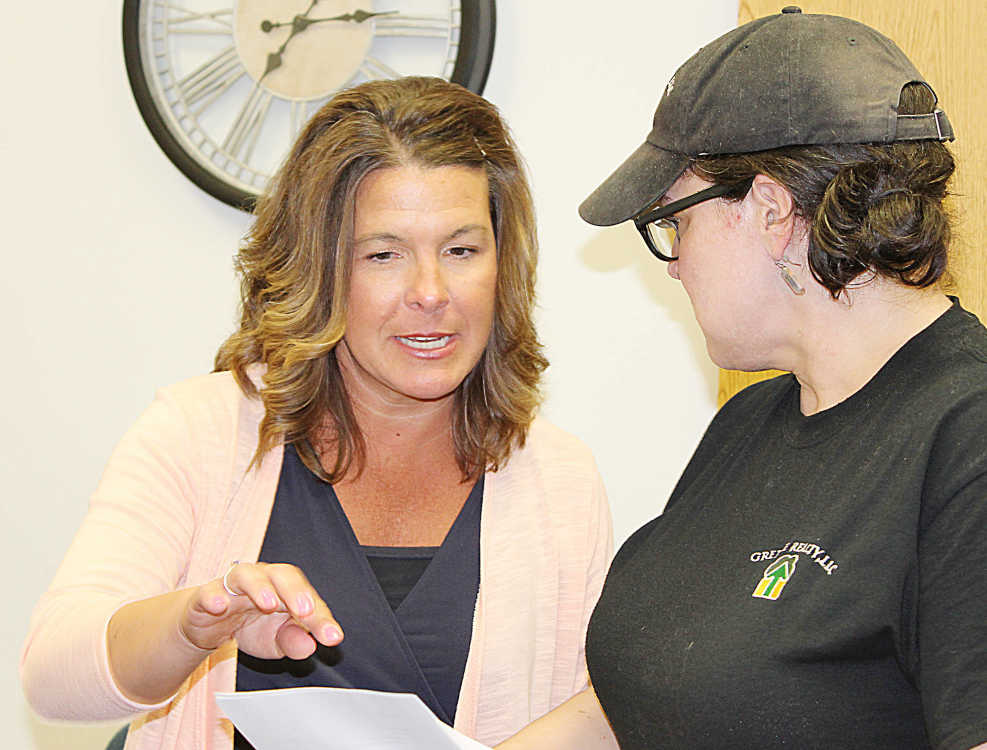 BAINBRIDGE — Coming from a school that wears a lighter shade of blue and white, new North Putnam Superintendent Nicole Singer may need to update her wardrobe to match the Cougars’ navy and orange.

For her introduction on Monday night, the current superintendent of Hamilton Community Schools in northeast Indiana improvised, wearing navy and peach.

Regardless of the colors, Singer was welcomed by board members, administrators, teachers and parents during a special board meeting that lasted about five minutes.

With board president Ron Spencer out of town on previously-scheduled business, vice president John Hays welcomed everyone to the meeting before pointing out Singer among the audience members and bringing her contract up for a vote.

“After the last two or three months of looking for a superintendent, we have a candidate we are very confident in,” Hays noted. “And we have a contract here to consider.”

With little conversation, board member Darrell Wiatt made the motion to accept the contract, with Travis Lambermont quickly adding a second.

Prior to the vote, Hays read a statement from board president Spencer.

"I feel the board has worked tirelessly and I have no reservation committing my support for the selected candidate," Spencer wrote in part. "I have found this candidate to be qualified and currently a huge asset to her current corporation and community.

"I expect nothing less than similiar positive results if from this candidate," Spencer concluded

Singer replaces Dan Noel, who had been at North Putnam since 2012. He announced in January that he would not renew his contract, then last month accepted the superintendent job at Shakamak Metropolitan School District.

A lifelong resident of northern Indiana, Singer has been the superintendent at Hamilton, one of the state’s smallest schools with 282 students in kindergarten through high school, since 2016.

She said she was approached by people she respected about applying for the job that brings her to central Indiana.

“I look at opportunities and see a great opportunity to put North Putnam on the map in the greater west central Indiana area because it’s a hidden gem that people are overlooking,” Singer said.

From 1998 through 2006, she was a classroom teacher in Garrett-Keyser-Butler Schools, teaching students in fourth- through eighth-grades a variety of subjects, including math, science, language arts and social studies.

She said one important focus will be the the corporation’s mission, vision and goals.

“The direction we provide as a corporation trickles down to the buildings,” Singer said.

Away from the classroom, Singer enjoys running, spending time outdoors and reading.

“I’m not sure what educator doesn’t like to read,” she said.

She also knits, crochets and spins her own fiber.

Singer also finds time for her dog, whom she describes as “the love of my life.”

A graduate of Woodlan, Singer said she pulled up to North Putnam High School and felt like she was at her own school. She particularly noted the school’s strong FFA program, as a former member herself.

“This feels like home,” Singer said. “It’s home, but south.”