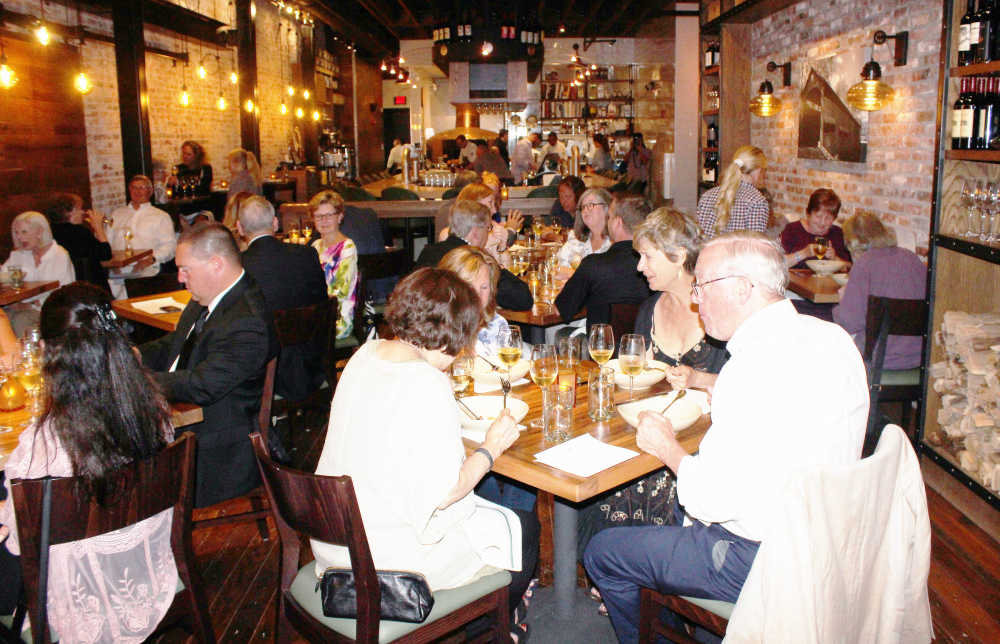 A sold-out dinner at Bridges Thursday night serves as a fundraiser for the Friends of James Beard Foundation, one of 12 sites across the country selected for the undertaking this year
Banner Graphic/Eric Bernsee
Order this photo

With a tradition of hosting creative, elegant fundraising dinners, the Friends of James Beard Foundation annually chooses a dozen sites for its dining destinations.

In 2018, those momentous meals have been scheduled in such intriguing locales as New Orleans, Martha’s Vineyard, Chicago, Phoenix, Tampa, Dallas, Staten Island and -- wait for it -- Greencastle, Ind.

That’s right, the James Beard Foundation -- the oldest and most distinguished culinary foundation in the United States -- chose Greencastle for one of its signature dinners. Or more exactly, it chose Bridges Craft Pizza and Wine Bar at 19 N. Indiana St. for such an event Thursday evening. 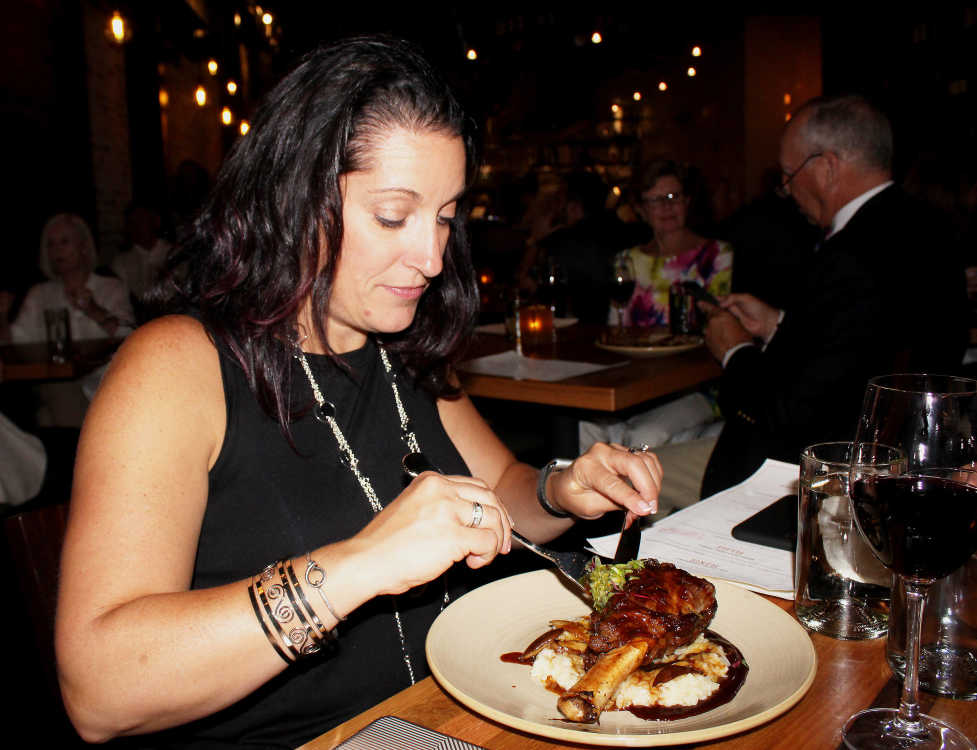 “It’s an honor to be among the 12 chosen,” Bridges spokesman Danita Timmons told the Banner Graphic Friday after the dust had settled on a six-course, invitation-only dinner with wine pairing that drew a sold-out turnout of 100 to the new specialty restaurant on the east side of the Greencastle square.

Chef Sal Fernandez created the meal with the theme “The Farmer and The Chef,” celebrating the contributions of local farmer Bobby Zaring of Fillmore, the DePauw Farm and Full Hand Farms of Pittsboro, all of which provided greens and herbs to accentuate the sizzling stylings of Chef Fernandez. 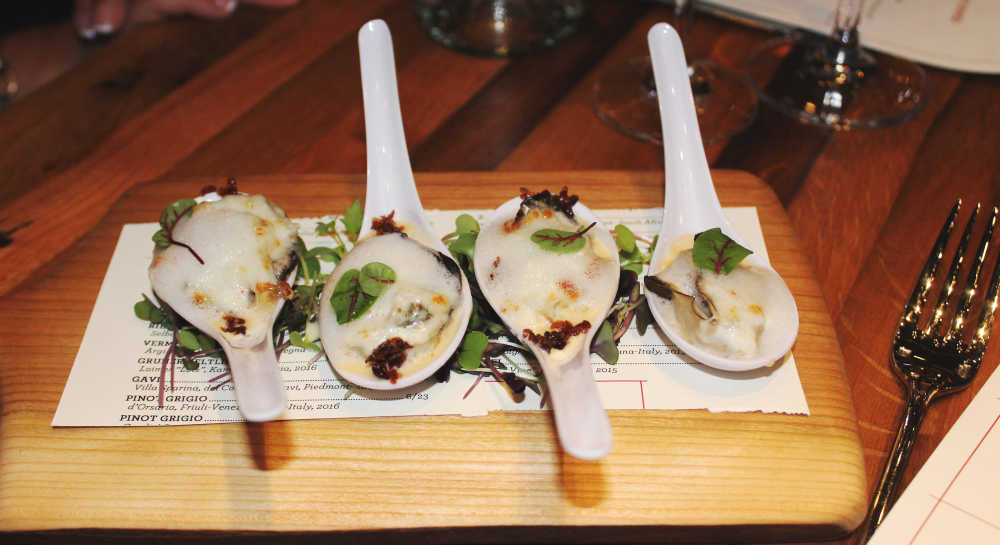 -- Pan-seared halibut with gnocchi and mushrooms, paired with chardonnay from Sonoma, Calif. 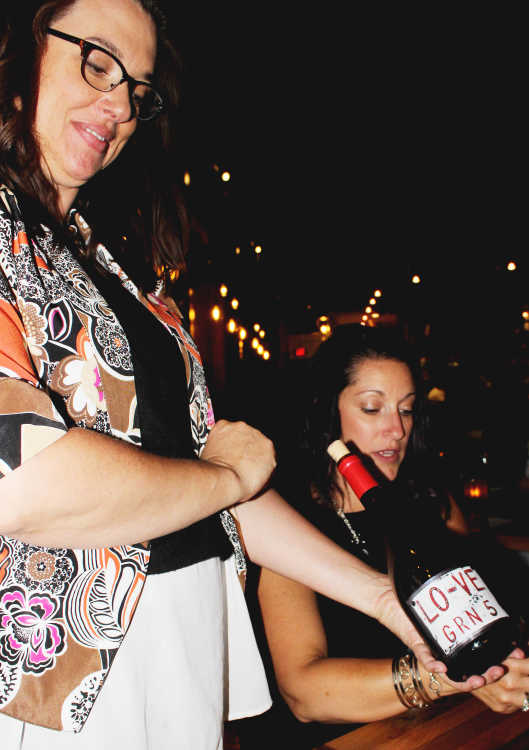 Displaying a bottle of grenacha wine from Rioja, Spain, Danita Timmons of the Bridges staff explains its unique label that copies a license plate from the area that winemaker Arthur O’Connell spotted on wooden carts used for decades to transport grapes from the fields to the vineyard. The “Lo” designates the city in Spain, while “VE” defines it as vehicle especial.
Banner Graphic/Eric Bernsee
Order this photo

-- Cappelletti with spinach pasta, oxtail and more, paired with a grenacha wine from Rioja, Spain.

All of that without even firing up Bridges’ iconic Italian wood-burning pizza oven.

The dinner was a $125-a-person fundraiser for the James Beard Foundation, a New York City-based national non-profit culinary arts organization named in honor of the late James Beard, a prolific food writer, teacher and cookbook author. Its mission is to “celebrate, nurture and honor chefs and other leaders making America’s food culture more delicious, diverse and sustainable for everyone.”

The foundation -- which not only creates programs to help educate people about American cuisine, but also support and promote chefs and other industry professionals behind it -- offers scholarships for students entering a variety of fields, including culinary studies, pastry and baking, hotel and restaurant management, wine studies and food writing. Since its inception, it has awarded more than $4.6 million in financial aid.

The dinners are oftentimes the precursor to nominations for the prestigious James Beard Foundation Awards, considered the “Oscars of the food world,” but there is no guarantee of that link, Timmons assured.

While the dinners are basically a way for chefs to give back to the foundation, she said, hosting one of the culinary feasts “does put us in the eyes of James Beard Foundation members who aren’t familiar with us but it doesn’t technically lead the way to a nomination.”

However, a James Beard Foundation representative from New York, Victoria Rodriguez, drove all the way to Greencastle for the occasion, dining with other special guests like Jennifer Rubenstein of Edible Indy, the magazine and website out of Indianapolis, who joined Bridges owners Judson and Joyce Green in the restaurant’s lower dining area/wine cellar.

Mrs. Green addressed the guests during a cocktail hour that began on the rooftop patio -- reportedly one of only two such venues in Indiana -- and adjourned to the adjoining Music on the Square space once thundershowers began to threaten. She talked of the event being “very special to all of us,” noting the Greens join Chef Fernandez and Bridges general manager Damion Wallace in “the dream of moving toward a James Beard Award.”

They have “inspired the whole staff toward this goal,” Mrs. Green said. “We just want to keep moving forward.”

The Beard Dinner follows a glowing review for Bridges and Greencastle overall in the recent Indianapolis Monthly magazine, which then spawned a visit by Fox 59, Indianapolis, for its morning TV news segment Friday that featured a story Greencastle and DePauw at 6:45 a.m., followed at 8:45 by a live shot from the city and later an interview with the Greens inside Bridges at 9:45.

“It’s really nice for the community to get some positive publicity,” Timmons noted.