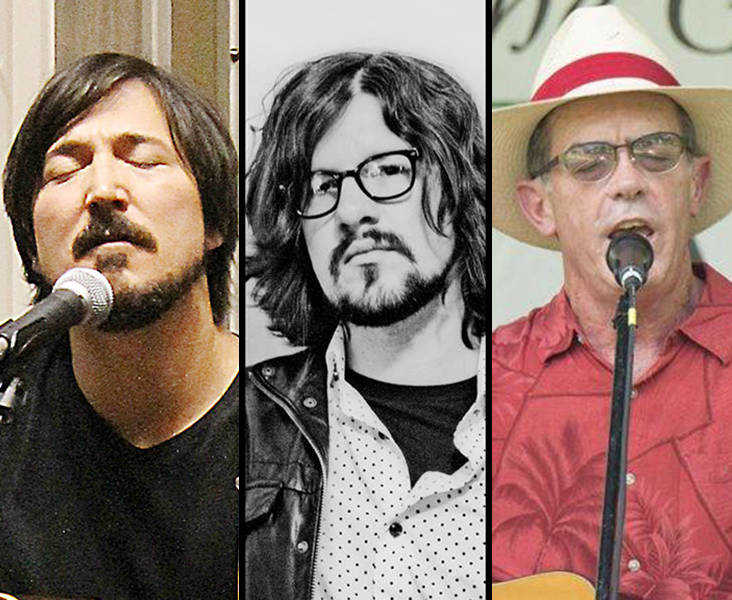 Planning for a triumphant return to Robe-Ann Park on Tuesday, the Greencastle Civic League has enlisted the talents of (from left) Gus Moon, Brandon Tinkler and Chris Wurster for this week’s ParkFest concert.
File and Courtesy photo

It’s been a long time coming but ParkFest, the free concert series staged by the Greencastle Civic League and Greencastle Parks Department for 25 years, will finally return to its true home, Robe-Ann Park, on Tuesday evening.

The 2018 season has been a challenging one so far, with construction of the Robe-Ann Park Bandshell moving several concerts elsewhere and weather forcing the cancelation, postponement or relocation of others.

However, Chris Wurster, Brandon Tinkler and Gus Moon are slated to take the stage at the not-quite-complete bandshell from 6:30-8:30 p.m. on Tuesday.

Music fans are asked to bring their lawn chairs and an appetite for great music to celebrate summer and see the progress of the bandshell.

Guitarist, singer and songwriter Wurster grabbed his brother’s guitar as a teenager and hasn’t looked back since. His performances over the years have danced all over the map, from folk to pop to country rock and even the stylings of his barbershop quartet group, “Whatever Four.”

Tinkler, an independent recording artist based out of Indianapolis, is popular for his soul-soothing performances in local spots such as the Inn at DePauw and Wasser Brewing Company. He recently released his second album “Open Up Your Eyes.”

Singer-songwriter Moon, a ParkFest favorite also known as Anthony Mullis, hails from Bainbridge with his brand of Midwestern folk music. He builds amazing stories into his songs, pulling listeners straight into the hearts of the characters he creates.

The Greencastle Civic League is also asking community members to return to Robe-Ann Park Wednesday morning and bring their appetites for the annual July 4 pancake breakfast from 8-11 a.m. The event features all-you-can-eat pancakes, sausage patties, orange juice and coffee for $5.

Funds support the projects of the Greencastle Civic League and Friends of the Park.

No further schedule has been released for upcoming ParkFest concerts, though the series traditionally runs through the end of July.