It has served the men of Temple Lodge No. 47 F&AM. It almost became the Putnam County Museum.

Now the Greencastle Masonic Lodge could become the next Putnam County Courthouse Annex. 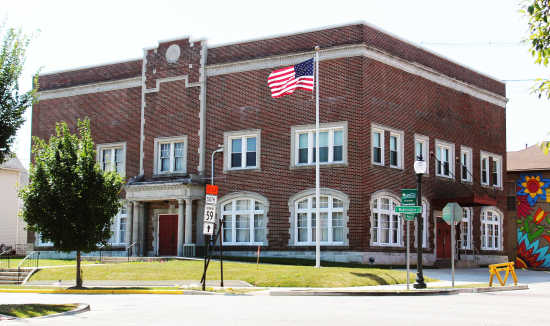 The historic Greencastle Masonic Lodge at the southeast corner of Washington and Vine streets is under consideration as a possible location for a Putnam County Courthouse annex. Banner Graphic/ERIC BERNSEE
Order this photo

It's a move county leaders are at least open to considering.

County Attorney Jim Ensley went before the Putnam County Council on Tuesday to discuss the matter.

"We were approached by the Masons, probably the end of May, about buying their property on Washington Street," Ensley said.

A feasibility study on the matter is about half done, with some of the findings revealed to the Putnam County Commissioners and Courthouse Annex Committee on Thursday morning.

Before getting to any of that, though, Ensley sought assurances from lodge members that the property wouldn't be bought out from under the county as it went through the process of studying the matter.

Attending a recent Masons meeting, Ensley obtained a letter giving the county a 90-day window to complete its study and appraisals.

"I've been told that the powers that be over there gave us the 90-day window because they want the county to buy it," Ensley told the council. "They know we take care of things."

The first official step was a resolution from the County Council expressing interest in the property. That matter passed 5-1, with Gene Beck casting they lone nay vote.

The matter then moved to the Putnam County Commissioners, who met in special session on Thursday morning to move forward with appraisals.

While money has been set aside for an annex from the sale of the former Putnam County Home, the commissioners chose to fund the two appraisals, at an estimated $1,500 each, from the Economic Development Income Tax Warchest.

The motion to hire Helmer Appraisal and Masten Real Estate Services at a total cost not to exceed $3,000 was approved 3-0.

However, neither act makes a move to the 118 E. Washington St. location a sure thing. In a session that followed Thursday's special meeting, the Commissioners and Annex Committee heard from Pyramid Architecture and Engineering regarding the feasibility study as well as the possibility of building a new annex.

Commissioner Rick Woodall discussed the matter with the Banner Graphic, saying that while the building needs some upgrades on the outside (masonry work, ironically), there is grant funding available through Indiana Landmarks for such projects.

The feasibility study has revealed that space would be sufficient in the new location. Woodall said the hope is to move a number of offices not directly related to courts to a location outside of the Putnam County Courthouse.

Besides these, there is storage space and the possibility of more offices in the future.

One of the big worries has been parking, but this has revealed mixed results. On one hand, it appears that employees would have to walk farther, but Woodall said this is not accurate, saying the walk from a pair of free city lots is either the same or about 30 to 40 yards farther. He added that they have considered approaching St. Paul the Apostle Catholic Church about renting a certain number of spaces in its lot.

For constituents, closer parking options would include the street or the Vine Street lot across from the Greencastle Post Office.

Another concern is energy efficiency, with county officials aware that the old building will likely need upgrades in heating, air conditioning and insulation, not to mention telecommunications.

For now, the project remains in the exploratory phase. However, it does represent a change for county officials, who likely find themselves as close to having a courthouse annex since the closure of the old Jones School building nearly seven years ago.