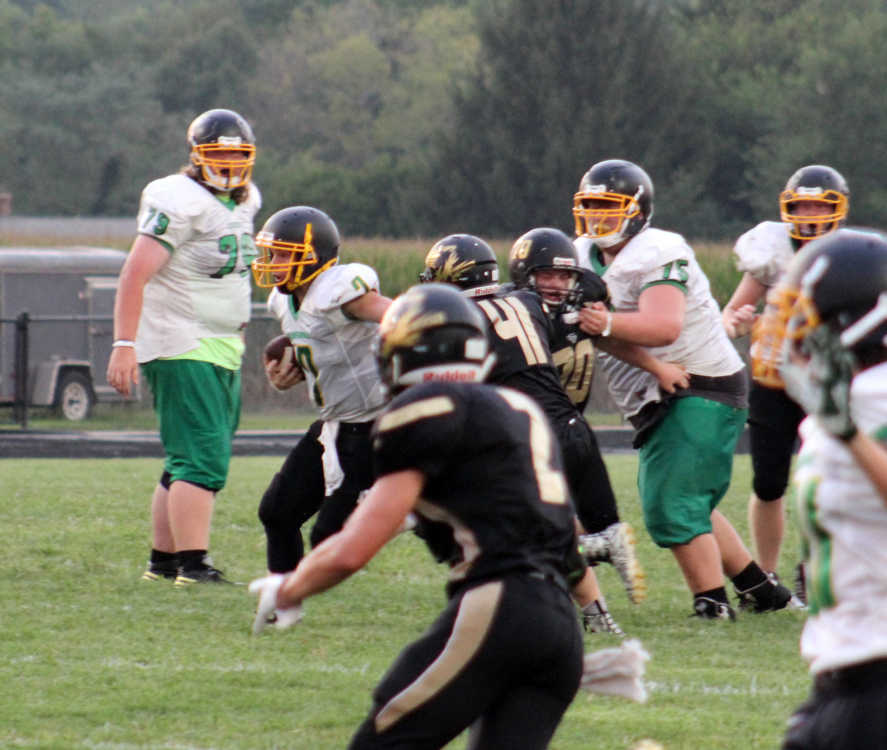 Guards Parker Stevenson and Jeremy Hess (numbers 75 and 79) add a lot of size for the Clovers.
Banner Graphic/JOEY BENNETT
Order this photo

Several key players graduated from that squad, including four going on to play football collegiately — Tyler Kaeff and Tyce Jackson at DePauw and Nick Winders and T.J. Hagymasi at Franklin.

Winders is looking to this year’s senior class to provide the same kind of leadership as those upperclassmen did last fall. 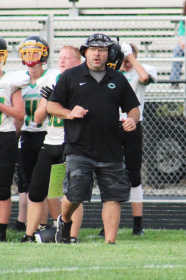 “Practice has gone really well so far,” Winders said. “Our numbers are up from last year, which is good. I thought we played really well in the scrimmage on Friday [against South Vermillion].

“I thought we got off to a slow start on both sides of the ball, but we picked it up after that.”

The Clovers return several key skill position players from last year, but Winders knows that his staff’s biggest task is to rebuild an offensive line that lost all of its starters.

“We lost 11 seniors from last year, and many of those were our front line,” he said. “We are really working hard on this, and rebuilding the line is a big key this year.”

Two big parts of that line will be two players who did not play last season in sophomore Parker Stevenson and junior Jeremy Hess — two large young men who are both around the 400-pound mark.

Stevenson last played in middle school, and Hess had not played since youth league.

“We are extremely glad they came out this year,” Winders said. “They are pretty good sized boys. We have them set up as guards, but they could play tackle at some point.”

Other starting linemen will be senior Dalton Henry at center and junior tackle Trey Dickison.

The other tackle spot will be manned by seniors Jalen Johnson or Brady Szczerbik. 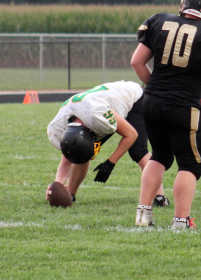 Dalton Henry will take over the center position this year for the Clovers.
Banner Graphic/JOEY BENNETT
Order this photo

Winders likes what Watts brings to his offensive from the physical standpoint, but does not consider that his biggest asset.

“He is a natural athlete with a good, strong arm,” he said. “His leadership skills have really improved, and he’s leading by example. He’s a pretty soft-spoken guy, and the kids all look up to him. When he speaks, they all listen.”

Wilkes ranked 15th in the state last year with 11 sacks, despite a mid-season tragedy in which his father passed away from cancer.

“He had a phenomenal year last year, and I think he’s going to have another one this year,” Winders said. “He understands that this team is leaning on him this year. With his dad passing last year, he had an up an down season emotionally.

“He has come out this year with all of his emotions in check and he’s going to prove a purpose and show he can play at that next level — and I think he can.”

Dickison is the team’s other defensive end, and Winders foresees greatness for him as well.

“He’s a young kid but I believe he will probably be one of the best players to ever come through Cloverdale,” Winders said. “He is a very talented kid. He’s going to have a breakout year this year.” 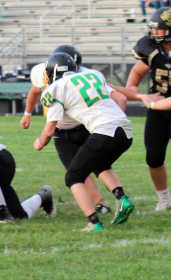 “Johnson is a returnee who can play multiple positions, and we’d like to get Stevenson’s size out there,” Winders said.

Caydhan Stevens shapes up at a linebacker, along with Smith and Trevor Woods.

In the secondary, cornerback is another spot which will have new faces.

Freshman Hunter Fox is going to be “someone to watch,” Winders said, while DaShawn Highbaugh will use his quickness to man the other spot.

Senior Wyatt Helterbrand will take the place of another departed graduate in Drew Boyette at safety.

“He lacks height, but his knowledge of the game is unmatched,” Winders said. “I can’t think of anyone else I’d want to put back there.”

Despite many new faces, Winders expects the improvements in the program to continue.

“It took us a few games last year, but once we got things going we got on a roll and did well,” he said. “That was a big credit to our seniors last year, but this year’s seniors were a part of that too. This year I believe we’re going to carry on that momentum and tradition that we got started in Cloverdale football.”

The Clovers opened last season with a loss to South Putnam, which recorded its only regular-season win in that game.

“I think we can have a similar season to last year, but hopefully we can start off a little bit better than we did then,” Winders said. “The seniors know what it meant to those seniors last year, especially when it ended. Football is an emotional game, and they saw how much emotion those seniors put into it. They know what it’s going to be like, and they want to carry on the momentum and carry into this year.” 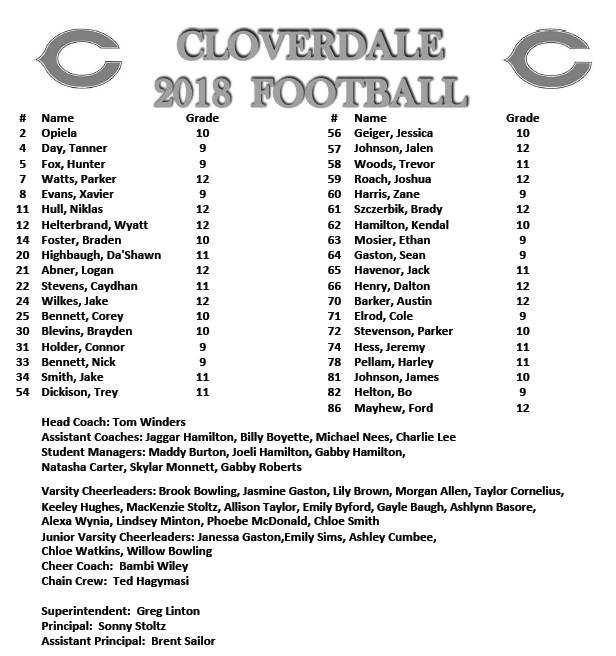