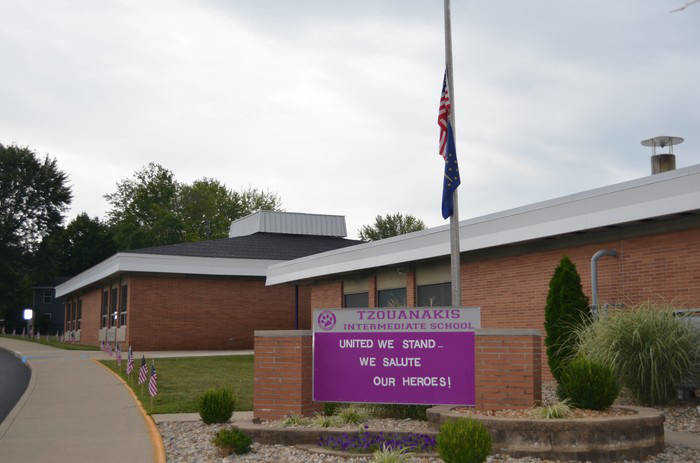 Students out of school Tuesday, rest of week to be determined

Tzouanakis Intermediate School is closed Tuesday and students and teachers will be at temporary locations at least through the end of the week.

The Greencastle School Board announced during its regular monthly meeting Monday that mold issues in the building led to the decision to move classes elsewhere until more is known about a mold problem in the building.

While a tentative plan to relocate students to other district buildings was shared during the meeting, a later automated call from Superintendent Jeff Hubble superseded this.

Tzouanakis students will not have class on Tuesday as district officials formulate a plan for the rest of the week.

After taking the unusual step of tabling almost every item of new business on the agenda, board president Mike White announced that the remainder of the meeting would be devoted to one specific issue.

“We discovered at 4:30 p.m. today that the mold level in TZ has not been appropriately measured,” White read. “We were led to believe that TZ was operating within safe mold limits, but we now realize that we do not in fact know what that level has been. We have been measuring humidity, temperature and CO2 levels since July. However, we have not been measuring the level of mold.

“Despite the inappropriate measure of mold, the school has worked to eradicate visible mold from the building on a daily basis,” White continued. “Our custodians should be recognized and thanked for their hard word.”

The statement continued with the board’s and the administration’s decision on a course of action.

“As a result of this discovery, as a board, we are not comfortable sending students and teachers into the building until mold has been measured at a safe level. We have asked Mr. (Superintendent Jeff) Hubble to close TZ until the mold level has been accurately assessed and is at a safe level.”

Hubble then shared a plan to divide the grade levels between three other buildings in the corporation.

However, logistical concerns expressed by teachers seem to have moved administrators in a different direction.

After 10 p.m., Hubble sent out an automated call and email to all Tzouanakis parents explaining the plan for Tuesday.

“We have made the decision to close TZ tomorrow (Tuesday) due to air quality concerns,” Hubble said. “Students in third, fourth and fifth grade will not report to school.”

Hubble went on to announce an alternative plan for parents who cannot get other childcare on short notice.

“If this presents a childcare issue that cannot be resolved any other way, then we will be providing child care at the McAnally Center located next to Greencastle High School,” Hubble said.

Parents choosing this option are asked to drop off their kids on the east side of the building after 8 a.m. and to be prepared to pick them up after the bus transfer lot is bus-free, at or after 3:30 p.m. Students may ride their normal bus if they have no ride options.

The plan for the rest of the week will be provided on Tuesday.

Regardless of this decision, no students will be in the Tzouanakis building for the rest of the week and teachers are only to go in to retrieve items that are necessary and can be taken from the building.

This will give a third-party contractor a chance to do three days’ worth of testing from Tuesday through Thursday.

Then on Friday, with complete results in hand, school officials will be able to make an informed decision on a plan moving forward.

Both White and Hubble emphasized multiple times that the mold is not necessarily at unsafe levels. Officials simply do not know at this time.

Hubble then explained how the school had gotten to this point.

The administration and the board have been aware of a humidity problem — and therefore a mold problem — in the building since mid-July.

The source of the problem is being attributed to something going wrong with the installation of a new air conditioning unit earlier this year.

“We have been aggressively attacking any visible mold that’s in the building,” Hubble said. “But for mold to be visible, it has to be present in the air.”

While officials knew mold was present, they believed it to be well within acceptable limits for human occupation.

The problem that was only discovered on Monday is that the testing that has been performed has been only of humidity, temperature and carbon dioxide.

Hubble believed that the carbon dioxide levels being provided to him were a measurement of mold concentration.

Where the fault for this lies remains an open question. The board has been working with Peine Engineering on this problem, with Peine providing the testing equipment that’s been in use.

“Somewhere in the communication from Peine through the people that were trained to use these instruments to Mr. Hubble, the carbon dioxide readings were taken as mold spore readings,” White said.

The question that remains to be answered is exactly where in this chain the wrong information originated.

Of course, parents in attendance had a number of questions regarding the issue, particularly why they weren’t notified of the presence of mold in the building, regardless of the relative safety of the level.

“I find it very hard to understand why mold has been growing in the school and I’ve known nothing about it,” parent Suzanne Masten said.

Hubble assured her that he was acting in good faith on the information he was given.

“The numbers that were being reported to me were way lower than the number for caution,” Hubble said. “In my decision, the environment was safe.

“I would never in good conscience put a child in harm’s way,” Hubble said. “Given the information that I have, I would have sent my sons to school.”

Another Tzouanakis parent, Brian Waugh, expressed concerns that school officials were not more transparent from the beginning.

“My dad always told me if I got in trouble it was going to be 10 times worse if he heard it from somebody else,” Waugh said. “I haven’t heard from you until tonight for something that she said has been going on since summer. I’m having the find out from friends, from teachers, from other educators.

“A simple, ‘This is what we found, we’re working on it,’ would have been acceptable.”

He added that while teachers knew about this, they did not let the public know, perhaps in fear of stepping out of line.

“These are our teachers. We should be bending over backward because it’s a hard job, it’s a thankless job,” Waugh, a first-year guidance counselor at Terre Haute South, said. “They’re expressing their concerns. The reason I’m bringing this up is because whatever policy you have in place right now sucks. It does not work.”

White did not dispute these sentiments.

“I absolutely agree with you that something should have been said to parents,” White said. “I don’t think anything was ever said to the staff that they couldn’t talk about it, but since nothing was being said from Central Office.”

A number of other concerns were expressed as the two-hour meeting continued, including the logistics of making the move, many of which remained up in the air as of press time.

“As a board we’ve kind of charged Mr. Hubble and Dr. (Assistant Superintendent Donovan) Garletts with making that very bad situation as smooth as possible,” White said.

“We have been working with teachers as well as we can with the information we have,” Hubble said.

Once readings are available on Friday, that information as well as a plan moving forward will be made available to the public.

A number of other concerns about the process were expressed, but the board had few answers for these on Monday night, other than to note that it will affect how the school does business in the future.

“Our expectation is that after this week, we’re going to be having some pretty hard conversations with the people that we do business with,” board member Bill Tobin said.

Through all of the concerns, Hubble continued to emphasize that the closure is only precautionary in nature at this point.