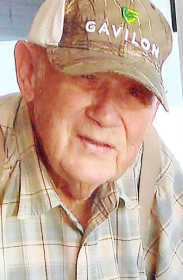 He was born Aug. 22, 1931 in Indianapolis, the son of Franklin Josiah and Vada Jane (Smith) Baker.

He was a graduate of Bainbridge High School.

He was a veteran, having served in the United States Air Force.

Jerry owned and operated the Rockhurst Barber Shop on the west side of Indianapolis for more than 25 years.

He was a member of the Bainbridge United Methodist Church; Greencastle Masonic Lodge and Eastern Star, VFW and the American Legion.

He was preceded in death by his parents; granddaughter Jaycie Kim Lane; brother Dale Baker; and a sister, Naomi Elliott.

A celebration of life will be held at the Bainbridge Community Center on Saturday, Sept. 1 with the family receiving friends from 2-5 p.m. and a memorial service to be held at 3 p.m.

A private family inurnment with military honors will be held at a later date at Union Chapel Cemetery.

Memorial contributions may be made, in lieu of flowers, to the Bainbridge Alumni Association.

Condolences and memories may be shared with the family c/o www.Hopkins-Rector.com