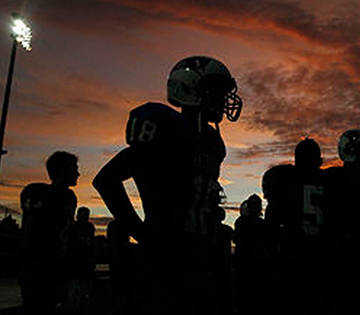 In a high school football game during which the weather was atrocious, the mood of a team can make a big difference.

The Greencastle Tiger Cubs were in a much better “mood” after their 12-0 victory over South Putnam on Friday night. Greencastle improved to 4-0 on the season and 2-0 in Western Indiana Conference play. South fell to 2-2 and 0-2 in the WIC.

The Tiger Cubs were led on both sides of the ball by Damon Moody who rushed for 109 yards, scored a touchdown recovering a fumble in the end zone, picked up a safety on the defensive end and forced another fumble.

The first quarter was actually played in pretty good conditions and the Tiger Cubs took advantage on their first drive.

The Eagles took over on the 20-yard line, but two plays later, the skies opened up and torrential rains began soaking the field. South was forced to punt, but a bad snap ended up in the end zone and Moody was able to score the game’s only touchdown. Lezama added the PAT to put the Tiger Cubs up 10-0.

“We were able to get a field goal early and then they gave us one down there on the punt,” Meyer said.

The rest of the second quarter was a battle, not only between the two squads, but against the elements.

The rain continued throughout the quarter as neither team could generate any offense. The rest of the half was played in the middle of the field with neither team taking any risks.

“It was really tough out there. We made some mistakes in the weather and they were able to take advantage,” South Putnam head coach Nathan Aker said.

The rain slowed considerably at halftime, allowing Greencastle to crown Andrew Fajt and Kensie Bumgardner as its homecoming King and Queen, but the field was still in bad shape as the teams squared off to start the second half.

“I said at halftime that the team that had the most fun was going to win the game. Both teams had fun playing in this type of game, but we they took advantage of a couple of our mistakes,” Aker said.

The Tiger Cubs were able to take advantage of great field position early in the third quarter. A Greencastle punt pinned the Eagles at their own one-yard line.

Three plays later, Moody tackled Xavier Langley in the end zone for a safety. The Greencastle special teams was a difference in this game. Alex Costin consistently pinned the Eagles deep in their territory all game long.

In addition, the Cubs picked up a touchdown on special teams and a converted a field goal.

“Our special teams were good tonight. This game was a matter of who made the least mistakes and we were able to make fewer mistakes,” Meyer said.

The sloppy field limited the teams offensively. Greencastle managed to pick up 92 total rushing yards on the night, but that was including 45 yards of negative plays due to field conditions. South couldn’t move the ball much either as they picked up only 69 total yards of offense. The field conditions limited the last three quarters to just straight ahead runs.

“I thought our offensive and defensive lines played well tonight, but it was really difficult to move the ball,” Aker said.

Field position in a game like this was key. The Eagles were only able to run four plays the entire second half in Tiger Cub territory. Greencastle was able to punt the ball deep and rely on its defense to keep the Eagles grounded.

“We were able to control the field position. That was really important tonight,” Meyer said. “It was really good to be able to get another shutout.”

Greencastle was able to post its second shutout of the year and has only allowed 30 points in four games on the season.

The sloppy field yielded numerous fumbles on the night as the teams combined for 10 fumbles, two interceptions and numerous slips and slides. Greencastle will at least have time to make some field repairs as they travel next week to Cascade and the following week to Sullivan. South will host Edgewood next week for its homecoming game.

“It was great to get a win against a county school, it was tough for both teams tonight,” Meyer said.