The Lions will hold the event over the 1,800-foot-long, 140-foot-high Newport Hill, once a proving ground for early automobile designs.

Nearly 300 cars are expected to compete in 31 classes in timed runs over the hill, while some 500 show cars, street rods and street machines are judged alongside classic antique vehicles in nine classes. 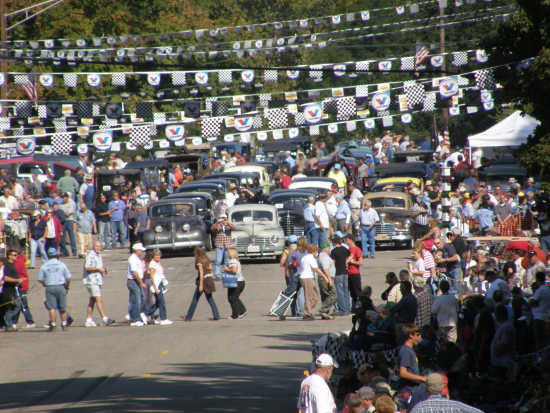 Among early registered competitors is a rare 1919 Stanley Steamer Touring Car. The last Stanley to run the hill was driven a few years back by company founder E.F. Stanley’s granddaughter.

This year’s the festival weekend will begin Friday, Oct. 5 with flea market and food concession stands open all day. That night will feature the “Cruise at the Bottom” cruise-in and a street dance.

With the hill open for practice runs at 8 a.m. Saturday, some 300 flea market and swap meet booths will be open for business, as well as numerous food concessions around the courthouse square. Big Wheel Races for kids age 3-8 will also begin at noon Saturday with a Pretty Baby Contest judged at 2 p.m. Shortly afterward, the annual parade will wind its way through the streets of Newport.

The Collector Car and Automobilia Auction will be held on the Main Street Starting Line following the parade.

“Dancing With The Cars, a Cruise-In and Street Dance are set Saturday evening with the day capped off by a fireworks display at dusk.

The festival will conclude with a drawing Sunday afternoon, including the Lions Club’s restored raffle vehicle, a 1939 Buick Series 40 Special four-door sedan with a Buick Straight-Eight power plant.

The Newport Hill Climb likely began as an “innocent” challenge between two owners of new-fangled automobiles. While early autos had trouble making it up the crest of the hill, soon topping the 140-foot plus hilltop became common, but still a great struggle for early gasoline engines. Then it wasn’t just enough to top the hill; you had to be the fastest to climb it.

The first Hill Climb was run in 1909 and organized by Newport businessmen as a way to capitalize on interest in climbing the hill. Hill climbing contests were becoming more common place, and by 1915 the “newness” had worn off, and board track and other circular racing forms became more popular.

The event was rekindled as an antique auto hill climb in the 1960s and the Lions Club took over sponsorship in 1968.

More information on the Newport Antique Auto Hill Climb is available by calling 765-492-4220 or on the internet at www.newporthillclimb.com.