A special project undertaken by DePauw University students and professors that has been ongoing since the beginning of last year will soon come to a close.

The deconstruction of the house next to the former campus farm (1521 W. CR 225 South) is part of an experiential program focused on how materials used in the building's construction can be recycled and repurposed.

The remains of what many still remember as the “Jones Property” will be taken down in the coming weeks.
Banner Graphic/Brand Selvia
Order this photo

With that in mind, the project has uncovered various aspects of the home's history and architectural substance, as well as the environmental makeup of the land that it sits on.

Under the tutelage of Professors Jennifer Everett (Philosophy) and James Mills (Geosciences), students from varied academic disciplines have contributed through the university's Environmental Fellows program, a four-year program focused on addressing environmental challenges.

The land on which the farm house is situated has a history that stretches back to before the Civil War.

Students from a seminar class taught by Everett in the fall of 2017 found that while the house has existed from as early as 1864, the change of ownership of the property as a whole is somewhat sporadic.

Drawing on the research conducted by Environmental Fellow Cecilia Slane, the property on which the farm house sits was deeded to Joseph Lemon and his wife Minerva in 1826. They then transferred the property to William Lemon (presumably their son) in 1834. William then sold it to the Secrest family in 1835.

The Secrests had joint ownership of the home with Clinton Falls for a short time. The property was partitioned into two parts, with one part that included a steam mill going to Peter Albaugh in 1845, and the other to a Thomas Gibbs in 1849. The Albaughs would own their piece for almost 30 years.

James Torr purchased 80 acres from Philip Albaugh and John Moss in 1874. That land was sold to James Brandon in 1882 for less than the $5,000 Torr purchased it for. The Brandons would eventually sell the property to the Young family in 1895, who then gave a right-of-way to the Indianapolis & Western Railway.

Charles Foxx purchased the home from the Youngs in 1921, and the Foxxes would own the property until 1978. They sold it to Larry Jones and Brenda Mishler in that year. Jones finally sold the farmhouse to DePauw University in 2006 for $1. The "Jones Property" was then used as headquarters during the construction of the Prindle Institute for Ethics and the Bartlett Reflection Center.

The campus farm was later built beside the house in 2013. The house has effectively sat vacant since then, with students and faculty having used the property intermittently to do work on the farm until it was recently relocated. In the summer of 2016, the university closed the building citing the house's poor state.

With the boarded up building being slated for destruction, both professors found the perfect opportunity for DePauw students to get involved in their community and put their liberal arts education to good use.

According to Everett, the project began out of a suggestion specifically from Chris Hoffa, who is the director of facility systems operations at DePauw.

"Chris suggested that we do something, anything, with the house before it had to be torn down," she said. "Nobody needed the building, so the idea for the deconstruction came about from that."

Everett knew that students in the Environmental Fellows could go out into the field and engage in conducting research, analysis and organizing data. 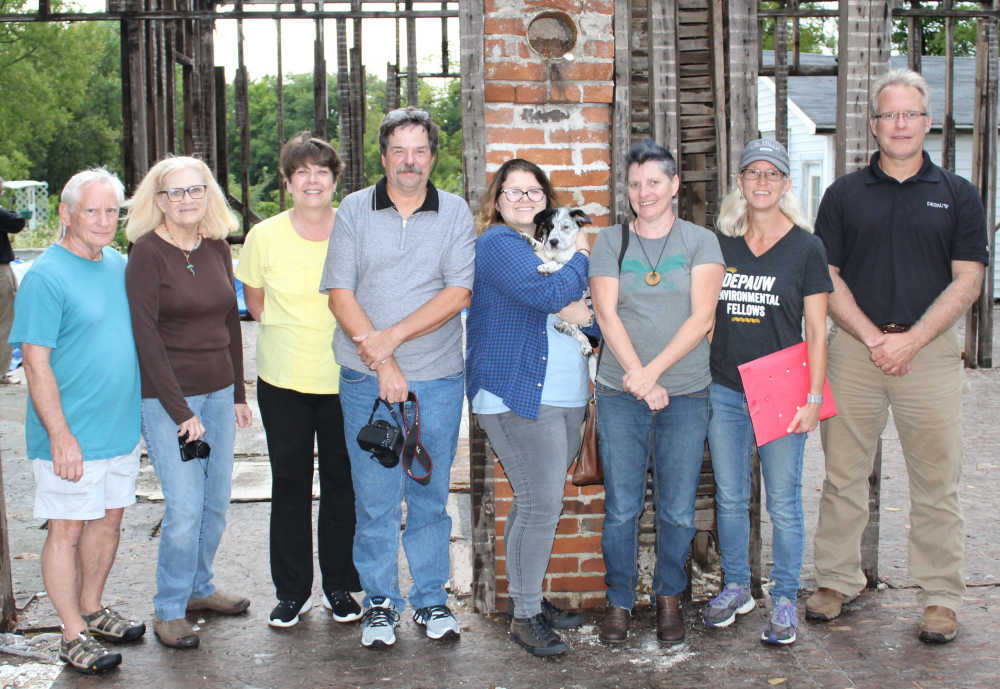 Standing in front of one of the brick chimneys are (from left) Mike and Vicki Grove, Marcia Foxx Boswell, James Mills, Cecilia Slane, J.D. Grove, Jennifer Everett and Chris Hoffa. The Groves are descendants of the Alsbaugh family, who owned the property in the mid-1800s. Banner Graphic/Brand Selvia
Order this photo

Not long after the farm house was condemned, she set about tailoring a course that would use its tearing down as a kind of experiment, instead of simply letting the house be bulldozed and having the debris hauled to a landfill.

In the fall of 2017, Everett offered a course titled Deconstructioning DePauw's Farm House: An Experiment in the Study of Stuff, seeking to bring together students and faculty from different fields to, as provided in the course description, "explore scientific research, scholarship and artistic works that reconceive the stuff we produce, consume and throw away."

As a first-year seminar, the course is essentially divided in two parts. Work in the classroom focuses on literature discussing how a sense of home is created, accompanied by researching the chain of ownership. Students visited the Putnam County Public Library, as well as the courthouse and the Putnam County Museum, to gather records on the property.

The second part consists of a separate experiential study at the farm house. The property became a working laboratory where material could be gathered and analyzed. The environmental aspect focused on what was actually used in the farm house's construction, and how it could be repurposed.

That's where Mills came into the bigger picture. "Jim made the work on the house possible for us," Everett expressed.

The work done by him and his students has revealed that much of the building material was sourced locally. This gave a clearer picture about the house's relationship to the environment on which it is located, as well as its connection to Putnam County history.

"Almost all of the lumber is tulip poplar that was cut down nearby," Mills explained. "The plaster is limestone-based; the foundation is also made of locally sourced limestone."

Mills said that the bricks were a pumpkin brick that was made not all that far from the building site based on the number of kilns that were found. His students determined that even the nails used in the construction were made in a local factory.

The project also called on the expertise of Darrin Rubino, a biology professor at Hanover College who specializes in wooded plants. Rubino helped the team date samples to determine what kind of wood was used and how old it was.

However, Mills' main interest was how the land on which the house sits was influenced by the successive generations that lived there, in addition to raising awareness about sustainability.

"We found that the property was primarily agricultural land, and we had to think about how that land was used," he said.

Mills' students used Google Earth and old aerial photos to get their bearings, and synthesized this with the property's history. He found evidence of a landfill that was established around 1940 and continued to be used until 1960. Another landfill nearby was used by the city from 1978 to 1986.

Mills said that getting a lay of the land was important for research, and for getting a hands-on understanding of the environment's makeup and the hazards the project presented.

After all of the one-day-a-week effort taken into account, about 100 students from different fields of study have had a hand on the deconstruction. The community at large has also had a stake in the project through take-away events in June 2017 and April of this year, while input from members of the Foxx and Jones families have contextualized the farm house as a home.

DePauw students who have worked on the project have collaborated to bring the house's history into a new light. One of the groups helped Lisa Mock, executive director of the Putnam County Museum, create an exhibit that featured different materials from the site.

In the next few months, the project will come to what will surely be a satisfying close. Those involved with the project threw a "farewell party" for the farm house Tuesday evening, and the remaining walls are beginning to be dismantled. It is anticipated that the last of the debris will be removed before November.

However, the farm house's legacy will be grounded in the evidence that has been collected, and how we think about the "stuff" our homes are made of.

"It's been a wonderful research project," Mills said. "It has drawn upon different backgrounds, and it has taught my students how to do research, and to think about 'why' and unravel those complexities."