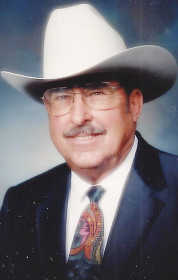 He graduated from Amarillo High School. He proudly served in the U.S. Army 10th Infantry during World War II from 1943-1946.

He earned his Bachelor of Science degree in agriculture, with a major in animal husbandry from Texas Tech University in 1951.

Al worked for Trinity Portland Cement Co. He later became an auctioneer and worked for Williams and Web Auctions.

In his spare time, he was a Boy Scout leader and was active in Kiwanis Club.

He was a hunter in his younger years, and also enjoyed landscaping. He was a longtime member of First Baptist Church.

Al was preceded in death by his parents; a sister, Ivaughan Rattan; and a brother, Carter Veazey.

Survivors include his wife, Joan Veazey of Amarillo; a cousin, Tracy Ball and wife Teresa of Amarillo; brothers-in-law and sisters-in-law, Jack and Shirley Whitley of Mechanicsburg, Pa., Jimmie and Bobbie J. Arnold of Westfield, Ind, and Wilma Wallace of Coatesville.